So, how does a superhero or even an anti-hero kill a kid? That’s the tough question that Joe and Annie have to answer. Brimstone wants to see everyone burn. Jack, the creepy guy who was stabbing kids last issue, presents a similar problem. Facing an army of armed children under the control of Slackjaw, “The Kids Are Still Not Alright” Part 2 ends with a choice that will haunt Joe and Annie for the rest of their lives. However, long that is.

Slackjaw is a creepy Pied Piper with a Peter Pan complex. His deal with The Salesman was a promise to stay young forever and always have friends who would play when he wanted by staying young with him. When his parents tried to take him away, he made his deal with The Salesman. The first thing Slackjaw did when the deal with The Salesman was complete was to make his parents go away. The best part about Slackjaw is that he is just a kid. Brimstone snatches the white porcelain mask with red streaks from the boy’s face to reveal the terrified expression of a little child. It’s a heart-wrenching scene that is captured beautifully by Denys Cowan. 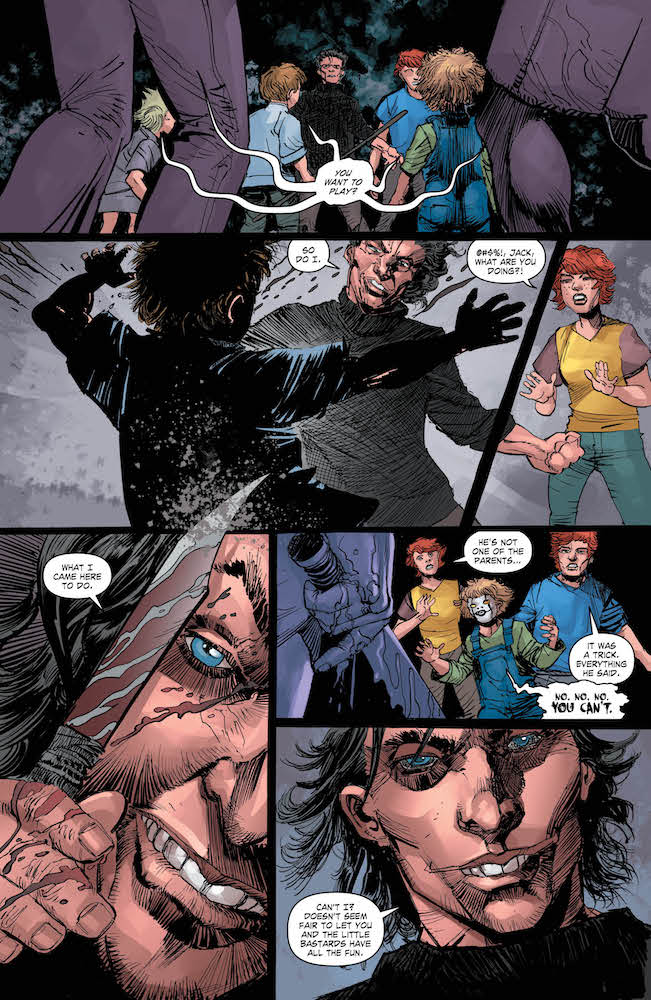 Jack is a great mystery. He loves stabbing kids with zeal, but he has no interest in stopping Slackjaw. He makes Joe and Annie think he is a survivor when they first met in issue #5, but his attitude and willingness to kill don’t fit the profile of someone suffering from trauma or grieving. He is clearly playing a long game that feels like it is one part con man and one part diabolical strategist.

Now, who can tell me the difference? Leave your answers below.

I like the moral question of how severely Joe and Brimstone are willing to act to stop Slackjaw.

Are they willing to kill a child?

The answer is no. When he gets the upper hand, Brimstone’s choice to remove Slackjaw’s mask breaks any connection to the power of the deal that the boy made with The Salesman. Faced with the decision to kill a boy who is no longer under the influence of Slackjaw, Brimstone hesitates and turns back into Joe. He thought that Slackjaw was an adult in the form of a child. The image of this innocent face fractures Joe’s initial resolve to kill Slackjaw. 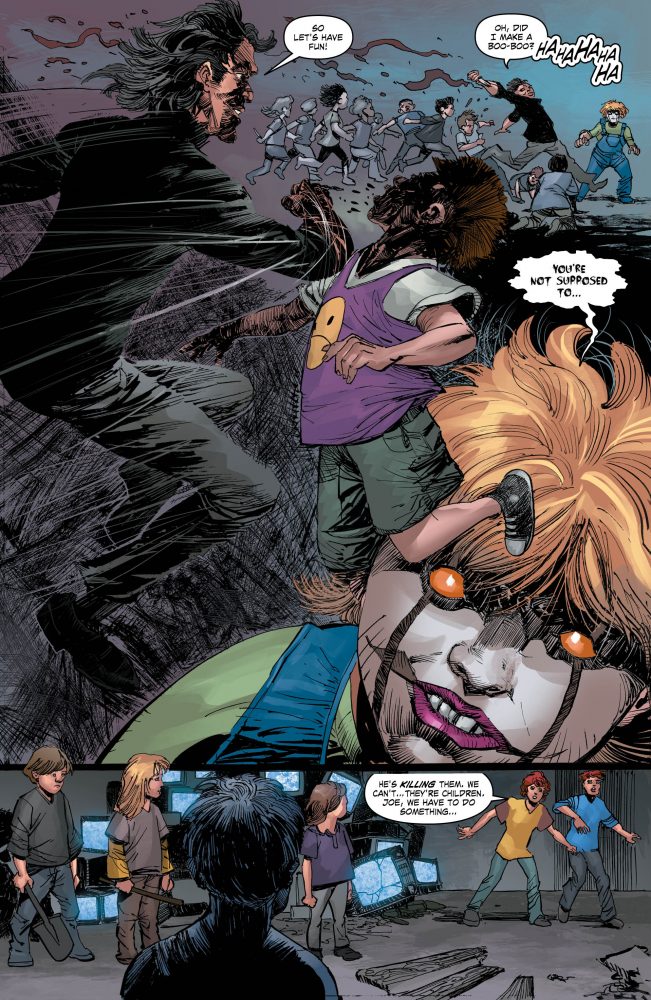 I had a real problem with the way that this issue ends. Nothing is done about Slackjaw. Annie gives a hopeful suggestion that as long as the boy is away from others and not wearing the mask he will probably be fine. I appreciate that there is a great deal of honesty in the tone of Annie’s explanation that she just did not know what they should do. That doesn’t mean that they don’t have a responsibility for who Slackjaw is and can become, and the fact that they can do something about it. I know that this means we will see Slackjaw again, and I love recurring characters who are scary, but I felt the lack of a decision weakens one of the stronger attributes that made Annie and Joe so compelling.

This was a tough one. There are no easy answers when you stack heroic morals against the willful violence of a child who can kill you and must be stopped. It’s Kobayashi Maru all over again. But, instead of making the wrong choice, or even cheating, Joe and Annie have accepted things the way they are, and this is a moral dilemma that will continue to create more problems for Joe, Annie, and Brimstone in their quest to stop The Salesman.

Robin Wright Will Return As Antiope In Wonder Woman 1984