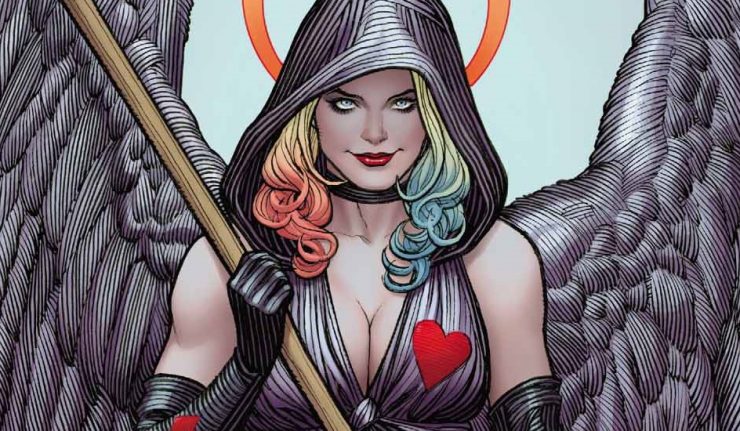 “Clown for Hire” Part Two is a fun fuelled epic comic this week. Harley’s back from her trip to Apokolips, only to find out that her home is about to be demolished! She needs to come up with some money and fast! First trying her hand at some rather mundane jobs in the last issue, she finds a job listing online for a bounty hunter.

Leading her on a hunt to kill Lord Death Man, who can’t be killed. This leads to much confusion, and desperation from Harley as she attempts to get the money to save her apartment.

Please don’t ever get rid of Tina. She is an absolute diamond. I love her and her character. To be able to go from feeling right at home on Apokolips, to not being able to deal with going up the street to buy groceries. Honestly, I think she’s my new favourite character ever.

I also love Harley’s go get em attitude. She’s known for her spunky attitude, but this issue shows her grit and determination. What I also love about this issue is the fact that Harley’s not doing it for herself. She’s getting her apartment back for her friends, every time she feels giving up someone gives her a speech that makes her keep fighting.

Okay, so I was left feeling very confused at the end of this issue. There were a couple of things that came up in this comic that I am left just staring at the page about. I won’t spoil them for you, but when they come up, you’ll know.

Give Tina her own series.

Harley’s a great person who’s trying to be the best friend she can, in her own roundabout way.

Humphries needs to sort out some of this mess in the next issue.

Well worth a read. Especially if you appreciate a little crazy.