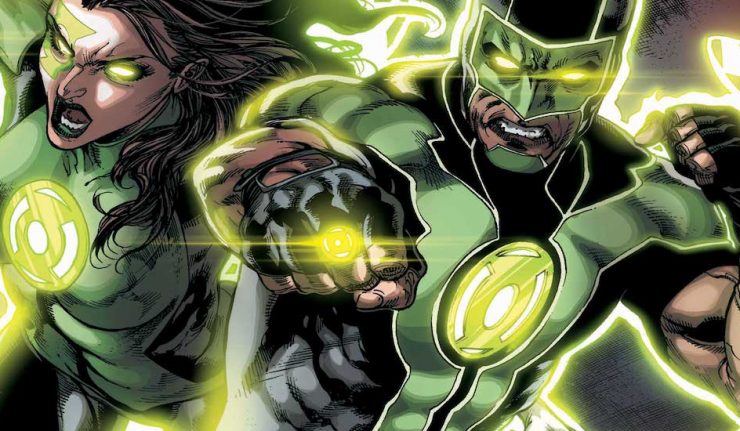 The end of Dan Jurgens brief run on Green Lanterns is on its way.

In the latest issue, Green Lantern Simon Bak finds himself accused of murder after his ring is compromised.  The Lanterns find themselves in a face-off with Cyborg, Superman, and Hank Henshaw, who is responsible for the ring sabotage.  This will culminate in a battle between Green Lantern Hal Jordan and Hank Henshaw, a rematch from their Coast City showdown that was also written and drawn by Jurgens.

Recently, Dan Jurgens spoke about his closing of the Green Lanterns story that will lead to his team up with Grant Morrison in the relaunch in The Green Lantern.

“I’m aware of consistency with the characterization and everything that was already in place?  the answer to that would be yes.  Both Baz and Jess have their fans out there and I certainly want to be true to those characters.  I think thats important.  I certainly want to be aware of their earlier and earlier appearances as well as how they have progressed.  I think it is important to be true to them more the way they are now than the way they were then, because they have changed. Part of my concept here was to say that these rings are all connected by a single power source.  If they start to think of it like computers on the internet and they connectivity that is there, to me once you start to mess with one ring, you kind of start to mess with all of them.  I see a level of connection among the Green Lanterns.”

It’s going to be interesting to see how the Green Lanterns series ends and how it will lead to the rebirth of Hal Jordan in The Green Lantern and where Baz and Jess will fit into the new series.