If there’s one thing popular fiction has taught us by now, it’s: never make a deal with the devil! And yet Mister Miracle is still listening when Darkseid approaches him with just such a devilish proposition—if Scott sends his newborn son to Apokolips, there will be peace on New Genesis. Since when has Darkseid been famous for his honesty?! It’ll be a miracle if this doesn’t blow up in Scott’s face.

This issue, we finally reach the confrontation with Darkseid that the series has been building towards. Darkseid has offered to end the war between Apokolips and New Genesis and give up the Anti-Life Equation if Mister Miracle will hand over his son to be raised on Apokolips like Highfather did with Scott. Finding himself trapped in such a horrific dilemma, Scott finds a possible escape: assassinating Darkseid.

The story is an odd mix of drama, action, horror, and humour. We are shown the grisly sight of Darkseid gouging out his own eye, so that he is unable to use the Omega Effect, which is necessary for him to utilize the Anti-Life Equation. Even worse, Barda crushes the eye in her fist.

Contrasting this is the running gag of Scott and Barda bringing Darkseid a veggie tray. When they arrive on Apokolips, they are asked if they have any weapons. Barda says, “I have a stroller,” and Scott “I got a veggie tray!” He further expounds. “Never underestimate the power of a good veggie tray.” 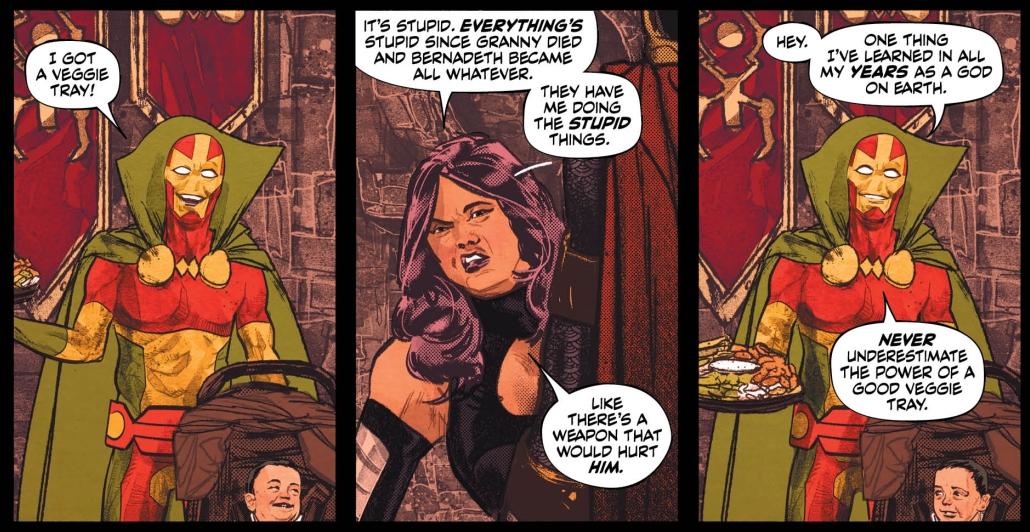 We also get treated to the truly bizarre sight of Darkseid munching on a baby carrot from the veggie tray. In this scene we see Darkseid’s malevolence demonstrated when we witness him double-dipping the carrot. And then there is the even stranger sight of baby Jacob grabbing Grandpa Darkseid’s nose.

After Darkseid’s act of self-mutilation, Barda attacks him with a weapon powered by energy from the Miracle Machine, a reality-shaping ultimate weapon introduced in a 1968 adventure of the Legion of Super-Heroes. However, Darkseid proves impervious to even this weapon. We once again see a black “Darkseid is.” panel, after which Darkseid adds. “Yes. I am.”

After receiving a severe beating from Darkseid, the weapon that truly can bring Darkseid down is revealed. King has been masterfully laying the groundwork for this scene throughout the whole series. When Scott details how he constructed this weapon, it calls back to a number of facts revealed in earlier issues. Even though this review contains spoilers, I am deliberately being vague here, as I really feel you should read the reveal in the story and not here.

And how did the Frees conceal these weapons? Well, maybe they weren’t entirely joking when they were asked if they had any weapons.

But the really mind-bending part of the story is what happens now that Darkseid isn’t. Desaad reveals that he is really Metron in disguise and tells Scott. “Where you are is not where you should be, Scott Free.” And then we see a vision of the heroes of the DC Universe. We can tell it’s the post-Flashpoint DCU by the fact that Wally West is shown in his Rebirth Flash costume, and by the presence of Superboy.

But the most shocking part of the vision is that Highfather, Orion, and Lightray are present, but as they have appeared in recent Green Lantern titles, and not the classic Kirby versions that have been shown in Mister Miracle up to this point. It seems Scott is on the verge of waking from his false reality into the real DCU.

It’s also interesting to note that the Jack Knight version of Starman is also shown – yet another hint that James Robinson’s Starman series is canon. Similarly, we also see another hero returning to canon – Streaky the Supercat! 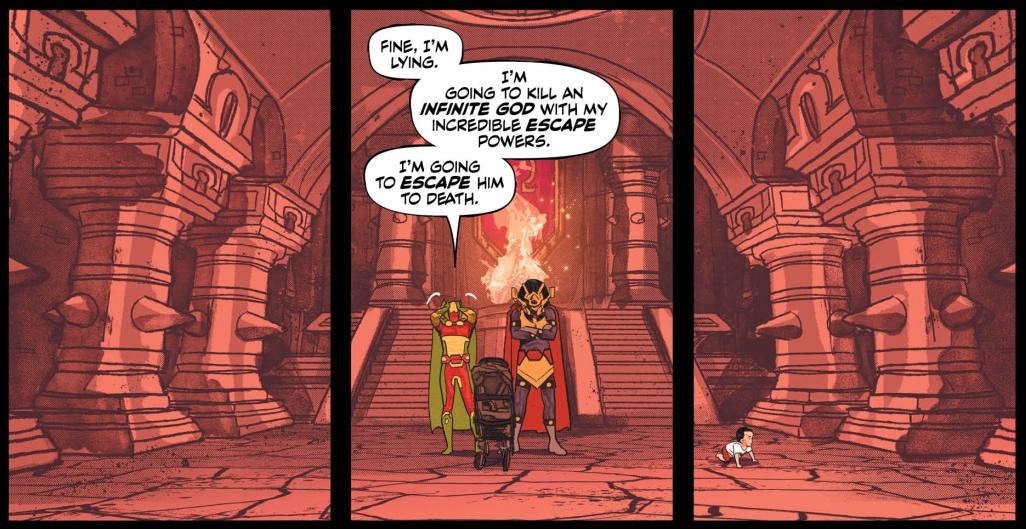 This ending seems to confirm my theory that Scott has been trapped in a virtual world which he would escape from at the end of the series to find himself in the Rebirth era DCU. Unfortunately, it also seems to negate my hopes that this series was retconning the New 52 version of the New Gods back to how Kirby first depicted them. I much prefer Kirby’s classic take to the modern version. However, this doesn’t detract from the quality of the story, and perhaps King didn’t have the option to reset the Fourth World characters.

This series has been one hell of a ride so far, and next issue will likely prove to be heart-wrenching, because if my interpretation is correct, Scott will need to face the fact that Jacob isn’t real before he can truly escape the false life he’s trapped in. I find myself both eagerly anticipating and dreading the final issue.