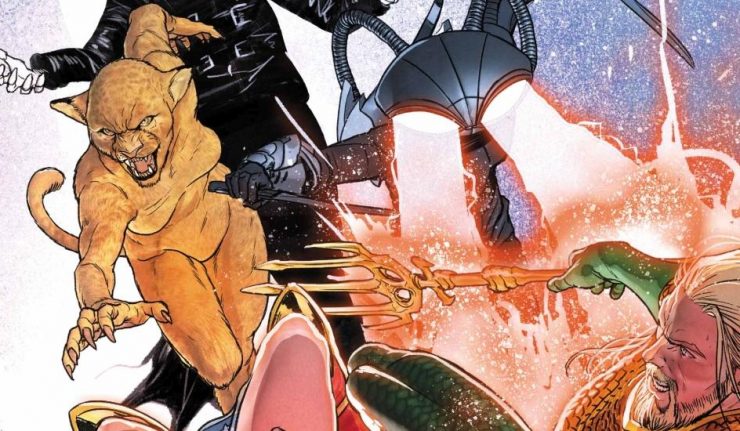 Part two of the “Legion of Doom” storyline focuses on Lex Luthor’s recruiting efforts—and this time around, he’s targeting both Cheetah and Black Manta for membership! Lex knows just what buttons to push to acquire his super-powered muscle, and this issue it’s all about getting revenge on Wonder Woman and Aquaman, respectively. We bet they sign right up as soon as they find out Lex has METAL’s Batman Who Laughs locked up in Doom HQ!

James Tynion IV is once again doing the writing this issue. With him and Snyder passing the writing duties back and forth, it seems that both are working close together in plotting the course for the central Justice League title.

With the League having gotten possession of the Totality, Lex Luthor turns to a surprising source for advice – The Batman Who Laughs. The idea of an evil Batman is daunting enough, but this is Batman with the malevolence and insanity of the Joker. It is very telling that even the Joker himself seems disquieted by The Batman Who Laughs.

This dark Batman reveals that the Source Wall was meant to keep a powerful being locked away from the DC Universe. This being is called Perpetua, and she apparently once wielded the seven forces that the Legion of Doom is attempting to master.

While this is going on, Black Manta and Cheetah attempt to kill the god Poseidon. Cheetah speaks of uncovering the secrets Poseidon has kept hidden beneath his waters, to which the god replies, “You fools will drown the Earth” – clearly presaging the upcoming Drowned Earth crossover event.

Not to diminish Snyder’s writing, but having Tynion writing some of the issues is proving to be a real benefit of the storyline. Snyder is doing a great job of setting up a storyline that juggles multiple cosmic concepts, but Tynion’s issues do a better job of helping the reader regain their footing and figure out what’s going on. Both are great writers, and their writing styles are working well to keep the story on track.

I like the inclusion of the Will Payton version of Starman, as I quite enjoyed his series, which started in 1988. Interestingly, this story places Starman’s origin in that year, which raises a number of questions about the timeline. We have seen elsewhere that the events of James Robinson’s Starman series featuring Jack Knight is in canon. But Will Payton’s sister is Jack Knight’s girlfriend. So, how exactly do the timelines of the two series match up?

Although I like the use of this version of Starman, I fear that these retcons are messing up the continuity of Robinson’s series, which is a masterpiece that I hope isn’t being unraveled by these changes. On the other hand, I suspect the story is leading towards some major continuity changes to the continuity which might make the matter moot.

This title is absolutely living up to its potential. This is the most exciting the League’s adventures have been since Morrison’s JLA.