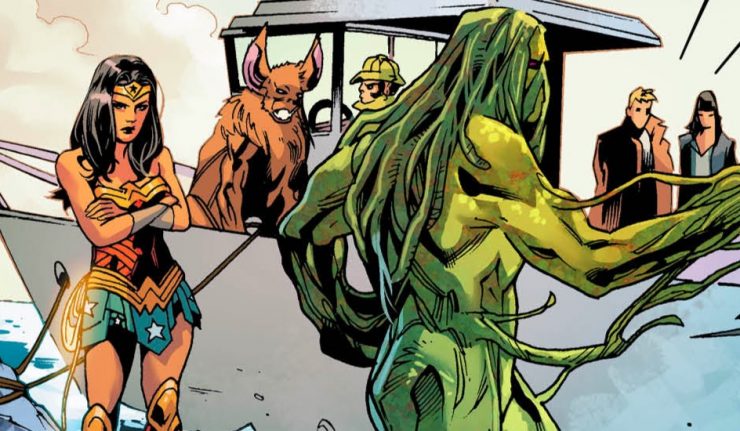 “The Witching Hour” part two! The Justice League Dark barely escaped their first encounter with Hecate, but they know she’ll be coming back for the power inside Wonder Woman. But what if Diana could tap into that power herself to take on Hecate directly?

Yasmine Putri’s cover is excellent. On its own, it is just a gorgeous portrait of Wonder Woman with a darker style. But it also plays into the story well; the cover sells the issue both in tone and plot.

Anytime Emanuela Lupacchino and Ray McCarthy are on a Wonder Woman issue, I am immediately more excited. They’re one of the best teams in the business and their work is even better with Romulo Fajardo Jr.’s colors. I love this art so much. The characters look great and the backgrounds are gorgeous. I love that even though this is a darker story, the art is still very colorful and vibrant. The story is dealing with the mystical side of the DC universe and the art showcases it in a really appealing way; this shows what we lose if Hecate wins.

Justice League Dark reviewer Ari Bard and I collaborated on this review. He particularly liked the introduction of Deadman and Manitou Dawn in the story. It felt like an homage to Joe Kelly’s JLA and Ari appreciated that.

I love the idea of Wonder Woman wanting to channel Hecate’s power against her. Power doesn’t make one good or bad; it’s what the person with power chooses to do with it. Diana is cursed with this but if she can use it to do good, she will. And if anyone can handle it, it is Wonder Woman. But it’s also more complicated than that. Magic has a price in the DC universe which sets us up for an even more interesting story.

Ari and I both feel that the issue relies too heavily on narration. I usually tend to not like narration anyway but it is very unnecessary here. Everything the narration says is something I already know from the art, dialogue or character’s actions. It makes the issue a little more tedious; it’s over written and explaining things that don’t need to be explained.

Constantine feels strange in this. His dialogue is entirely too on the nose. I understand why he wants to help and how that ties in with his history. That works and is effective but the issue over explains itself. And Constantine is not the guy that makes big heroic speeches. His dialogue felt so off especially when he’s talking to Zatanna on the boat. Additionally, Diana and Zatanna have a big argument about the price of magic and Constantine just sits there. He knows more about magic’s consequences than anyone; I think he should have been more present in that scene.

This is a fun issue. I love the world building; the issue manages a balance between fun and serious. The stakes are real and they are showcased in Manitou Dawn; this threat is intense. But the issue knows that this is kind of bonkers and is able to create a lot of energy and excitement. The art is gorgeous. While Ari and I both have small quibbles, this is a great story that is worth reading.