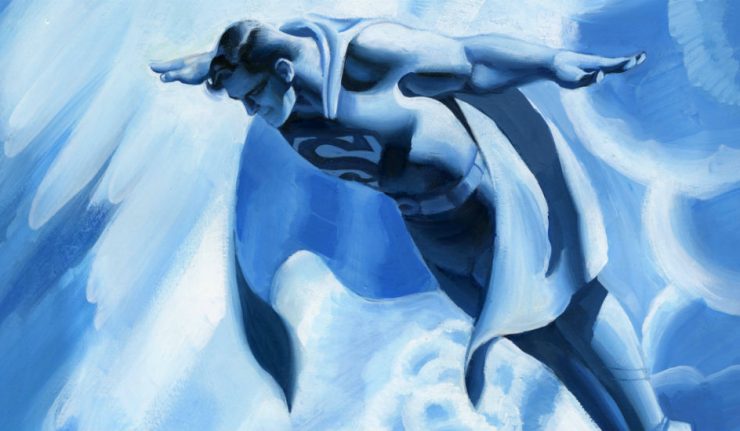 Here’s the best way to enjoy your copy of Action Comics #1004!  1.  Buy the copy with the metallic cover by Steve Rude.  2.  Open the comic up to the center spread.  3.  Remove the staples.  4.  Carefully remove the cover, frame it, hang it on your wall and enjoy it for the rest of your life!  5.  Replace the staples.  6.  Take the remaining interior to the nearest convention where Bendis is appearing and see if he will give you your $3 back.  (Rude’s cover is worth that other dollar.)

Perry is talking to Clark at the Planet about the Red Cloud story and trying to get him to make it the “Red Tornado” instead.  Perry is a bit pushy and a little annoying in his desire to have Clark change this element.  Clark and Robinson have a brief moment where Clark suggests a collaboration on the story before he’s called into Perry office to be assaulted by Trish Q’s image of Lex Luthor at Lois Lane’s hotel room with a suggestion of infidelity in the caption.

We then learn what happened the previous night – Clark flew to Chicago to confront Lois.  The bulk of the issue is a bizarre sequence of conversations in which Lois attempts to evade answering Clark’s main question: “Why didn’t you come home?”  Her response is a manically delivered monologue about how she’s over being a mom and wife and needs to write.  But, she never explains why she couldn’t just tell Clark why.  Lois manages to intersperse her explanation with sex.  She seems quite out of character, not only in leaving Jon in space with nut-job Jor-El, but her lack of empathy for Clark’s feelings.  She never answers his question fully and her actions are immature and selfish.  The issue ends with them together, but leaving the reader feeling as if all the love has been stripped from the relationship.

Though monochromatic, Steve Rude’s cover really is beautiful and the art by Sook and Von Grawbadger is nice.  Their staging of the reunion is well done, but feels strangely incongruous with the content of the story.  Although, the fact that Lois tries not to look Clark in the eye when they are talking on the street lends to the notion that something is no right.

We’re going to be here for a while…

Once again the plot moves infinitesimally and this wouldn’t be so bad if Lois and Clark’s reunion was emotionally moving and joyous.  However, it is neither.  There is not one ounce of joy or hope and is quite depressing.  We have a Clark who is clearly hurting and wants to know why Lois has returned without Jon and why she hasn’t returned to their home.  At no point does Lois seem like herself.  She never gives Clark a straightforward answer to his question, it always feels like she’s hiding something.

Lois feels out of character throughout the issue.  Lois has never seemed like the type of mother that would leave her son in space alone with nut-job Jor-El.  She even acknowledges that he’s not right in the issue.  She tries to convince Clark that he doesn’t need her, he just “wants” her.  What does that even mean?  To me if feels like Lois doesn’t feel any love in their relationship.  Clark reaffirms that he needs her and it oddly leads to sex.  She’s just invalidated his feelings and then they jump in the bed?

Lois continues her explanation stating that since their life is not normal on any level implying because he’s Superman and they have a super-son, why should they try to have any normalcy in their life at all.  She thinks that because they have important work to do they shouldn’t try to be normal.  It seems to be that she wants to live and write in Chicago while he lives in Metropolis and carries on as Superman.  While Lois seems to be down for all the sexual liaisons there’s seemingly nothing more between them.  Despite saying, “we’re not breaking up,” she just seems to be pushing him away.  None of this really seems in character with the way we’ve seen Lois portrayed as a wife and mother so far.  Jon’s 10, why would she feel safe with him in Jor-El’s care, a man she knows is not right in the head.  Lois’s delivery and speech affectations, calling Clark, “baby” every time she addresses him sounds like Bendis doesn’t know how Lois speaks.

Clark is surprisingly passionless in his retorts to Lois.  While at first he presses her for more of an explanation, too quickly he seems to accept what’s going on, perhaps so he doesn’t lose her entirely.  Clark seems like a man emotionally beaten and he’s holding on tightly to Lois for as long as he can despite feeling that it’s over for her.

To see how wrong this situation is, switch the genders and look at the same story…Superman goes into space leaving Jon and Lois at home.  They don’t hear from him for months?  However, he’s actually returned and been staying at the Hall of Justice doing super-saves on the DL to stay under the radar because it’s too much being a father and husband AND being Superman.  Finally, he has to reveal his return in order to save the world, and there’s Lois covering the story….  Does this sound like the actions of a mature, responsible adult? So, Superman, why didn’t you come home?  Et tu, Lois?

This is the redefining moment for Lois and Clark’s relationship and it’s flat out terrible.  Bendis seems to have written an excuse in order to claim that technically, Lois and Clark are not broken up. But, how can this be true when they are living in different cities and Lois doesn’t seem to want any type of life together?  Nothing really seems right about it, from Lois’s immature and selfish actions, to Superman’s willingness to accept what she says when she does nothing but hurt him emotionally from start to finish.  What happened to their love?