Neil Gaiman created an expansive and cherished universe as he created The Sandman. A vision of a dark world where all magic emanates from in the DC Universe. Two writers at two different times had the task of expanding that universe. At the Movies Comics and Manga Expo – now lovingly called MCM Comic Con, those writers sat at a panel and discussed everything from their entry into comics and their ambitions for the projects.

Enter the Infinite – How they got started in Comics

Mike Carey: Comics were always a huge part of my life. I grew up reading comics; I read comics before I read books. I actually learned to read from comics. I moved on to American comics, then I reached a point in my life where what I did to earn a living was teaching. But alongside that, I was doing a lot of comics journalism. I was doing reviews and articles about comics for fan-zines – free magazines. From that I started pitching series ideas to British indie presses, then I started doing the same thing in The States. Then I actually got my foot in the door with DC with the Lucifer mini-series. It was my first ever DC work. I was a big fan of Sandman. Neil Gaiman had completely redefined what you could do in a serial book, so getting a chance to play in that sand box was incredible.

Moderator: Do you have anything to do with the new comics coming out currently?

MC: No, not at all. Nothing to do with the Lucifer tv series either.

Mod: Dan, when was the first time you heard that you’re gonna be involved in Sandman?

Dan Watters: The first time I heard, I was chatting to a Vertigo editor on the phone. It was before I heard they were doing other Sandman stuff, and he asked: “would you be interested in doing a new Lucifer thing?” And I said: “um. Yes. Yes I would like to write stories about the devil and have you pay me for them.”

Mod: Can you tell us a bit about how you got into comics?

DW: What was that thing Alan Moore said? When you’re a kid in Britain, you don’t get comics, you just sort of have them, like rickets. It’s quite a common story among comics creators and fans, that you sort of fall out of them in your early teens, then you find the more mature stuff. For me those were definitely Sandman and Lucifer.

Mod: Was it intimidating to start writing Sandman and  Lucifer?

DW: Yeah, this my first big gig. And this character has so much lineage through Sandman, and Mike’s run, and the tv show, there’s two very different versions of the character, I actually found that quite freeing, because I ask what’s the through threads of him? What makes these things recognizably Lucifer? And what could I do that’s a separate version that still retains all of these?

It’s clear both writers know the wider work very well. Writing around something established allows a creator to come up with the new while upholding respect and integrity for what came before. Waters and Carey do that very well.

MC: I do have a religious background, but it’s a rather torturous and strained one. I grew up in Liverpool. My father was a lapsed catholic and my mother is an anglican protestant and at the time, probably not anymore, Liverpool was one of the most sectarian cities in the UK. There were a lot of catholic and protestant enclaves in Liverpool, and a lot of tension. So I grew up hearing and loving religious stories but no emotional commitment to religion at all; I’m still a convinced atheist. So when it came to writing Lucifer I was much more influenced by William Blake, by The Marriage of Heaven and Hell, than anything in the bible. I brought a lot of that and a lot of my hangups about family into the comic.

DW: It’s weirdly similar. My dad’s a Belfast catholic, and my mom’s a Bangor protestant. I was born here so it was less involved in my direct childhood. But I was sent to an extremely catholic secondary which had mass in the middle of the day. I’ve also been reading William Blake in a big way. I guess I can say the third issue of our run is called The Annulment of Heaven and Hell.

It’s deeply rewarding to see creators who have had very little interaction otherwise be on exactly the same page on where they get their inspiration. Even their origins being of a really similar place adds to the strength their work gives out. Both writers agree that they love that Lucifer is only a “liar by omission”. 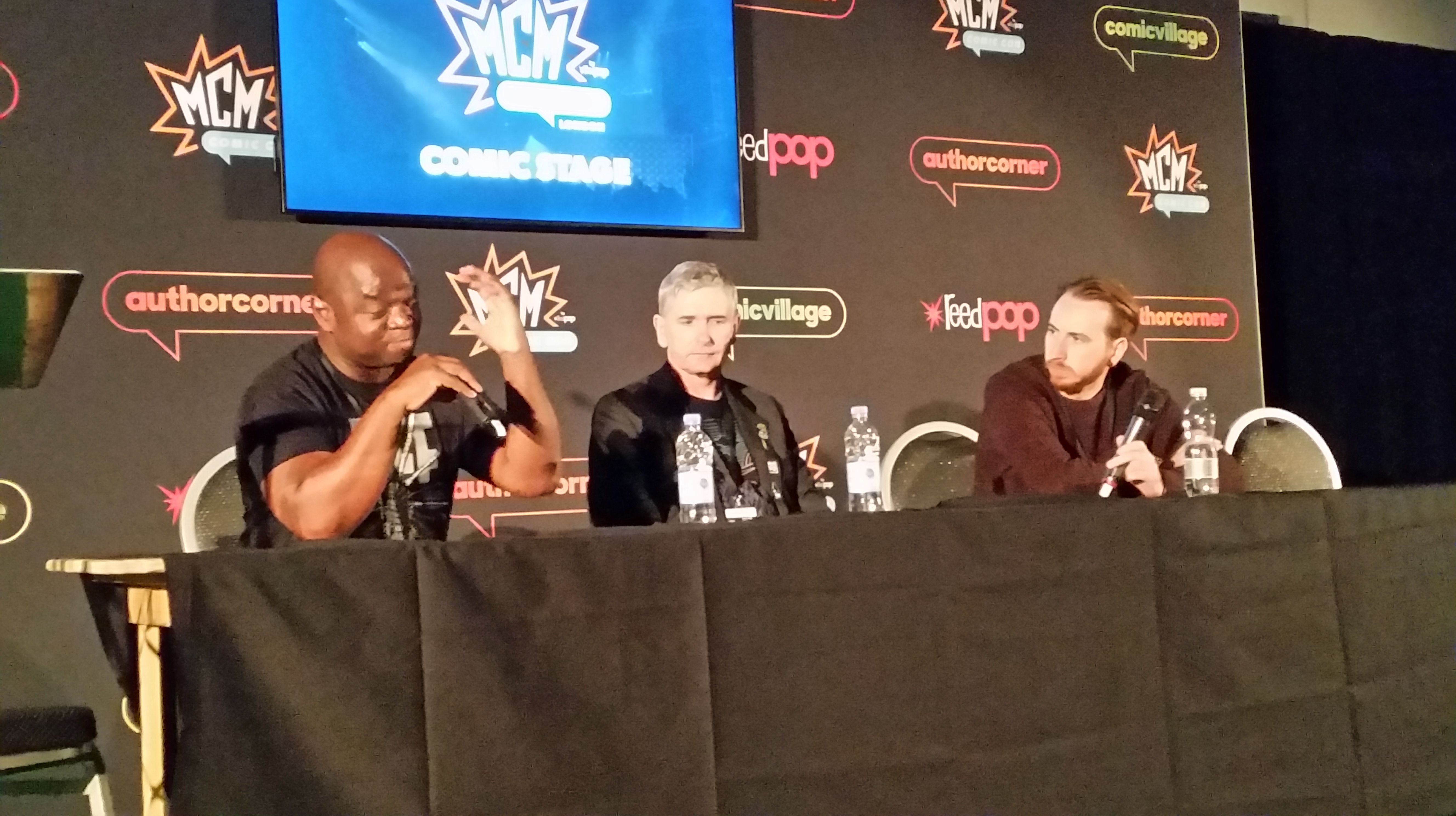 Limits of Solidarity – The Writers on Lucifer’s Hard Rules

MC: One of the problems I faced early on [while writing Lucifer] is that he’s nearly omnipotent, you have to find problems where the solution doesn’t rest in him saying: ‘let this be so’. I imagine Dan solved this differently because he had Lucifer start in a radically different starting position. What I did is I often use him as a catalyst for the events of other characters. His actions are almost never the key to what makes the story work.

DW: I’m definitely doing a similar thing to that extent. It’s about how he affects humanity. We’re also going backwards a lot, to see all the points in history he stuck his oar in. That’s also one of the hard rules of Lucifer, he doesn’t do anything to be evil. He actually has motives and reasons to do what he does.

MC: I’d love to do a Rose Walker story, but Neil [Gaiman] wouldn’t let me. I pitched one to Neil and he said ‘if I ever came back to Sandman, that’s the story he would tell. Please leave her alone in the meantime.’ We, me and Peter Gross, would like to go back and do a Mazikeen series. We pitched a story for a four part mini series where Mazikeen becomes the leader of the Lilin and she leads the Lilin out of hell, but no one in DC was interested.

Dan Watters’ run on Lucifer has only just begun while Mike Carey, to some extent, brought the character into what the character is today. It’s uplifting to know that Neil Gaiman’s vision has been handled by two greats.