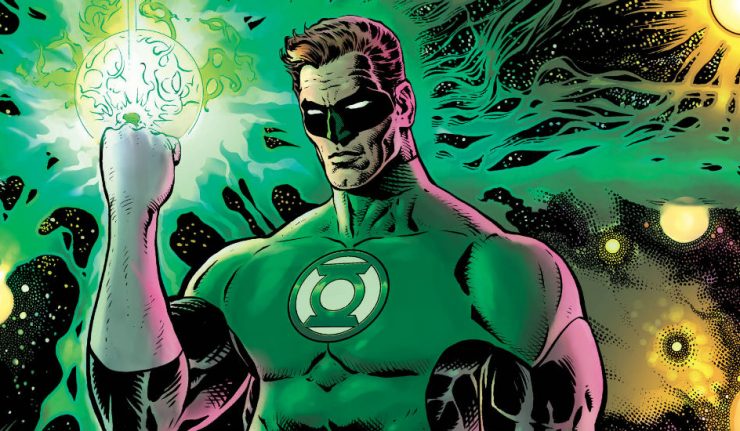 This first issue opens with the introduction of a couple new Lanterns on a mission.  The pair chase down some pirates and while seemingly successful at first, one of them doesn’t make it.  The virus Lantern lives to fight again.This leads to another Lantern having his ship hijacked by some escapees with the help of a Luck Dial.

On Earth, Hal is looking up at the sky as he ponders his inadequacies.  He’s bouncing from job to job and his current lady friend, Eve, tries to remind of what he was and the potential he has.  Hal indicates somewhat evasively that his “other job” is always more important.  After a moment of passion with Eve, Hal leaves and stumbles across some aliens.  After subduing them, he comes across a crashed ship and another Lantern inside.  Explaining that his power battery has been taken he has no way to charge his ring and the crashed Lantern lets Hal borrow his allowing Hal to go after the other escaped alien.

In classic fashion, Hal subdues the alien and ends up getting called to New Oa for an audience with the Guardians of the Universe.  The Guardians are rather boastful about the diversity in the Green Lantern Corps which now encompasses creatures of different spectrum and wavelength.  They not only give Hal a mission to investigate the problems with the Book of Oa, but reinforce their belief that they are the law!

The virus Lantern is an interesting character concept, one that feels unique and different.  Hopefully, Morrison will explore this character in future issues.  Despite dying in the first issue, Morrison does a good job of giving the 13th Earl of Everglow a backstory that adds depth to this new yet disposable character.

Liam Sharp does a nice job throughout depicting both alien and familiar scenes.  The similarities to Hal’s origin in finding the crashed spacecraft are not lost on the reader or Hal himself.  It’s worthy of a smile and indicates that the reader doesn’t really need to know anything coming in to this series.

Utilizing Hal’s experience and knowledge of aliens as the element that allows him to take down the escapees from the crashed ship is clever and enjoyable and a nice character moment for Hal.

While Morrison has no obligation to pick up right where Robert Venditti left off with Hal Jordan and the Green Lantern Corps #50, this premier issue feels disjointed from previous series.  Fans of Venditti’s run will find it hard to leave that baggage at the door when opening to page 1 of The Green Lantern.

While it’s always possible that Morrison will fill in the blanks, there are a few things worthy of head scratching…Where did New Oa come from? Didn’t Hal no longer need to charge his ring since the power for his self-generated ring come from within? Why the change in the Guardians’ attitude?  The Guardians had seemed to grow and learn from past misdeeds, yet now again believe to find themselves infallible.  What happened to Hal and Carol?  After that emotional reunion at the end of Hal Jordan and the Green Lantern Corps #50, it’s strange to see Hal regressed emotionally without an explanation.  Despite knowing that Hal has the potential to ruin a relationship at the drop of a hat, it’s important to see how it happens.

This issue is a bit of a mixed bag.  While there’s certainly a lot of interesting new Lanterns introduced and a serious threat at hand, the characterization of Hal is a little contrived.  At the end of Robert Venditti’s run on Hal Jordan and the Green Lantern Corps, Hal and Carol seemed like they had come to an important moment in their relationship that would be ripe for exploration.  Venditti’s run was so strong on character, moving away from that moment without a mention is a bit jarring.  Hal’s characterization has reverted back to an iconic, yet unenlightened portrayal.  This issue is probably more enjoyable read cold without the knowledge of what’s come just before in Hal Jordan and the Green Lantern Corps.