While Iris is rocked by an accidental future fact unveiled by Nora, Team Flash has to deal with a psychopathic metahuman called Rag Doll, and Caitlin learns new details about her father.

This week was a well-balanced examination of the family dynamic and all three subplots pinpointed them with excellent acting and pacing. That and also a very dynamic interpretation of yet another classic DC villain. 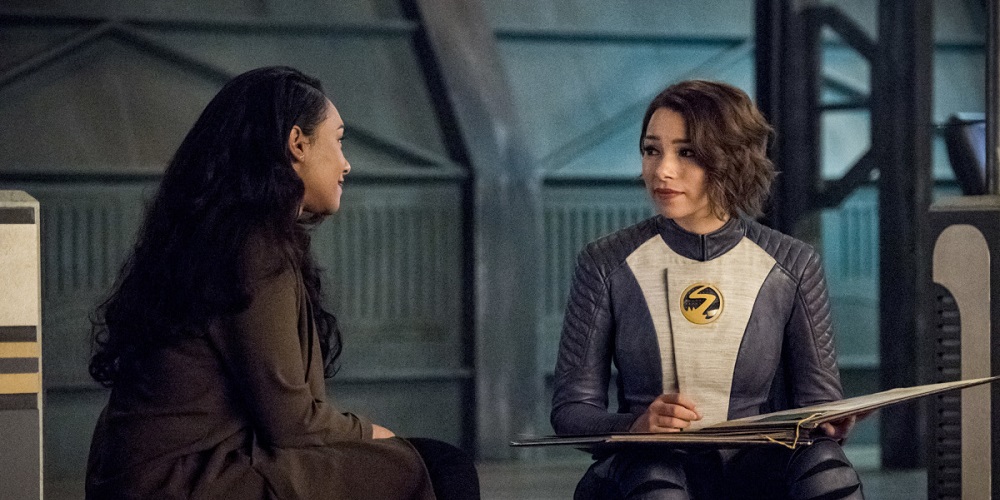 We’ll first focus on the West-Allen dilemma stemming from last week. Candice brings her A-game for the fifth week in a row thanks to good writing and brilliant performances. What works in this episode is it is a very Iris-centric chapter. The writers go to great lengths to flesh out Barry’s better half in a way that hasn’t been done before. Iris does it all in this episode: The investigation of Rag Doll, working alongside Barry in evidence analysis, hitting the dance floor with her husband, and even diving off a building after him when Rag Doll pushes him off. It’s bringing out Iris’s best that makes up for last season’s muck up of her character that makes both audiences and her own daughter cheer. Even when off camera, Cecile is engaging Nora with stories about Iris’s childhood, driving home the notion that she’s always wanted to be a reporter. By doing that, it also drives home Season One’s Barry motive behind encouraging Iris to pursue journalism. Drawing upon the season two subplot involving her mother was key in bringing everything into focus: Iris kept away from Francine until near death, and now she feels like history repeating itself with Nora. She sees it as a karma-based cycle that is only reinforced by Peter Merkel’s horrible mother’s disownment of her son. Her daughter feels betrayed by a version of her mother while ignoring the person she is now. Nora grew up with an Iris who had lost her husband and seemingly shut down; that being the case, she is denying herself the opportunity to really get to know the fleshed-out version of her mom. She’s rightfully told off when that boundary she’s enforcing almost costs someone their lives early on. Again, a Barry-esque move he pulled in Season One and Two when he was angry. Kennedy and Patton have great chemistry when they are fighting as much as when they finally bond. After four episodes of Nora keeping away from Iris like the plague, it’s worth it to see them finally connect like family; you’re there with Grant in that satisfied smile.

Speaking of, the role reversal worked thanks to the implementation of the meta-cuffs; it reminds the audience that, while a hero, The Flash is also a metahuman and can be contained by the same means. The aerial rescue by Iris also was also another callback to the season 2 suicide dive Barry saved Iris from. Lastly, the stigma of the hero, in civillian guise, being saved from certain death only to slip away to suit up and beat the bad guy is refreshingly avoided. This makes it Elongated Man’s victory and protects Barry’s identity from Rag Doll. More brilliance on the part of the writers this week.

Now we examine the mystery of Thomas Snow, which only deepens for Caitlin, Ralph, Sherloque, and Cisco. It’s during the course of this investigation that a parallel is recognized between Caitlin’s dilemma and Cisco’s issues with his powers since being injured by Cicada’s dagger. Both best friends have been affected by recent trauma that calls into question their very sense of selves. Danielle’s performance is warm and heartfelt during her scenes with Carlos over who Cisco is without Vibe. Her appreciation of Cisco’s efforts to help his friend in spite of his own injuries is genuine and you momentarily feel a spark developing. Since their first appearance on Arrow, these two have been thick as thieves and helping to keep each other on their feet. Cisco did that for Caitlin last year, and now it’s her turn after Cisco has lost both his girlfriend and now his superhero identity. Seeing Caitlin employ her brilliance in the area of puzzle solving is fascinating, especially when it leads to possible inspiration for the creation of Killer Frost. What also works this week is the understandable reluctance Caitlin feels when they are close to solving this mystery. Her father went to so much trouble to fake his death and leave Cait a trail that only she could follow. He even knew Professor Stein, and she cannot even go to Stein to confirm it. The more she learns, the more fearful the question of why becomes. It’s a natural, human response to be afraid of how deep this rabbit hole goes after being so emotionally invested. She’s afraid of being terrified or disappointed by what she finds. The writers even reaffirm the inventive creativity of Cisco Ramon by his recycling DeVoe’s remaining satellites as S.T.A.R. Lab’s new eye in the sky times three. What is also different this year is that rather than bonding with Cisco, this Wells has more mutual interests with fellow sleuth Ralph Dibny aka “Giraffe.” After four years of Harrison, Harry, H.R., and the Council of Wells, the go-to is given a break and allows Tom to play off Hartley’s character as collaborating detectives as opposed to lab partners. 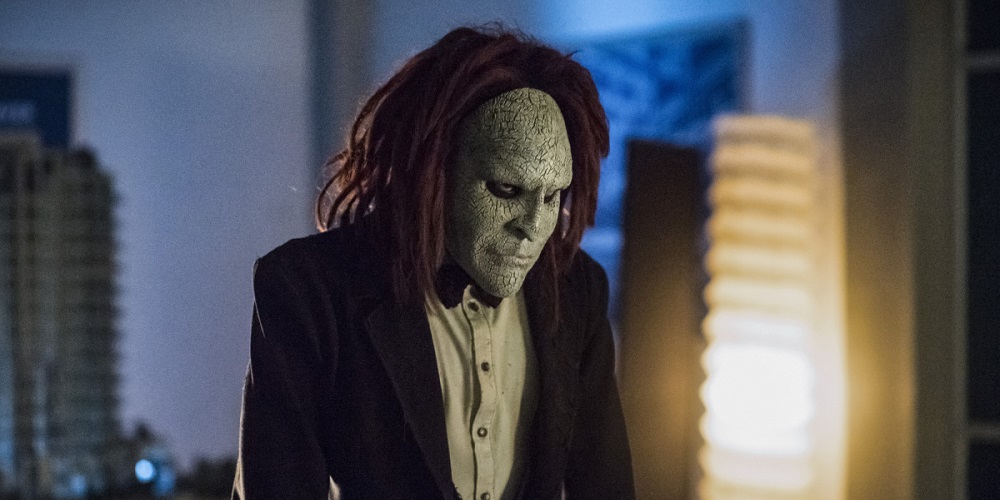 And now we come to the villain of the week and how family plays a role in his backstory. Portrayed by actual contortionist Troy James, and voiced by DCAU alum Phil Lamaar, Peter Merkel aka Rag Doll is definitively creepy. There are parts during the contortion scenes – aside from when he’s pounding his fingers flat enough to fit through the seams of a jewellery box or his face folding through a vent– where the CGI ends and Troy begins. The cracked texture of his mask, and his being disowned by his family for his career as a thief, easily conveys the sense that he is emotionally and literally broken. Lamaar does for Rag Doll with Tony Curtis did for voicing Zoom; the craggy tone Phil uses gets across that Merkel is in perpetual agony with every movement conveyed by James’ amazing flexibility. What also works is that you never see Peter’s face aside from his eyes; the Michael Meyers effect perfectly pushes forth the notion that his identity has been lost to this creature he has become after being infected by the S.T.A.R. Labs Satellite explosion. Further, that fractured psyche fuels his motivation of spreading that sense of loss and pain to others by taking what matters most to them. Whatever the dark matter did to twist him into Rag Doll, the monster was already there waiting to get out. Very loosely, he is an extreme version of Nora, cut off from his family and lost to his demons. I would very much like to see more of Rag Doll in the future, especially since his very nature makes a jail break extremely possible. He’s the perfect counterpoint to Elongated Man’s abilities, and a possible future nemesis given Ralph was who defeated him (NOTE: I DON’T WANT TO KNOW HOW YOU MANAGED TO SPIT HIM OUT, DIBNY).

Location. For faithful followers of the Arrowverse, there is always the possibility of seeing a set and saying to yourself “Hey! I know where that’s from!” The chosen location for the Merkel Fundraiser was recycled from the Season Two Suicide Squad episode of Arrow. Vancouver is a large enough city and therefore more than enough uncovered locations to acquire for filming. The last thing the Arrowverse needs is for reusing old sets without disguising it like geographic musical chairs or the subject of drinking games.

The end of the West-Allen drama and the showcasing of a Canadian talent in the form of Rag Doll was a worthwhile episode to watch. Candice Patton’s character was fleshed out and brought full circle in this episode in a way that didn’t feel forced. As we close in on Thomas Snow, could we see the inevitable return of Caitlin’s chiller half, Killer Frost? As the trailer reveals, this version could be tied to another classic DC villain. But for now, I like the direction the story is going for all facets of Team Flash and Joe’s presence is always missed. Get well soon, Jesse; while Danielle had some good scenes, and without ragging on her like an additional negative, Papa Joe should have told those stories.