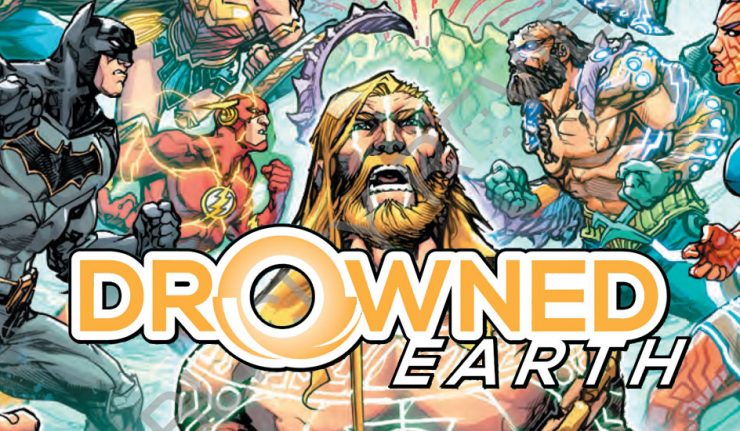 “DROWNED EARTH” part three! It’s Batman, in a full-body cast, versus the Legion of Doom! Get a ringside seat for the craziest fight in comics as a bedridden Batman battles The Joker, Lex Luthor, Gorilla Grodd and Sinestro! Meanwhile, Aquaman locks tridents with Poseidon and Mera discovers an ancient secret that could change the fate of Atlantis—and the entire Earth—forever!

In this issue, a crippled Batman faces several members of the Legion of Doom alone and shows that he deserves his reputation as a badass. To compensate for his damaged limbs, Batman dons one of Luthor’s old battlesuits to keep the Legion from stealing the Totality from the Hall of Justice. Unfortunately, despite proving a match for Luthor’s team, they manage to delay him enough for Luthor to steal the powerful artifact.

Batman is often portrayed as having no sense of humour, but Tynion shows us that Batman is fully capable of bantering in the midst of battle when he’s in the mood. One example, is when he offers the Joker a tour of the Hall of Justice, starting with “the part of the Hall where Batman kicked the asses of the Legion of Doom.”

We also learn that the Greek sea-god Poseidon has been keeping a secret about the alien gods. They actually had come to Earth in peace, but Poseidon tricked Arion into casting them into the Graveyard of Gods for thousands of years.

Although this is shocking, it fits in with the nature of the gods as shown in Graeco-Roman mythology. The gods were not above base human motivations such as greed, anger, or jealousy. So, it is quite reasonable that Poseidon might have been suspicious of these alien gods and dealt with them deceitfully.

Now regretful, Poseidon bequeaths the last of his power to Aquaman so that he can face Black Manta and the alien gods. I find this intriguing. What abilities will this power give Arthur? And how much more powerful will he have when he recovers his own power from Manta? And does this make Aquaman Poseidon’s successor as the god of the sea like Wonder Woman was the goddess of war in the New 52 continuity?

The Earth being flooded is a disaster on such a colossal scale that it makes me wonder how the world can ever be the same afterwards. I can accept that the floodwaters will abate, and that all the mutated people will return to normal, but the flood should have destroyed buildings, houses, and bridges. And there would be hardly any mechanical or electronic devices left in working order.

A disaster like this should leave the world devastated for years to come. However, it is most likely that the Earth will be magically restored with little or no lasting effects of the flood, which would strain believability a fair bit. It’s not that I want to see the DCU Earth to be a post-apocalyptic hellscape from now on, but it would be nice if there was some visible effect on the world afterwards.

It’s possible that Snyder and Tynion have a believable reason for the world to get back to its previous status quo after the Drowned Earth wraps up, but it’s hard to see how. We will have to wait to see what they have planned. It could be that I’m overthinking the matter entirely.

Whatever lasting effect the Drowned Earth saga has, you can’t deny that it’s an exciting tale of epic proportions. I have no doubt that the League will prevail over the alien sea gods, but the Totality in the control of the Legion of Doom is a much greater threat that doesn’t portend well for the League.