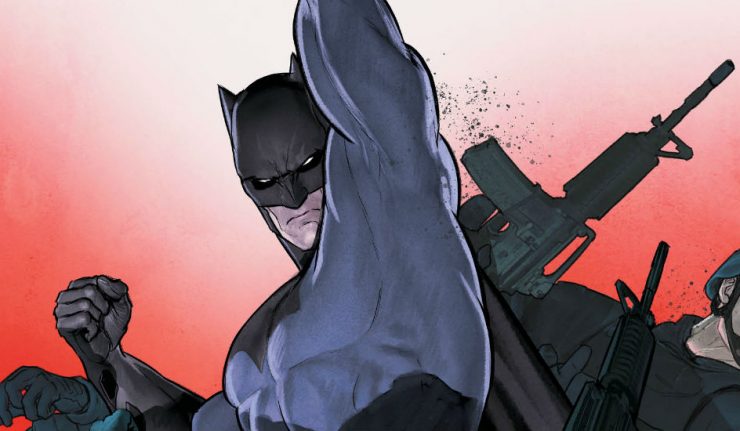 After a meeting with the Penguin, Batman makes his way to Arkham Asylum, ready to confront Bane once and for all! Expecting to put an end to the madness Bane has caused from inside its very walls, Batman finds himself facing surprising opposition–the Gotham City police force! At what lengths will Batman go to pursue justice? Especially if the criminal is already in custody?

Thanks to the confessions of the Penguin to Batman, everything comes together perfectly in this issue. Every event Batman has been through, from both as Bruce Wayne and Batman has been orchestrated perfectly by Bane. The most recent tragedy–the shooting of Nightwing made Batman travel halfway across the Earth to bring KGBeast to heel. Leaving the villain in the snow broken, Batman made his trek back to Gotham ready to confront Penguin–the middle man. Penguin having been betrayed by Bane himself recently, confides in Batman the truth about everything that’s occurred in that last few issues, leaving Batman angry and full of vengeance. Batman makes his way to Arkham Asylum, and as guards threaten to fight him–he calmly threatens them to back down, and they actually do it! From here Batman makes his way to Bane’s cell and proceeds to beat him down repeatedly while telling him he’s knows the truth. It’s only with the intervention of Gordon that Batman stops, but things go from bad to worse.

I have no negatives at all about this issue. For a long time Batman has enjoyed a great cooperation with the police force in Gotham but in this issue I really think he’ll lose it. His relationship with Gordon gets pushed to the limit in this book, and honestly if Gordon ends their partnership I really wouldn’t blame him. Bane is obviously placing Batman on an island alone from his allies before he breaks him and Jim Gordon is another piece that’s just been removed. Then there’s also the possibility of the police force now seeing Batman as a threat and no longer as a silent partner as he’s always been. Batman crossed lines in this issue and it was all part of Bane’s plan. Even as Gordon and Batman argue Bane is laying on the floor bleeding playing the part of invalid patient extremely well. Batman is seen leaving Arkham and he’s obviously losing his edge trying to get to the truth.

Overall this issue was a great read. The dialogue between Batman and Penguin was intense and I enjoyed seeing Penguin’s emotional side as well while he confides in the Dark Knight about his personal life. Penguin knows that Bane will kill him for his betrayal, and he still doesn’t care. Batman on the other hand seems to be getting more paranoid instead of more aware. Once he confronts Bane and sees his child like state, Batman still proceeds to beat him almost senseless, and then he crosses the line by accidentally hitting Gordon! I really hope their friendship and partnership is saved but I doubt it. Bane’s plan is working too perfectly for it to be otherwise. I’m definitely looking forward to seeing what’s coming next in the Dark Knight’s struggle!