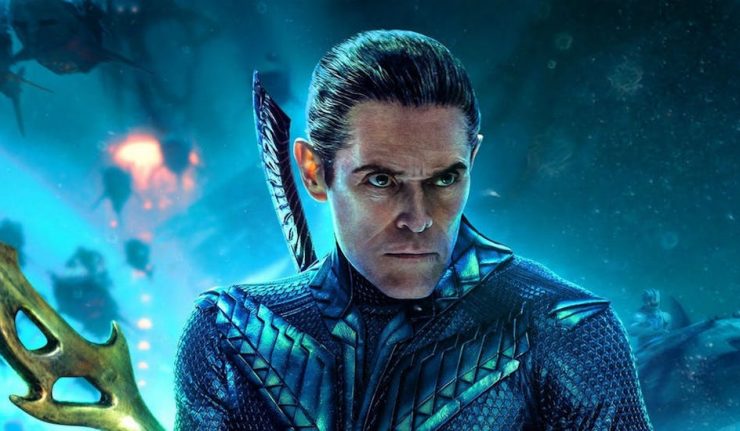 Willem Dafoe is no stranger to the superhero film genre after tackling the Green Goblin in Sam Raimi’s original Spider-Man and was one of the finalists to be cast as the Joker in Tim Burton’s Batman, which finally was taken by Jack Nicholson, and the rest is history.

Now Dafoe is back as Nuidis Vulko in the upcoming Aquaman film.  During an Aquaman press junket, Dafoe opened up about his involvement with James Wan’s Aquaman and what stood out to him most about taking on the role of Arthur Curry’s guardian and guiding light throughout Arthur’s life.

“James, I loved.  He was very enthusiastic.  He a huge draw for me coming to this project.  His movies are very precise.  You can really see a very sure director’s hand, so it was very curious to think that-certainly he worked on a big scale, but nothing this big, plus a fantasy film.  So, he was great.  He’s incredible, he’s got an incredible energy, he’s go an incredible film culture; he’s like a little kid, as far as his enthusiasm, and he’s rigorous enough that he can delegate well and get the overview.  But he’s always there.  With a film this big, when you have so much effects to set up and you have to do so much planning-you really need a general.”

Vulko is one of very few in Atlantis who has sworn his undying allegiance to Arthur Curry (Jason Momoa) , the son of Queen Atlanna (Nicole Kidman) and the true heir to the throne, but has to pretend to be loyal to King Orm (Patrick Wilson) as war between the surface and subterranean worlds boil over.