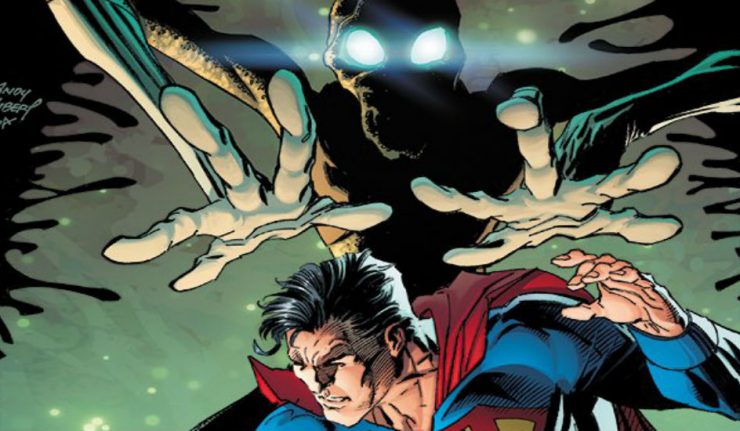 After his boxing match last month, we find Superman adrift in space, wounded and near death.  He is picked up by a passing alien vessel.  Their healer is called in to save Superman, but it is deemed to costly to the healer.  Instead of disposing of Superman’s body as instructed, he keeps it and takes it back home with him.

In his attempt to save the Man of Steel, the healer connects with the Kryptonian’s mind and is able to experience aspects of Superman’s life.  He sees his good deeds as well as the mission he’s currently on.  The healer decides that Superman’s presence in the universe is worth sacrificing himself.

Despite being unconscious for 11 of the 12 pages in this story, King is able to convey a lot about Superman’s character and what he means to others as well as the importance of a good person in the universe.  The alien healer completely understands what Superman means to others, and at the same time, Superman comes to mean something to him.  Seeing Superman’s life through his own eyes is a powerful way of learning about someone.

There’s a lot of emotion in this story.  One can’t help but feel for the healer’s wife and children.  And, at the end, Superman does, too.  The story raises a couple of deep questions: Is any one life more valuable than another?  And, what is it that moves an individual to sacrifice their own life for another, even a stranger’s?  While no answers are given, these moral dilemmas raise the quality of this story to another level.  It no longer simply addresses the content of Superman’s character, but the whole nature of goodness in the universe.  Because, the alien healer is every bit the hero that Superman is.  He uses his gifts to help others, and in this case he gives it all, and in his mind, for good of the entire universe.

The issue is rounded out with Superman/Batman #6, Green Lantern #6 and The Terrifics #6.

The only potential drawback in this issue is the unfamiliar format may not be enjoyable to some readers.  However, King is doing an excellent job in keeping each chapter a separate, memorable story that adds to the overall narrative.

This continues to be the best Superman comic published by DC and this may be the best chapter in King’s “Up in the Sky.”  It moves the story forward only slightly, but it adds a lot of character work and most importantly elevates the story through the themes of morality and goodness in a way that’s probably never been addressed in a Superman comic.