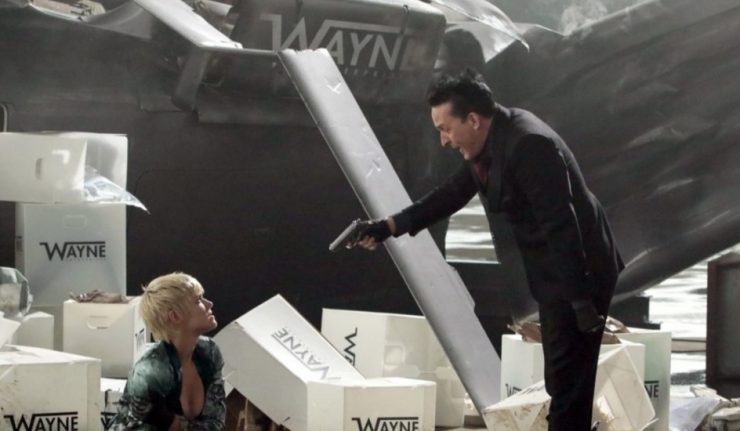 Jim Gordon and Bruce Wayne face the chaos Gotham City has become, as villains who survived the attack on the city begin to resurface and claim various territories; Selina Kyle grapples with how to deal with her uncertain future.

No Man’s Land is a terrific concept for a TV show; I almost wish this was the start of a show instead of the end. I’m really happy that this is the direction of the season because it’s a lot of fun. I love the different villain factions warring with each other. And the cinematography conveys the scale of the situation well.

I appreciate that the episode tries to deal with Selina’s attack from her point of view instead of other people feeling bad on her behalf. The best scene of the episode is one in which Selina tries to kill herself; Camren Bincondova is really great.

The episode wastes no time on killing a major character off and I love it. Granted, many characters have died on this show followed by a quick resurrection. But I’m hoping this one sticks. It’s the final season and it’s effective to start on that note.

The episode clumsily tries to explain why Selina is still in Gotham when her and Alfred were supposed to get on the boats. Last season, they left and Bruce decided to stay; that was part of the cliffhanger. The episode pretty much ignores that because it wants Selina in Gotham. It’s not a big deal but it was jarring to see her in a crappy Gotham clinic.

Structurally, the episode struggles which is not a new problem for this show. The main issue is that there are random scenes with Riddler that only exist to establish that he is alive again and something is wrong with him. The scenes are there for set up which I get but it does throw off the pacing of the episode.

This is a solid start to the season. The writers immediately take advantage of the concept; the stakes are higher than they’ve ever been on this show and it feels like its moving at a nicely quick pace for the most part. Selina has the most interesting character work so far and I am curious how the writers will solve her paralysis. The pacing is a little off but not any more so than a typical episode of the show. And with Bruce more involved with Gordon’s story, the show actually feels more focused.