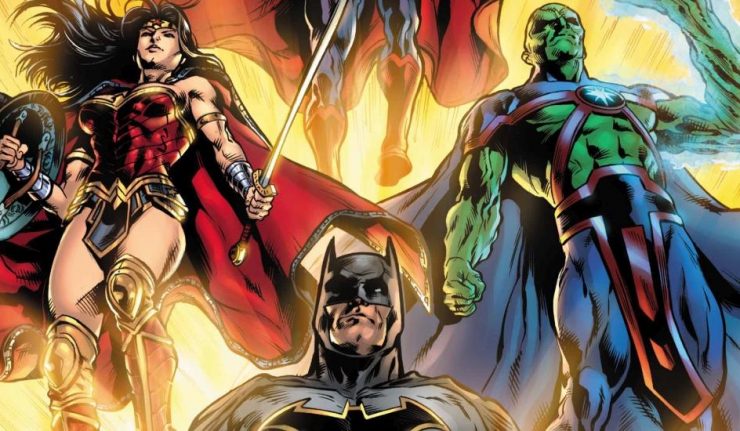 It’s a mystery in space: Why would the Guardians of the Universe hide top-secret intel deep in the bowels of a secret vault on Thanagar Prime? That’s what Martian Manhunter, GL and Hawkgirl want to know! That’s not the only puzzler popping off either, as an ancient connection that bonds Kendra and Shayera Hol unlocks the secret of the map on Hawkgirl’s Dark Metal wings. Back on Earth, Starman and the Trinity look to create a wormhole that could transport them to Thanagar Prime. The only catch? It could vaporize them!

The No Justice storyline must be getting close to its conclusion, or at least a major turning point, as this issue finally explains a lot of the backstory that has only been hinted at so far. Luckily, James Tynion IV is heading the writing duties this issue instead of Scott Snyder, as Tynion is much better at explaining these complicated concepts in a way that the readers can follow.

We learn more about Perpetua, who is apparently the creator of the multiverse which ended when the current universe (the main DCU) was created and took its place. She used the seven basic forces to created her universe. However, the Guardians discovered from legends about her that if her symbol was ever deciphered, she would return. So, the Guardians sought to hide all trace of her from the universe.

Interestingly, Perpetua’s symbol is something we’ve seen before, if only in partial form. It is a marriage of the symbol meaning “Justice” that is inscribed on certain doors in the Hall of Justice and the symbol representing “Doom” that adorns Lex Luthor’s mysterious doorknob. The two symbols together form a Yin-Yang-like symbol. It is also interesting that both the Halls of Justice and Doom are built to represent their half of the symbol.

The is also the intriguing statement from the Martian Keep: “The symbol has two meanings, J’onn. Justice and Doom. You must tell the multiverse which shape to take.” It seems that J’onn will be central to the resolution of the storyline.

Another significant occurrence is when the Trinity arrive with Starman Wil Payton, who contains the power of the Totality. Starman is radiating power that Kilowog’s power ring describes as incalculable. Starman then somehow removes the essence of Hawkgirl’s soul that exists in Shayeral Thal, returning it to Kendra. But does this mean that Shayera’s Hawkwoman is no longer one of Kendra’s past lives?

Starman states that by doing so, he is “doing what I was sent here to do. I’m here to put things right.” This foretells major changes for the entire DCU’s status quo, especially when he adds “There are many broken things in this universe. It’s time we started fixing them.” This could easily be hinting at a major continuity overhaul for the DCU; perhaps tying into upcoming developments in Doomsday Clock.

I just have a couple of quibbles. First, didn’t most of the Green Lantern Corps recently spend an extended period of time in what was supposed to be the universe that existed immediately before the current one? That universe doesn’t seem to resemble how Perpetua’s universe was described. Has that storyline been retconned away, or was that Perpetua’s universe after all?

Also, the story seems to use the terms universe and multiverse interchangeably at times, which is very confusing. Did Perpetua’s universe exist in the DC Multiverse before the current DCU, or was her universe the precursor to the entire Multiverse?

Snyder and Tynion’s Justice League can be somewhat difficult to wrap your head around at times, but it’s worth the effort. It seems that No Justice is nearing a major juncture, and here’s where we find out if their high-stakes gamble will pay off. It’s been enjoyable so far, but I will be eagerly watching to see if it succeeds or fizzles out.