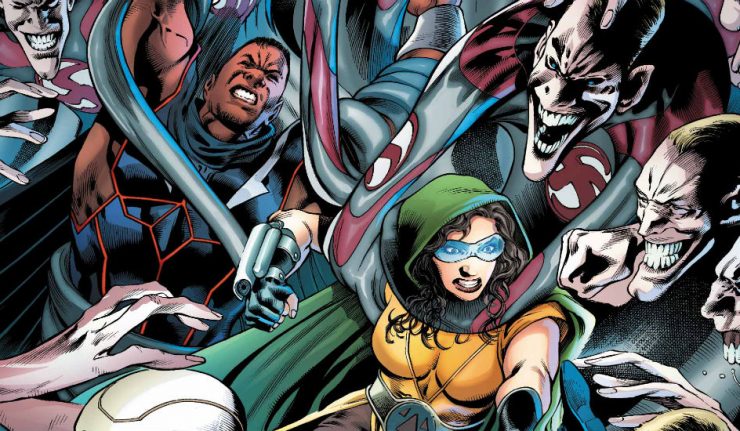 Picking up immediately from last issue’s conclusions, the Freedom Fighters, Human Bomb, Doll Woman, Phantom Lady and Black Condor come face to face with the Nazi’s giant mechanical enforcers, known affectionately by the FF as “Bozos.”  An extensive push and pull battle reveals some new powers for some of the team members, Phantom Lady has a teleportation power and Black Condor’s wings are “armed” like a fighter jet’s.

After the Freedom Fighters prevail, in the Heartland, the Extra-dimensional Realm of Ideas, Uncle Sam stirs, having been awakened by the hope that the FF have rekindled in the oppressed American People.  As many revel in the FF’s victory over the “Bozo” and subsequent escape from regular troops, in an alley, a little boy reveals himself as something more- a mysterious plastic man with “inside information” which requires an audience with the Fuhrer.

The first thing that jumps out in this issue is the outstanding visuals by Eddy Barrows and Eber Ferreira.  There are some absolutely huge shots with Human Bomb detonating against the “Bozo” and some extremely nice textural work that recalls Reed Crandall or Lou Fine, artists who did a lot of work on these characters in their original inception at Quality Comics.  Together they capture the scope of what’s going on while at the same time making it feel intimate.

While Venditti is staying away from any particular political statement, he does do an excellent job of stoking the fire of the American Spirit.  In the Heartland, when Sam begins to stir, it’s hard not to feel some excitement.  It has a universal appeal, however, for anyone with a taste for freedom and outlook of hopefulness.  Put together, these two concepts are the basis for the foundation of the American ideal.  While it may seem difficult to see in everyday life, sometimes, the ideals are what the country was founded upon and not any particular hegemony.

Lastly, the mysterious Nazi character at the end of the issue promises to provide some intrigue and danger in the coming issues.

Despite this being very much an action issue, which can often feel shallow and staid, the creative team injects enough emotion into this issue to mitigate the stereotypical “fight” comic.  While character has always been a strength of Venditti’s writing, he’s bringing these characters along slowly with subtle touches.

There’s some palatable emotion packed in this issue as well as some exceptional visuals.  Together, they make this issue a solid follow up to last month’s inaugural chapter.  It builds upon last month’s set up with a deep emotionally plunged dagger.  Nazi’s are easy to hate, but can you find that American Spirit inside yourself?