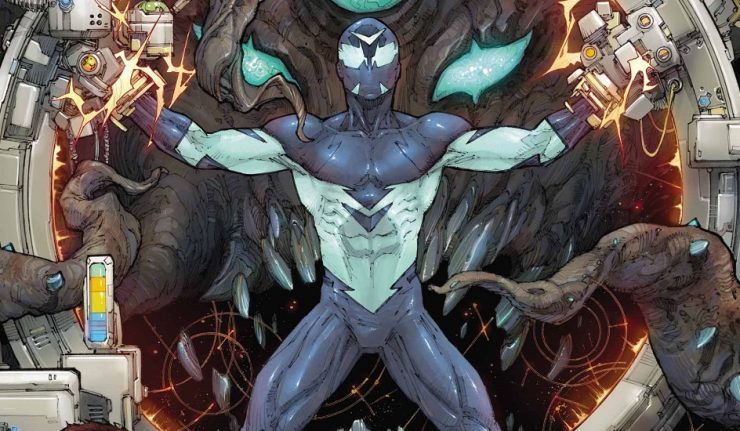 After just barely surviving the mess at the Dark Star Sciences building, Derek recaps what happened with Detective Hopkins, who may have some answers of his own.  How did Derek escape the clutches of Ms. Dominus?  What threats lie within the Dark Multiverse?  Find out these answers and more in the penultimate issue of Sideways!

At the end of issue 11, the Derek was capture by Ms. Dominus, who was going to use him to tear a rift into the Dark Multiverse to harness its resources.  Derek was in peril and about to discover who killed his mother, and the issue was at its peak suspense.  Sideways #12 starts off very well, continuing off that energy.  The beginning is very intelligently displayed through the eyes of Detective Hopkins, who is trying to get to the bottom of this just like we are.  We see the news story itself unfold as even the first few pages have “headlines” displayed on all the panels.  Dave Sharpe’s lettering skills are on full display there as he truly completes the aesthetic created at the start of the issue.

This all builds up to a showcase of Kenneth Rocafort’s magnificent art.  The billowing flames and the way the building is seemingly cut in two are brilliant. They create this feeling that Derek and Detective Hopkins are two separate signs of the same investigation, and Daniel Brown’s awesome colors accentuate this great moment.  Detective Hopkins is a great addition to this series as he represents an understanding and sanity that neither Derek or his adopted father seem to have right now.

Hi-Fi’s colors are also fantastic in the flashback sequence, especially when it comes to the creatures and scenes from the Dark Multiverse.  I completely but into the origins of these creatures and the continued mystery of the hooded figure, and I looked forward to discovering more answers along with Derek.  It was nice to marvel at the Inverse creatures and their great designs.  There were some awesome moments to watch unfold with some of the best creations of this book.  The inverse, the Tempus Fuginauts, and rifts are on display in some great ways.

The twist at the end is something crazy and totally unexpected.  I have some ideas about what it could lead to, and I am excited to find out next month!

Unfortunately, a lot of the drawbacks begin and end in the recap.  We had this huge buildup that was supposedly going to lead to some answers, but we didn’t even get to see the big moment live.  Even though the scenes depicted were intense, the framing device changes things quite a bit, as its now told through a much calmer lens.  It comes across as fairly disappointing.

Sideways’s niche is largely due to Rocafort’s art.  It’s difficult for me to think about how unsure about it I was at the beginning of the series, but I’ve come to realize the importance of the style he brings to the book.  Its common for flashbacks to be told with a different art team sometimes, but I feel like this one did more harm than good.  It’s not that the art was bad, because I hate saying that, but it took me out of the book for awhile and just didn’t seem necessary or to fit the narrative.

Ms. Dominus continues to be a stale corporate villain, whose fate is uncertain.  She really has no character motivation except to harness resources from the Dark Multiverse which is fairly unoriginal.  To have her not be Helen James’s killer means that Ms. Dominus is essentially devoid of personal purpose to this series.  The flashback sequence and the narration within it is largely devoid of feeling except for slight tones of disappointment and continued mystery interrupted by a few cool moments.

Once the flashback is over, the ending also seems fairly deflating.  I think it was necessary to have the follow-up conversation with Derek’s dad, but it also does’t seem to earn its place in the issue even though it was a sweet moment.

Sideways #12 is a series of collisions that just don’t work.  Whether it be the past and the present, two distinct art styles, the stale and the original concepts of this series, or the surprising yet flat finale, Sideways #12 does its best but largely doesn’t fit and fails to impress.