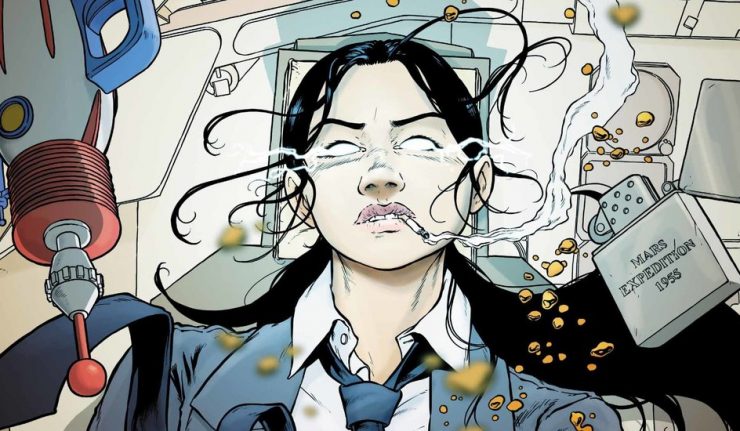 After a hiatus The Wild Storm is back and stronger than ever as Ellis and Davis-Hunt take readers on a wild ride successfully functions as a recap issue. A perfect issue to reel in new readers even if the series is drawing ever closer to its conclusion.

It doesn’t feel like long since the last issue of Wild Storm even though it has been on hiatus for a few months now. The series really needed a break and this issue does a fantastic job of bringing readers back in. While it doesn’t break any new ground it contextualizes the story of the series better than any single issue has so far.

Issue 19 is a bit like “The Wild Storm: For Dummies” in that it explains the complexities of the previous 18 issues but in a nice simple to understand manner. Honestly this series could have benefited with an issue like this somewhere around the 9/10 issue mark. With such a large cast of characters it began to get increasingly more confusing each month when certain characters were missing for months and others were sitting talking to one another, taking multiple issues just to explain something.

It’s a pleasure to see some Jon Davis-Hunt artwork again and the issue begins brilliantly by relying on his strength. The first few pages are mainly large scale, few panel pages that give Davis-Hunt the time to shine. Once readers are drawn in by these beautiful pages that Ellis script can keep them engaged. If any issue was to serve as an example of how a creative team work together, this would be it.

For the first time in months there isn’t much to critique here (and that’s not a joke about the series hiatus). Everything in the issue just works perfectly. For a series that was beginning to lose it’s lustre over 18 issues, it only took Ellis and Davis-Hunt 22 pages to bring all the excitement and promise back.

The Wild Storm #19 is a fantastic comic. If you’ve not been reading the Wild Storm there likely won’t be a better jumping on point than here. And if you’ve been here from the start then this issue will surely rekindle all the interest in the series that may have dissipated over the past months that the series has been absent from comic book shelves.