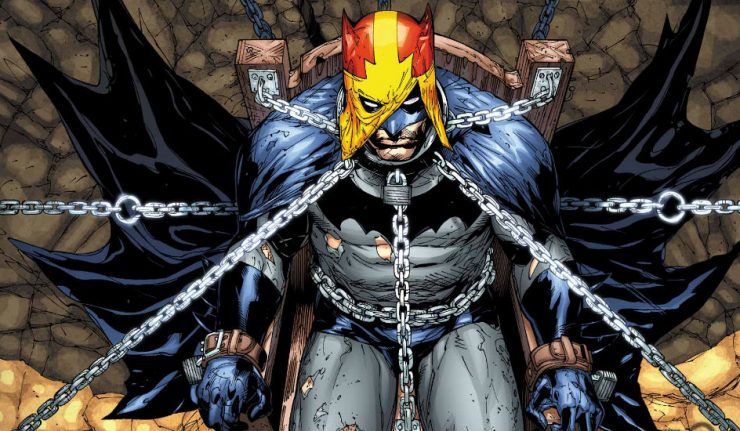 This issues picks up with last issue’s cliffhanger as Batman has walked into a trap with Thaddeus Brown, the original Mister Miracle.  The pair are trapped in an airtight room filled with water and sharks all while being bound by leather straps.  Needless to say, they are in trouble.  Batman not only saves himself, but Brown as well, something he hasn’t been able to do for all his “teachers” that have been targeted.

Upon escape, Batman must face the shape shifting creature again.  Batman succeeds in stopping it, but apparently has no new leads…or does he?  The issue ends with Batman arriving at Hugo Strange’s lab looking for answers….

This issue is a bit of a mixed bag…the whole escape sequence is well paced and exciting.  Batman’s thoughts are clear and the reader understands his plan as he executes it.  The drama is heightened at just the right moments and Batman’s desire to save Thaddeus are relatable and engaging.  This could’ve been the whole issue and it would’ve been enough.

This is probably the best Mahnke’s art has looked so far in this storyline.  The underwater effects by the entire art team of Mahnke, Alamy, Irwin and Baron work exceptionally well.  There’s no doubt they are underwater as they are able to affect a muddled clarity to the sequence.

The biggest drawback to the issue is the redundant fight with the shape shifter.  Its dialogue is over the top and elusive and it doesn’t really add to the story.  We learn nothing more about it than we knew last issue.  It chose different people in Batman’s life to taunt the Dark Knight, but it added no real substance.  It actually detracts from the issue as a whole.  Finally it’s a bit out of nowhere that Batman decides to seek out Hugo Strange, unless he’s putting two and two together and coming up with shape shifter=Hugo Strange’s monster men, despite having more the abilities of Clayface.

While this issue doesn’t move the story forward as much as last issue, the escape is well executed and an exciting bit of reading.  Additionally, the insight into Batman’s mind on both a personal and technical level is interesting and unique.  We don’t always get that deep inside Batman’s head to understand how he sees and feels these situation.  Keeping the fight with the shape shifter to a minimum and showing more of Batman’s thought process to go after Hugo Strange next would have improved the issue.