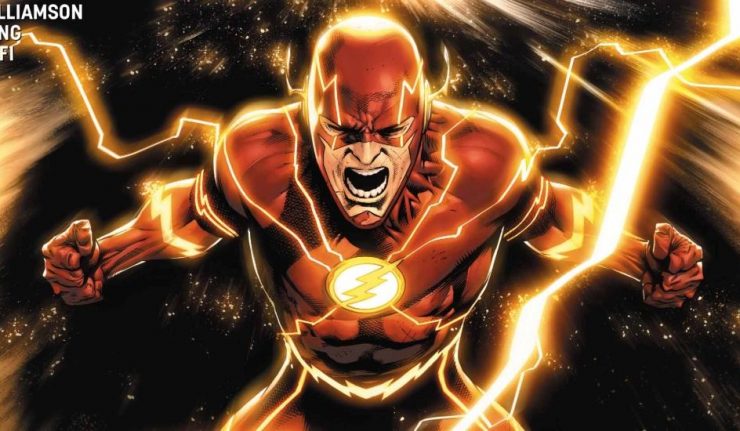 It’s two against one when Gemini tag-teams the Flash! The threat is doubled for the Scarlet Speedster when Gemini gets their hands on the Strength Force. But where’s that leave Powerhouse? She and the Flash must ride or die together in order to get her super-strength back, but they’ll have to survive a trip through the Strength Force first. Follow along in the Flash’s footsteps on the next leg of his Force Quest!

Well, it seems that Barry has reached the end of his Force Quest, so what has he learned so far? It doesn’t seem that he’s manage to figure out much. But this issue changes things, as Barry finally starts getting to the heart of the matter.

It’s also interesting how much of what he’s learnt isn’t all that surprising. He comes to the realization that instead of being worried about what a poor student he is, that he has learnt more when he was teach or training others. I remember making the same discovery in high school, when I had to help another student catch up on the math lessons she had missed while absent. One of the best ways to master a topic is to teach it to someone else.

Barry also learns that the Four Forces have never worked together, but have always been in conflict. Considering Barry’s experiences with other Force avatars, this seems rather obvious. Although Barry was able to find some common cause with Fuerza and Psych, he never really had a smooth relationship with either. Each seemed more inclined to follow their own instincts than wanting to learn from Barry.

Barry’s quest comes to an abrupt end when he finds out that a major Flash villain is behind the massacre at Gorilla City. Knowing that this villain is on the loose, Barry immediately drops Iris off at home and rushes off to process this new revelation on his own.

However, before he can process it, life deals him another blow, as the title finally catches up to the events of Heroes In Crisis, as Barry meets Booster Gold as previously shown in issue #2 of that series. Booster breaks the bad news about Wally West having been killed while at Sanctuary.

An awful lot happens in this issue, which makes it seem as if the entire issue is rushed and not enough time is given to every story beat. It feels if perhaps the Force Quest needed another issue or two to make the pacing feel a bit natural.

However, Flash fans have been dying for the comic to finally addressing the death of Wally, and asking readers to wait any longer than they already have would be needlessly cruel. Plus, if any book has to feel a bit rushed, it’s only fitting that it be The Flash.

And Barry’s finding out about Wally, while it seems a bit of an afterthought here, leads immediately into The Flash Annual #2, also out this week, where it can be more thoroughly explored.

The Force Quest didn’t deliver the definitive conclusion I expected, where Barry would have some revelation that finally establishes him once again as the Fastest Man Alive. However, the ending is somewhat more realistic as he will have to process the new knowledge he has gained, taking a more gradual approach to that goal. But the Force Quest has also revealed a number of new threats that he will have to overcome as he does so.

However, that’s for Barry and us to worry about later, as we all eagerly rush to the Annual to find out more about what’s happening with Wally.