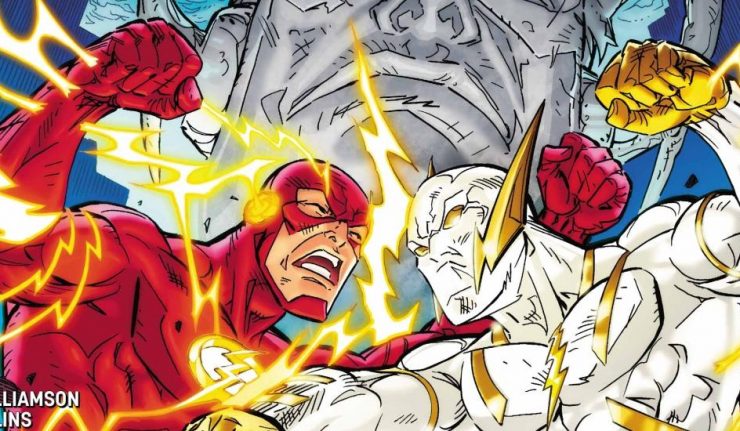 A HEROES IN CRISIS tie-in! In Barry’s grief and guilt following Wally West’s death at Sanctuary, he refuses to divulge the heartbreaking news to the rest of the Flash family until he’s searched every corner of the globe for his former partner— including inside the Speed Force itself. But his journey into the heart of all speedster powers inadvertently triggers the release of his long-lost ally Godspeed! And when Godspeed immediately races off to attack Kid Flash Wallace West, Barry must hunt his former friend and check in on his fellow speedsters. What is Godspeed planning and what does he want with the rest of the Flash Family? Can Barry protect everyone after he couldn’t save Wally? With a heart-wrenching appearance from Wally’s former sidekick, the recently returned Bart Allen, this annual is an absolute can’t-miss for all Flash fans!

I find it completely understandable that Barry’s first impulse after confirming that Wally has died is to enter the Speed Force looking for him. We have seen several times that speedsters have been absorbed into the Speed Force, with very few ever having returned.

However, Wally is not to be found there. But before he can even work out what that can mean, he encounters Godspeed in the Speed Force, who immediately attacks him, despite their having parted on somewhat friendly terms after the Flash War.

This issue may not bring Wally back, but we do get to see the recently returned Impulse, who is also looking for Wally, or any other of his family and friends. However, he seems unable to turn up any of them. It is also fascinating that Bart seems to completely remember the pre-Flashpoint timeline, as he mentions both Jay Garrick and Max Mercury. It had been canon at one point that Bart is immune to changes in the timestream. Perhaps this still holds true.

Godspeed is gathering samples of the Speed Force from various speedsters, but when he encounters Impulse, a mysterious voice tells him, “Godspeed, you are not ready for that speedster.” This raises the question of why Godspeed, who defeats Barry, Kid Flash, and the Flash of China in this issue, isn’t capable of taking on Bart. Is this hinting at some ability or power unique to Bart?

After dealing with Godspeed, Barry realizes he has to face up to telling Iris about Wally. This leads to a powerfully emotional scene. Iris’ angry demand that Barry find and kill Wally’s murderer and Barry’s shocked response clearly convey the depth of emotion at play here. Of course, Barry knows that Iris doesn’t really mean it, but he is clearly shaken that Iris would even utter the words.

Wally’s namesake Wallace takes Barry to task for putting off telling Iris about Wally’s death. This seems to me somewhat unfair. Barry had just found out about Wally, and was seeking to bring him back from the Speed Force when Godspeed attacked. Kid Flash gives Barry this lecture in the aftermath of that encounter. When exactly was Wallace expecting Barry to have given Iris the news? Perhaps Barry was reluctant to do so, but he hadn’t actually had the opportunity to do so yet.

I find myself growing tired of Wallace’s attitude towards Barry It’s about time that Kid Flash got rid of the chip on his shoulder and properly patch things up with Barry so that Wallace can get back to being his old more likeable self.

I was also somewhat disappointed that much of the issue was spent on the fight with Godspeed rather than on Barry dealing with Wally’s death. However, the beautifully written and drawn opening and closing scenes were enough to do the storyline justice. Plus, there are hints that Wally’s story isn’t quite finished yet, so I am certain that we will see more of Barry and Iris dealing with the news of Wally’s demise.

I have been waiting for this Annual since it was first announced that this is where we would start to see the events of Heroes In Crisis reflected in The Flash and I wasn’t disappointed. It has been rather strange to not see those events not reflected here before now. Also, we see a bit more of the mysterious villain Crisis introduced during the Flash War, who promises to be a major threat to Barry in the coming months.