Synopsis: Using Sherloque’s memory machine, Nora attempts to enter Grace’s mind alone to avoid her own secret memories exposed and becomes trapped, prompting Barry and Iris to follow and discover a heartbreaking memory of Nora’s; Ralph asks Cisco to investigate but with a secret agenda.

A TV writer’s objectives are simple: write material that builds engagement with the viewers’ expectations so a bond can be formed with the characters and plot, but throw in curve balls when necessary. And man, did we get some this week involving the daughters of both hero and big bad. 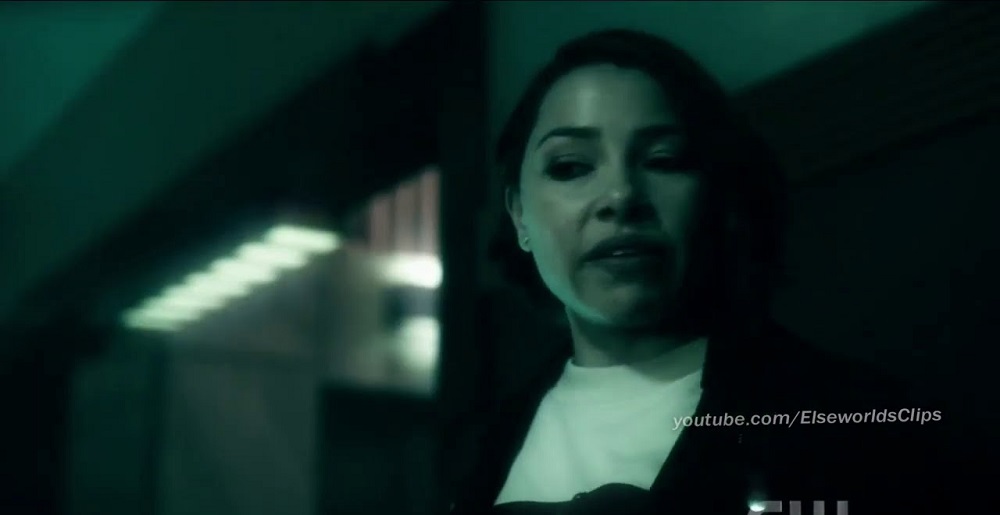 Nora’s monologuing both at the beginning of the episode and at the end – revealed to be a journal entry to be sent to Eobard Thawne – is very much how the writers had put a spotlight on Barry’s inner thoughts from one episode to another in the earlier seasons. Since Nora is the rookie speedster, it’s a perfect fit and deviates given it’s a correspondence, one with content for the viewer that describes how far Thawne’s involvement has been in her development. He’s taught her how to lie and cover her tracks, and who better than someone who spent fourteen years concealing his true identity? Someone once said that it’s the actions taken when no one is looking that truly defines a person, which is a double-edged sword. The fact that Nora tries to tamper with a mechanism she’s unfamiliar with – Sherloque’s machine a memoire (nice Mad Hatter name drop btw) – and one that is crucial to the plan of waking Cicada’s daughter from her coma is very telling of how scared and desperate she is. So is her rash decision to enter her mind alone and becoming trapped as the result. Her chemistry with Grace throughout the episode – more on that kid later – ultimately fails when her lies catch up to her. Her branding Nora a liar has extensive connotations for the viewer because of what she’s doing behind her parents’ backs. Still, it’s clear that Nora is sincere in her desire to not hurt her parents, and the heartfelt apology Nora finally offers to her mother for how she initially treated her is both well-written and well performed by Jessica. While the fear of discovery is understandable, it’s evolved from fear of damaging the timeline to fear of rejection by the two people who have come to love her as she them. She now has something to lose and, given the source of her guidance, she’s deathly afraid that they’d never understand. That fear is common for anyone at any age when going their own way, and it does not always pan out. The uncertainty of how Barry and Iris will react to the truth hooks the viewer in to Nora’s plight and keep them engaged till the resolution. And with Sherloque sniffing at her heels, that moment of truth is coming. 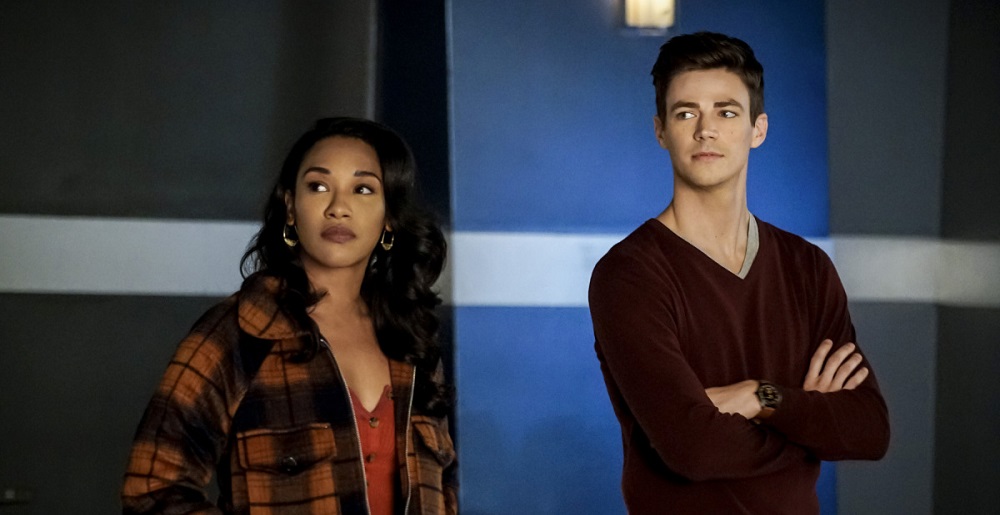 Barry and Iris this week are divided in their focus on both the present and the future. Iris entering Nora’s mind and seeing a cruel interpretation of herself and reminder of Barry’s future confirms a deep fear. She initially thinks that this is ultimately her fate no matter whether she does start her own newspaper – Central City Citizen namedrop – or not: A woman hardened by the loss of her soul mate and not averse to that harsh approach to her daughter. The sharp black-and-white view of the world that Nora interpreted parallels with that of Grace, and is just as misconstrued. Kids don’t see a grey area with people; they’re either all good or all bad, so Nora seeing a memory differently at seven years old is not that much of a stretch. What was introduced in the season four finale – entering someone’s mind to wake them up, like Barry did with a Devoe-possessed Ralph – is extended in impressive ways and allows Easter Eggs in S.T.A.R. Labs. Off-topic, it’s both funny and awesome that the writers took this opportunity to give Barry a glimpse into his legacy via The Flash Museum and Grant’s reactions on the level of a kid in a candy store with Candice bringing in the punch lines. Speaking of Easter Eggs, that comic the camera zoomed in on was from the actual storyline by Geoff Johns that introduced Cicada as an enemy during Wally West’s tenure as The Flash. Very risky, by the way, introducing the existence of DC Comics in the Arrowverse reality. Still, if the late Stan Lee can insert himself, Jack Kirby, and Marvel Comics into an early 1960s Fantastic Four issue – trippy mind swap issue between Reed Richards and Doctor Doom, by the way – so can the CW. Oh, and for Star Trek fans, the voiceover of Dexter Myles is actually Rober Pircardo, better known as The Doctor on Star Trek: Voyager! Anyway, back to Iris, seeing her daughter as a little girl and understanding the cover story for Barry Allen’s connection to the former S.T.A.R. Labs helps her to better understand Nora before her apology. The writers are smart to convey the notion of moving forward by having Iris ultimately become the founder of The Central City Citizen. It’s been gradual since last year, but they are acknowledging the fans by moving Iris away from “girl in the chair” in the Cortex to becoming the reporter she’s known for in the comic.

Now in comes the curve ball: Grace Gibbons. The happy ending that Team Flash was hoping for turned out to be a dead-end, and one that could be generational. The writers with their Inception fixation this week examined what life has been in this seven-year-old’s mind since being rendered comatose. It is indeed a dream world that also allows for Chris Klein to be something of a parody of himself for the kitchen scenes. Of course, as noted above, this is how Orlun Dwyer appears through the black-and-white rationale of a child. People are either true or false. When she discovers Nora’s been lying to her, that innocence is dropped in favor of a vindictive, hurt child who not only is aware of her uncle’s actions but supports them. The difference in lighting in both her mind – a dull greenish grey tone – and the XS violet shades in Nora’s could be an indicator of a distinction in their general outlook on the world. It’s a cool twist making her comatose state actually be connected to her mutation via that shard in her head that is now glowing. Regardless of Nora’s flustercluck – see Netflix’s The Punisher Season Two for that reference – it leaves one to wonder exactly how deep Grace’s resentment of metahumans goes, especially given who she’s been listening to. The female Cicada she conjures is a point of interest; according to the Flash museum records, Cicada resurfaced in 2049. Could this be Grace’s future? Does she inherently despise metas because of one being involved in the death of her parents, stoked by the anti-metahuman rhetoric of her uncle, who, in turn, is being encouraged by Dr. Ambres? Will she inherit her uncle’s mantle? No pun intended, but time will tell. The real question will be what will happen when she finally awakens, now that it’s clear she’s not the nuclear deterrent Team Flash was hoping for? 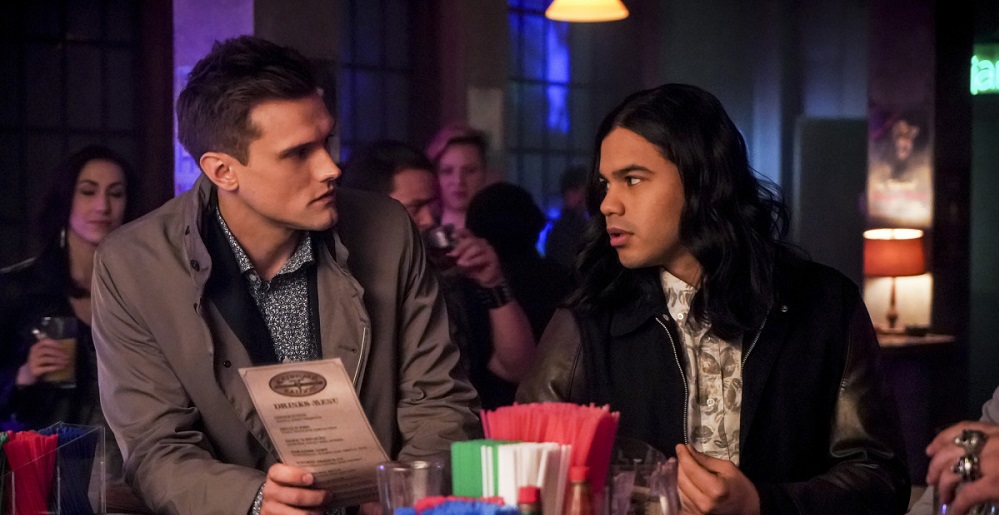 The Book of Ralph never disappoints, as he assists both Iris and Cisco this week. While Iris’s situation was open and closed, his inclusion of Cisco in just a guy’s night out could have been handled better. Cisco is only partially right in that Ralph still has a tendency to cut corners to get results, but this was altruistic. Sawyer’s work this year has been phenomenally different from last season. Like Iris, the writers have evolved this one-time P.I. douche bag and given him decency and emotional investment in his adopted family. He also has sentimentality, recalling the Zamboni driver’s example to encourage Cisco to enjoy life and take chances. That bartender’s text shows that it paid off. His assistance also allowed Cisco to make the mental leap in his conception of the metahuman cure. Cisco has been through the emotional ringer this year and Ralph has been there to genuinely help him through most of these tough spots. It’s a cool role reversal since it’s usually Cisco that’s laid back and encouraging everyone to see the fun of what they’re doing. While Carlos is usually known for great comedy with Tom in any of his Wells personas, he has great chemistry with Hartley.

I think the only complaint I have this week is Barry’s ultra-chipper attitude regardless of what gets thrown his way. While it’s cool to see the 12-year-old geek light up in his own museum, I don’t feel that Grant was as emotionally invested as he should have been for the very dramatic moments. I don’t expect him to be over the top, but it seems like the only times he was tense was when he gave that glance at The Reverse-Flash’s uniform. I just feel that he was taking it easy this week at certain points when he should have been more serious. 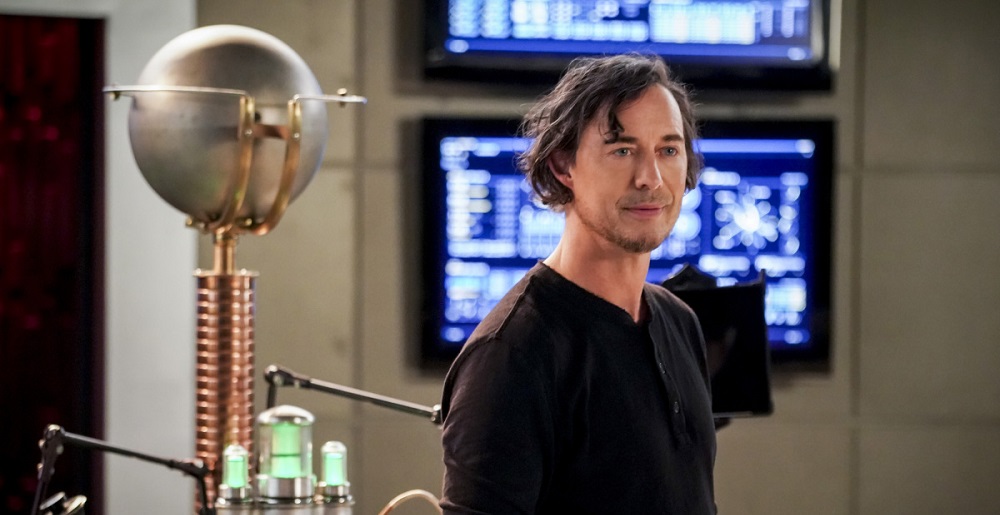 I give this a solid 4.5 out of 5. Giving Jessica another chance to take the lead in the plot paid off in both revelations and character development. The sense of moving towards one’s destiny is working for both Iris and Ralph. The curve ball of Grace supporting Cicada, and possibly taking over when she comes of age, worked brilliantly. An easy fix became just another facet of the problem. Tom Cavanaugh as Sherloque Wells did not disappoint in his humour and delivery, and Easter Egg-a-plenty in the Flash Museum sequences. Great work this week, you guys, and you never make me regret getting up at 2 AM to use Bell Fibe to review the latest instalments of The Fastest Man Alive. Adios for now, fellow Speedsters.