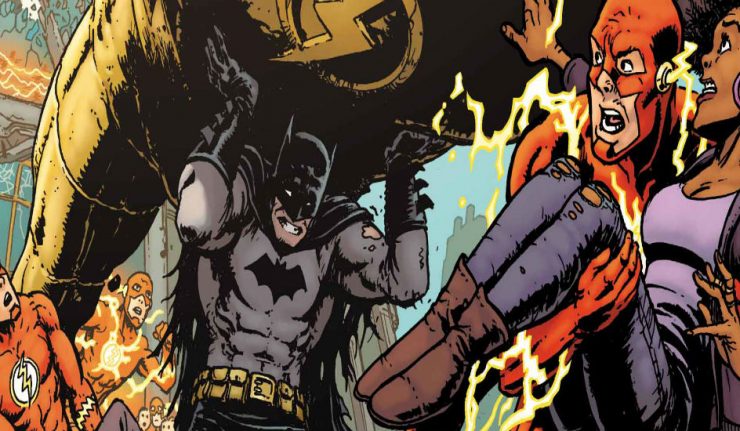 Batman is starting to feel the effects of working nonstop on the Sanctuary case. Still trying to find the murderer of Wally West, the case seems to have stalled, leaving the Dark Knight with a feeling of guilt. However when a situation arises in Central City, Batman goes to investigate and finds out that his case still has more doors left to open.

The issue itself starts on a somber and humbling tone, with Batman actually working on an autopsy of Wally West’s body, at an attempt to find clues about his death. March does a great job on each page showing how difficult it is with Batman to cope right now– even as he attempts to pretend to the League that he’s ok. As always it’s a joy to see Batman and the Flash working side by side but thanks to Sanctuary, there’s some tension between the two heroes. Both Barry and Bruce are great detectives in their own right, so when there’s not a break in this case it’s understandable that’s it’s getting to them both mentally. The conversation between the two isn’t as lighthearted as it used to be, and instead of working together after the attack of an unknown supervillain, the two are hardly working together at all.

The fallout of Sanctuary is far reaching, and it’s ripple effects are felt here in Batman #64. I have no complaints about this issue. The writing is great, the action between the Flash and Batman is awesome, and March’s attention to detail in this book is great. The big reveal seems to be that Gotham Girl has returned, and she seems to be behind the attack that our heroes investigated in the first place. It seems that her motives revolve around the return of the thought dead hero Gotham. Williamson shows Gotham at the end, drugged and tied up with tubes as Gotham Girl is seen smiling with delight at the thought of the return of her dead brother. If you remember Batman from issues way back, Gotham Girl was almost driven mad thanks to Psycho Pirate, and I believe that influence is still within her.

Batman #64 is a great read, especially if you enjoy Batman and the Flash team ups. Also it’s good to see some tension between Bruce and Barry as well. It seems that Gotham Girl is set on bringing her brother back from the dead, but I’m wondering if this is linked to Sanctuary at all? If it is, I’m pretty certain that Bruce and Barry will find the connection–that is if they can work together again on this case! I can’t wait to read the next issue of Batman!