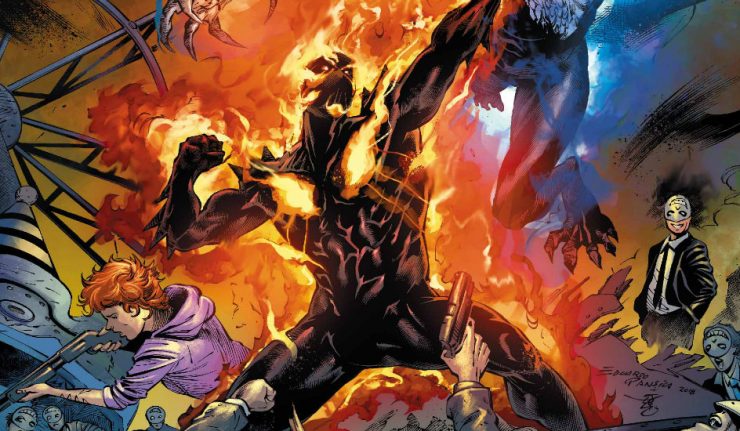 This is the first part of the two part finale of this series. If you thought this was going to be a lot of standing around and doing exposition, you would be wrong. Let’s just say this. It starts with all of the Salesmen getting run over by Annie and then we jump directly into an other worldly battle where Joe becomes Brimstone and all hell breaks loose (and there is a lot of exposition. I mean come on, that is what this book is about).

As has been the case for this whole series, regardless of who has done the art, it is the centerpiece. In this book, where Joe goes all Brimstone and fights the Salesman (men?) and the agents while Annie unloads her never ending shot gun, there is so much to see. Where to look? Well, I would recommend taking your time with each panel because there is only going to be one more of these and this art is stunning. Action scenes, in general focus on the guy or gal in the tights beating the baddies. Here though, no tights, no one baddie.

Considering she is the non-supernatural entity, it hard to not look at everything Annie is doing. She is cut, she is covered in glass, she is tense. She is ten steps ahead of everyone. All of that in just a few wonderfully done panels. Kudos to the art team of Stanisci and Cowan.

Well, as I mentioned in my summary, this book has be weighted down with exposition. That is not always a problem, but all of this is done with dialogue and that doesn’t work. It feels too much like that Bruce Willis/Damon Wayans Sr. movie the Last Boy Scout. In that movie, there is a whole bit where Willis’ character is explaining to Wayans Sr.’s character that you can’t just punch a guy in the face with a surfboard without having something funny to say, like “surf’s up.”  Imagine that for a whole comic series. Just a bit too on the nose for my liking. Joe constantly is saying exactly what he thinks out loud to everyone who listens.

Overall, just like the rest of this series, this is OK. It is not the worst thing I have read in a long time but not the best. It is a solid C. Annie is a great character who deserved better. More on that in my final review next month. For now, if you have stuck with it this long, keep on keeping on.