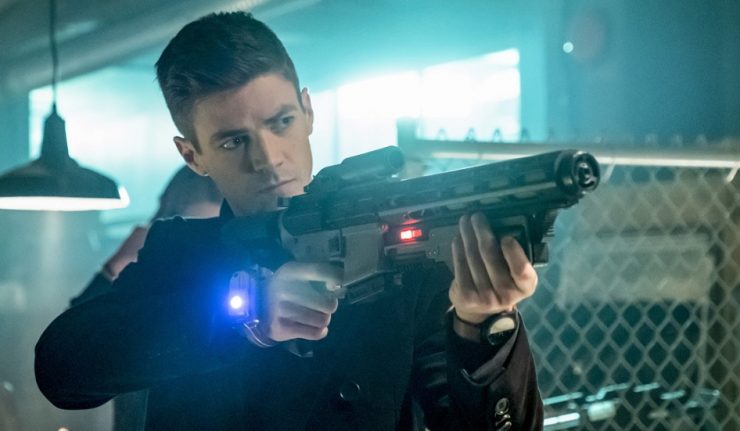 Synopsis: Barry and Ralph go undercover as criminals to obtain technology needed to take down Cicada, but get in over their heads; Nora distracts Sherloque’s investigation of her through matchmaking; Iris investigates Cicada directly and places herself in the same room as Orlin Dwyer himself.

What makes this episode work is that you see characters embrace one another’s traits from their comic book counterparts while others go outside their comfort zone and prove their mettle. And yes there is also the lengths one would go to protect their secrets.

Let’s start with Barry and Ralph’s situation. This is literally a season one Oliver Queen move for Barry that we’ve seen only once but not to this extent. I don’t know whose idea it was for the 90s style gold chain – Did Barry actually have that gear in storage? – but his ability to think on his feet (or knees) serves him well for the most part. He probably investigated those crimes he took credit for himself. Nice Superman nod to the name drop of “Toasters,” the weapons famously developed in the comic by John Henry Irons aka Steel and the catalyst for his entry into the superhero life. What worked the best for this undercover operation was that Ralph, the one determined to do whatever it took, decided to stop the attempted theft when he saw the intended patients this 3D printer was for. Dibny’s line is obviously the welfare of kids, and these guys crossed it. The Achilles Heel strapped to their wrists by Goldface was a very much a trial by fire. Ironic considering power-dampening technology is Cisco’s baby. The biggest hurdle for Team Flash this year is Cicada’s ability to dampen metahuman abilities via his dagger, making his victims susceptible to defeat. Barry can’t use his speed, Ralph can’t stretch, Cisco can’t vibe, and so forth. So although a throwaway villain, Goldface was practice for Barry and Ralph in the final fight. Good reveal of Goldface being a meta himself, adding another layer to the paranoia of the power-dampening cuffs. While their objective was lost, the bigger win was their ability to take down an adversary without the use of their powers.

Iris taking on the investigation of Orlin Dwyer’s whereabouts shows definitive growth in how far she’s willing to go. Candice has been given great material to work with this year aimed at driving Iris towards the investigative reporting she’s known for in the comics. Making her the actual founder of the Central City Citizen last week was an allowable creative liberty. The scenes between her and Chris had the right amount of suspense and subterfuge as Iris is trying to get out of the house through the door when caught by Orlin. This is also the longest we’ve seen Klein out of Cicada’s mask since the episode featuring his back story. Good move at making him not even attempt to hide his rasp. It’s very much a battle of wits as the paranoid Dwyer is on red alert as Iris is asking BS questions dressed up as an actual interview. The fight choreography is grounded on Iris’s side; she’s no Sarah Lance but it’s cool seeing her get her share of blood in and able to get out of that situation on her own. Making Iris less of a damsel that has to be sped off to safety and more of a woman able to stab a super-powered villain in the chest without a second thought makes her more capable and independent. It also shows her maternal side because she is trying to protect her daughter from this psychopath. I look forward to seeing more of this side of Iris as the season progresses.

Another hilarious layer of Sherloque Wells is revealed through Nora’s misdirection of his investigation of her. Tom gets a great showcase in the distinction between Sherloque and Eobard Thawne in 2049. The back-and-forth shift between present day events and a previous monologue of Thawne conveys both Thawne’s ability to manipulate events and Nora’s willingness to go along with the plan. This episode also gives Kimberly Williams-Paisley, through the role of Renee Adler – yes, Sherlock Holmes fans, ADLER – the same challenge/opportunity as Tom to portray the same character in four different ways. It is hilarious to see the goofiness of Sherloque extending to him going after the EXACT SAME WOMAN in four different dimensions like Einstein buying five sets of the same suit. The “Council of Adler” as I’m calling them works in that it holds Wells’s feet to the fire regarding his alimony obligations and gives him something to think about with this new version on Earth-One. The plot device of Sherloque properly distracted via a potential fifth chance at love works in that his distraction is tied directly into his renewed efforts to stop Cicada. Bookending the lab sequences of Nora spying on Sherloque and phasing through the exact same wall was also a brilliant visual that you’d only find in a comic, the strength of this show.

The only complaint I have is Iris tipping her hand by telling Orlin they are going to stop her. Too often the plot device of the villain discovering the hero’s identity is used in this series, and it happens as often as Barry unmasking to gain an ally. It makes you think that he should go the unmasked route that Oliver Queen is currently pursuing in Arrow. It’s an overused subplot that should not always be the only route to go in any superhero series or film. It’s enough for Grace to know that Nora is The Flash’s daughter, and possibly Barry is The Flash (just unmasked, though) after last week. Still, she did see Iris there, too, so the cat may already out of the bag (again). I’m just saying it’d be cool to have a big bad that is able to be a legitimate threat without learning Barry Allen’s true identity.

I’m giving this a solid 4.5 out of 5. Character growth and development are strong in this episode, as is the inclusion of 90s rom-com and Two and A Half Men actress Kimberly Williams-Paisley in another Doyle parody character to compliment Sherloque Wells. I notice that this is the second episode that doesn’t feature Cisco. It leaves one to wonder of Carlos Valdes is indeed planning on leaving the show, which would greatly change the dynamic a little. Personally I hope that because the master of granting villain’s names would be greatly missed.