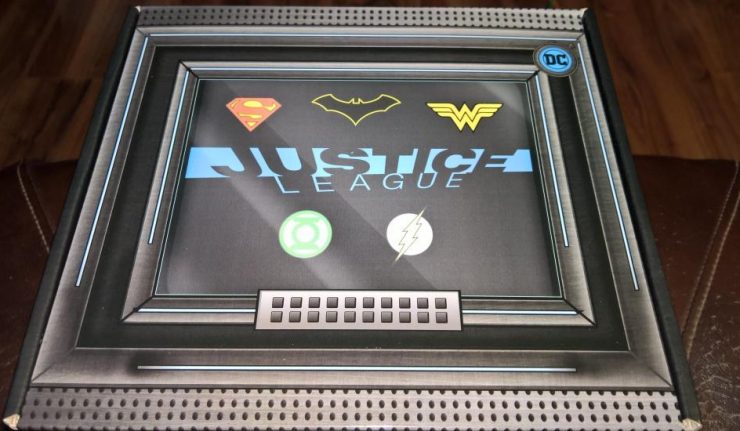 CultureFly has teamed up with Walmart to release a series of loot boxes. These loot boxes are scaled down versions of the boxes available directly from CultureFly’s website. One of these is a Justice League themed box with a selection of items previously released in their World’s Finest: The Collection line of boxes.

I have just obtained one of these at my local Walmart, and will share with you what I discovered as I unboxed this mini-trove of DC memorabilia. Not all the contents are a mystery to the buyer, as a sticker on the box lists all the items except for one mystery item, which is represented by a silhouette of Batman.

The box itself bears the New 52/Rebirth comic logo of the Justice League, which suggests that the box is themed on the comics, not the movie. It also shows the symbols for the five most prominent Leaguers: Superman, Batman, Wonder Woman, The Flash, and Green Lantern. Sorry, but it appears that Aquaman, Martian Manhunter, and Cyborg didn’t make the cut.

Popping open the lid, the first item you see is a jigsaw puzzle of the Superman S-shield. This is the classic version, which was restored during Rebirth, after being eschewed by the New 52 reboot. This is hardly surprising, as this version was still used in DC merchandising, even during the New 52 era. This puzzle wouldn’t really offer a challenge to an adult or teen collector, but would serve as a nice display item.

The next item is a pair of Flash-themed socks. An item of footwear seems only appropriate for the character. You can show off your fandom by wearing them, but if that doesn’t fit your sense of style, you can also add them to your display of DC memorabilia.

Next is a metal pin of Wonder Woman’s double-W symbol. Once again, it makes a nice piece for display or wearing.

For Green Lantern, we get a very interesting item indeed. In fact, I think this is the best item in the box. This item is a ceramic planter pot in the shape of a Green Lantern power battery. It’s not full-size, but it is still a cool item, and looks accurate to the comics. While you could use this for growing a plant, that might make it difficult to keep it in good condition.

This leaves the mystery item, which unsurprisingly is a vinyl figure of the Goddamn Batman himself. Well, it says figure, but it’s really more of a mini statue than a figure, considering it’s not poseable at all. This 5 inch likeness of the Dark Knight sports his Rebirth costume, which makes it slightly out of date, but is still a nice addition to any DC collection.

And that’s the whole of the box’s contents. Only five items seems a bit light, but consider that this is a cut-rate sampler for the series of loot boxes that CultureFly is selling through their website. Each of those contain 7-10 items. The items here should give you a good idea if a subscription to their DC loot boxes is for you or not. If not, at least you get a cool assortment of DC treasures for your collection. I am quite happy with the selection of items offered here.