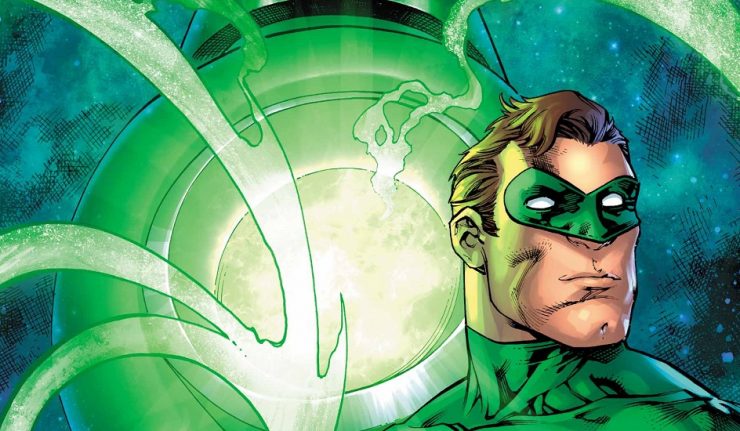 In these pages lies a tale between two strangers containing threats, intrigue, heroic spectacle, and beings who eat the sun.  But look closely, as something may be more familiar than initially perceived…

INTERGALACTIC LAWMAN.  It’s the spirit introduced in the first issue and continues to permeate throughout this run.  The Green Lantern has been described thus far as a police procedural, a story that clarifies the jurisdiction of the Green Lantern corps, a look through the eyes of the law through a cosmic lens and more, and it all falls under what it means to be an intergalactic lawman.  In The Green Lantern #4, we get to see a new type of law: the law of the west.

The issue is the Spaghetti Western of comics, complete with unclear allegiances, clever manipulation, and a juxtaposition of large-scale, dramatic conflict with tense and nuanced conversation.  The first scene makes this abundantly clear as it stars with meeting between two parties under a bright blue sky.  The full talents of everyone involved are on display here creating a very defined atmosphere for this meeting.  Morrison and Sharp do a great job laying the foundation for the planet of Weirwimm, so that it feels like a planet that’s existed for years.  It’s Oliff’s colors, however, that portray the beauty of the planet and the realness of its inhabitants.  It’s Orzechowski’s lettering that gives an air of importance to aliens we have never seen before.

Unfortunately, we quickly learn that the planet was born to be doomed as the walls quickly close in across the panels and an ominous cloud appears in the sky above.  A looming presence lurks within every panel in subtle and not-so-subtle ways, from the cloud growing with each page to the towering figure that demands allegiance to Controller Mu.  The story escalates tot he edge of doom before settling the reader on Rann where two strangers are having a drink.

It’s a talk one may not expect to occur out in the open, but important conversations are often had in the saloon of that era.  The sky and buildings are a colored in a glowing yellow, much like the desert, from Steve Oliff, and the beginning of a standoff, where two equals stare each other down, takes place.  The man with no name and the Blackstar are always depicted across from one another, and the tension in the air can be felt through the panels.  There’s something off about the whole situation, but no one, not even the reader, can figure it out just yet.

The key to a great western is pacing, and the slow palpable build during the scenes on Rann do a great job of making the story come to life.  No western would be complete, however, without a tale of grandeur and triumph.  I’m talking about the stories of legends, and the kind of story that a man with no name might tell a Blackstar.  As the mysterious four-armed figure starts his tale, I must commend the use of white by the art team. The mysterious figure stands over the first image because it’s his story to tell and his world to create.  The story is told in fragments, visually depicted in an excellent paneling style from Liam Sharp. Maybe not all of it is true, maybe pieces are omitted, or maybe it visually mimics the sun being devoured by the sun-eater.  It’s an excellent visual style that contrasts with the bar on Rann.

The story that follows from the man with no name is a high-stakes rescue mission on a cosmic scale.  It almost reflects a divine nature with with a brilliant purple and black sun-eater with tentacles that almost rise from the underworld and devour all light.  Even the bravest of heroes look small under such a powerful threat, but light elegantly prevails as divine, green hands reach down to save those in need, and the light of will heals the fractured images on the page before our very eyes.

Understanding that the eyes are the windows to the souls is very crucial to the idea of this issue.  The man with no name keeps his eyes hidden beneath the brow of his hat while the Blackstar keeps theirs hidden behind a helmet, yet, the panel where they stare each other down through the glass of beer is the most intense panel of the issue.  As the story continues, we learn that the man with no name has a name after all, one that is very familiar.  We learn a bit more about a man under scrutiny who only wants to do the right thing and save as many people as possible.  He knows he’s made mistakes, but he can’t deal with that now because there are people in danger.  We see a man who is flawed, but continues his mission.  As the story continues, Hal Jordan stares back at us through the center of the page, as if to say, “Do you have what it takes to do this job?”  I certainly know that I don’t.

Our heroes were victorious, but at a cost, and as both figures reflect on the consequences of the tale some striking imagery is portrayed showing both the man with no name, and the Blackstar looking off to the right, and striking silhouettes of both parties outside of any panel as if to say that whomever controls the narrative controls the power.  As both parties finish sizing each other up, they have everything they need to make their move.  Both leap into action at a breakneck place all taking place in the last moments of the issue.  Day becomes night, their eyes are revealed to each other,  and blackness intrudes upon the panels as the issue reaches its conclusion It’s a final decision that you’ll have to read to believe, and one that’ll leave you wanting more.

Most spaghetti westerns have extremely unconventional pacing throughout the story and this issue is not different.  Certain pages are slow and methodical while others fly by at light-speed, and that may not be for everybody.

The Green Lantern #4 brings the spaghetti western to comics in a spectacular cosmic fashion that defines the true meaning of the words Intergalactic Lawman.