Court of Owls Novel On The Way 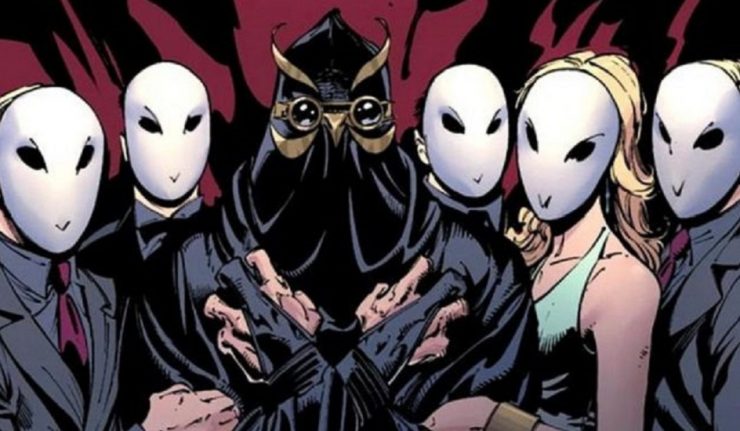 The illuminati-esque organization nestled within Gotham’s very walls and streets returns, but in the written word under the direction of writer Greg Cox in a new novel.

The brainchild of Scott Snyder for his initial Batman arc in the New 52, the Court made their presence known with a vengeance as a centuries-old organization popularized by myth and nursery rhyme. In clandestine ways, they have been credited with controlling the deepest infrastructures of Gotham and utilizing resurrected members as their “Talons” for assassinations and intimidation. Batman himself had been fascinated by the court from childhood, initially suspecting them in the gruesome murders of his parents. Snyder crafted the Court as an analogy of Gotham as an antagonist since it and The Court are virtually symbiotic; one would not exist without the other. Cox has nothing but praise for Snyder and artistic collaborator Greg Capullo for their initial story arc.

“I love the idea that owls are the natural predator of bats,” Cox concedes, “and the way the Court is nested deep in the very foundations of Gotham and its history, dating back to long before the Batman was the thing. I also see them as the embodiment of the worst aspects of the 1%. They’re robber barons and aristocrats who have put their own power and wealth above the welfare of those ‘beneath’ them. Small wonder they hate the Wayne family, who have always been reformers and philanthropists.”

The Court has also been documented to have had their claws in the directions of the associated families of Batman’s world. They had initially eyed Dick as a potential Talon before his parents were killed by Tony Zucco, and even stopped Alfred Pennyworth’s father from warning his son away from assuming his post at Wayne Manor.

Cox himself is a writer with an extensive body of prose for both Marvel and DC and even wrote the novelization for the 1992 film Batman Returns. This latest work is the third in a series of novels set in the DCU, following The Killing Joke and Mad Love.

As a future project, his preference is The Spectre. “I have a pronounced weakness for the ‘spooky’ heroes: the Spectre, Doctor Fate, Madam Xanadu, Doctor Strange, Brother Voodoo, Morbius, etc. If and when somebody does a Spectre movie, I would kill to do the novelization.”

Batman: The Court of Owls sees The Dark Knight once more drawn into the Court’s affairs through an investigation of charred victims, one of which found with a talon. The novel will also see Bruce make it a family investigation with the inclusion of Dick Grayson aka Nightwing and Barbara Gordon aka Batgirl.”

“Barbara [is] mostly involved as a historical detective, using her superlative research skills to help Batman probe Gotham’s shadowy history, but she eventually suits up to join the action as well. Nightwing is also needed because even Batman can’t be everywhere at once.”

For this project, Greg delved into the trade paperbacks from the original Snyder run and admits he can only aspire to make this project as relevant as the group’s introduction. “Beyond that, “ he adds, “ I hope readers will be intrigued by historical mystery aspects of the book as well as the superhero action.”

Batman: The Court of Owls will be released later on this month on February 19th.