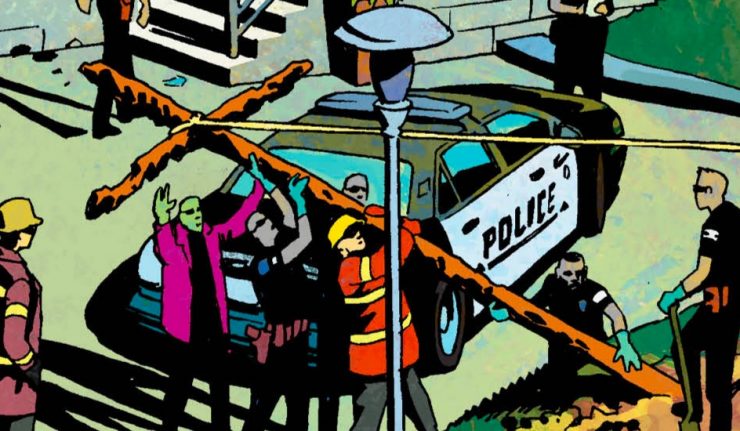 Wynn Morgan isn’t just a wealthy Los Angeles industrialist, he’s the unofficial king of a vast white nationalist movement and the prime suspect in the murder of an FBI agent. But a dead fed may prove to be the least of Morgan’s problems when dissension in the ranks signals what could be the start of a secret civil war, with white-passing undercover agent Richard Wright caught right in the middle.

Personally, the interior art doesn’t work. There’s a fantasy section in which I think it’s more appealing and the style works. But in this heavy social commentary that is being played mostly straight, I find the art distracting. It’s not as detailed as I like and I don’t think the style fits the tone.

The story has kind of lost me. I like the idea of a political conspiracy manipulating hate and bigotry which has been present throughout the series. It’s still there but there isn’t a whole lot that happens in this issue. I found last issue’s cliffhanger to be really interesting but it turned out to be less engaging that I anticipated. I was fairly bored with this.

I wish Trump hadn’t been mentioned. I understand what this series is paralleling and what it’s trying to say. I didn’t need it to be made so overt.

I didn’t care for this issue. It didn’t work for me on really any level. I don’t like the art. And I found the story a little dull like it’s just spinning its wheels.