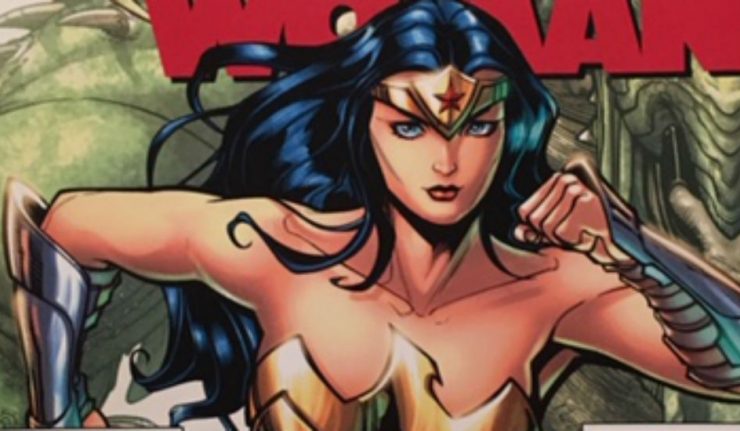 Diana has a nightmare about being kicked out of the Justice League because of her failing powers. She wakes up to a sore broken ankle, just as Jonah Hex has returned from burying Steve’s friend and fellow pilot, Nate. As questions still swirl around the alien Princess without a name, Hex is happy to declare he doesn’t trust her. The argument is interrupted by the Cheetah who’s been lurking about in the underbrush. She somehow manages to relieve Diana of her golden lasso which results in everyone chasing the feline felon.

They are interrupted again as more aliens arrive to arrest them all including Princess Sibella for grand theft spaceship…so, that’s her name!

Positive
Diana’s reaction in her nightmare is measured and reasonable. She does not break down into hysterics or go over the top in her indignation. If nothing else, it keeps the story grounded and focused on the present, while acknowledging one of Diana’s fears. How Diana continues to deal with her loss of powers will be an intriguing element. It’s obvious this isn’t permanent, but it still provides an opportunity to explore different aspects of her character.

The mix of characters provides an interesting dynamic. It’s a real challenge for Diana to work with Hex, who’s very different from everyone she’s used to being around, except maybe Batman. Learning a bit more about Sibella is finally a relief! She’s the most enigmatic character in the story so far and has the potential to be a real surprise. Still betting on Coluan!

Negatives
This might be the best installment of this story so far, difficult to find a negative.

Verdict
The addition the Wonder Woman (2006) reprint to the title as well as the re-branding are indicators of the significance of Wonder Woman. The new story continues to develop and provide some different angles on these familiar characters. With this installment, the story is really running and feels like it’s very open ended with anything still possible. Better not miss next month!