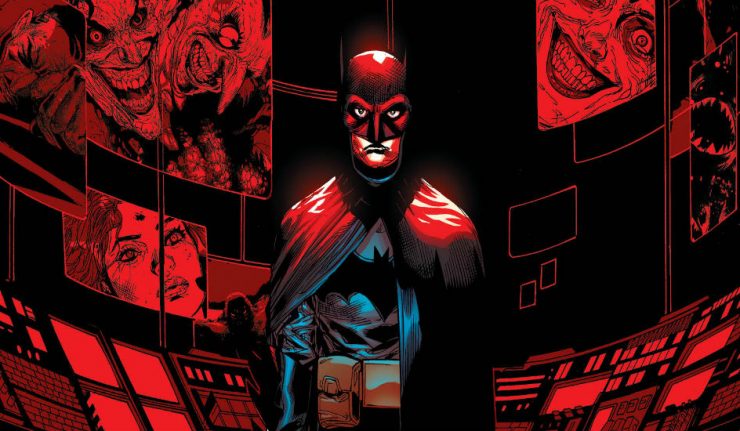 At the end of issue #998, Batman had come face to face with himself.  Himself as a child that is.  That was a clue that nothing had really been as it seemed.  While not quite the same as Grant Morrison’s post hypnotic routine from his Batman of Zur-En-Arrh, this story turns out to be a self-inflicted test by the Batman on himself for his birthday.  While it appears to make him seem pathological and perhaps a bit demented, Bruce’s trip down memory lane includes his first night, ripped directly from Frank Miller and David Mazzucchelli’s Batman: Year One.

The younger Bruce delivers a beating to his doppelganger as he leads him back down the hole to the Batcave, reminding Bruce of why he’s doing what he’s doing.  In the end Batman finally “gets it.”  In a beautiful moment, despite the fact that he has to bury his younger self, he sees that three people died in Crime Alley that night, as the Batman was born.  It’s a nice acknowledgement to the belief that Batman is the real person and Bruce Wayne is the mask that he wears during the day.

The issue issues wraps up with a very human moment as he takes Leslie Thompkins out to dinner (she’s not really dead), and the story then recalls the famous “There is No Hope in Crime Alley.”  Bruce manages to seem like a real person and not simply the grim and determined Batman, maybe there’s a bit of that little boy left after all…..

This is easily the best issue of Tomasi’s run.  This issue not only brings the arc together, but provides a very nice exploration of who Batman is and why he does what he does.  Illustrating that Bruce Wayne was also a victim in Crime Alley is an insightful explanation of Batman’s character, one that most fans assume, but one that may not be obvious to everyone.  It’s an interesting statement, rarely is the costumed identity the real person.  Batman is unique, in this way.

Showing how much Batman cares about the success of his mission is hugely impactful.  The fact that he tracks the murder count in Gotham year to year is an interesting detail.

Revisiting certain elements of Year One is a fun trip.  But, Tomasi also goes inside Batman to reveal some emotions that may not have been obvious in the original.  The most significant aspect though, is that Tomasi manages to humanize Bruce when he takes Leslie Thompkins out to dinner.  It’s such a regular life moment and it reveals that not all of Bruce’s humanity is gone, there’s still a bit of that little boy left to temper the grim Dark Knight.

Nary a negative to be found, this issue brings everything together and makes a clear and concise statement about Batman’s character.

This story arc leading up to the historic Detective Comics #1000 has been a bit of a roller coaster.  However, this issue brings everything together in a satisfying and meaningful way.  Tomasi manages to show Batman at his most pathological, but also at his most human all while paying tribute to the origin of the character who debuted 80 years ago.  While this arc is understood when read all together, this issue is most satisfying all by itself.