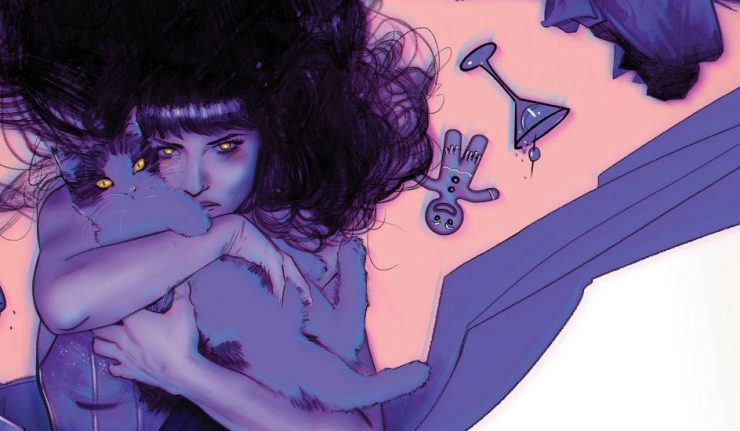 Izzy and the other women get together to try and sort out their powers and to convince Nadiya the one skeptic that this is all real.  The only time they can find is during a dinner party Aaron springs on Izzy as Aaron’s boss, August Kelly.  Aaron is keen to impress him that the plan is going fine and that the women have settled in to a normal domestic existence.

At the party, Damina figures out there’s someone hidden in the house, and Izzy tries her best to find this person, but with no luck.  In the kitchen the girls start practicing their magic and draw Aaron’s attention and ire.  He bursts in, unwilling to listen to Izzy’s half-hearted attempt at explaining the fire!  Aaron’s anger is echoed in August’s decision to try and kill the women.  The women fight back exposing their “mother” in the secret compartment, and nothing will ever be the same.

While surprising, it’s very satisfying to see the women figure out what they can do with their magic.  No longer in darkness, they begin to see what’s really going on, even if they haven’t figured it all out yet.  There’s an element of fun and a bit of trepidation as the women do show some concern at what they are able do.  It’s the same for the reader, these are supposedly evil witches being unleashed here, and it’s a mixed bag of emotions.  You don’t really want to see these women go full out evil.  It’s more interesting to see them discover their powers and try and figure out who they are as opposed to simply what they are determining their attitude towards the world.

Aaron continues to be a complex character.  He’s so concerned that his plan will work and doesn’t want August to resort to his “hard reboot” (killing them) that it continues to suggest that Aaron may have more going on in his head and heart about Izzy.

Jeannie’s bottle gets a little bit of attention which continues to pique one’s interest well.

The witches have been pent up for so long it’s easy to believe they will go full out against Aaron and the other men.  I fear this slightly, because so far the rest of the series has been so measured and subtle at times, a more complex response would be more fitting.

With this issue, the series is poised to head in a different direction as the women have learned what they can do and are not happy with their station in life.  It’s been a slow reveal so far, but the witches will certainly take it directly to their “captors.”  How they do it remains to be seen, but hopefully they will not succumb to stereotypes and cliches.