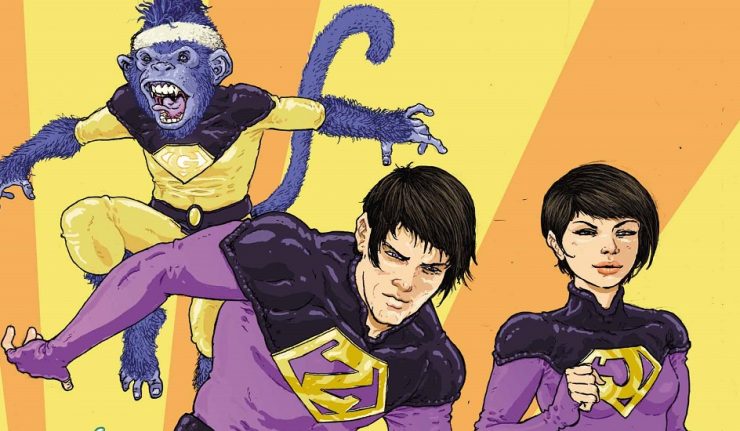 The Scrambler escapes jail and finds himself with a group of other wrongdoers that might make him wish he hadn’t.  Meanwhile, the Morris High School trip to the planetarium is instead going to the prison. It’s time for the Wonder Twins to learn the ins and outs of the U.S. prison system.  Luckily, they get to meet a hero with a little more experience: Beast Boy!

If prison is a foreign concept, would we approve of our system today? Mark Russell aims to shed light on the issue through Wonder Twins #2 and wholeheartedly succeeds thanks to the rest of his team and the details.  As the issue opens showing the Scrambler in a brown, drab cell wondering how those living conditions could possibly be legal.  Once again the crux of the issue lies in its details.  Dave Sharpe’s excellent lettering adds details like the “Lex Berry” juice box and the “Theory of Justice” book to flesh out the pervasive injustice that Russell is trying to illuminate. Byrne’s flat background colors contrast well with the dynamic facial expressions and excellent use of symmetry.  The prisoner and the policeman don’t look so different when drawn from that perspective.  They stare at each other and against the flat, brown, wall behind them, they are both human. The only difference is that one made some mistakes and is now in a cell under subhuman conditions.  It emphasizes the point Russell’s trying to make even further: This is not right.

Russell’s real storytelling opportunity begins, however, when Zan and Jayna take a field trip to that same prison.  The Wonder Twins are essentially a blank slate of fresh perspective that can be applied to any angle, problem, issue, or decision.  Russell brilliantly uses the Wonder Twins to answer the question, If [insert institution, practice, belief, etc.] were introduced to someone completely unfamiliar with the concept, how would they feel about it?  Last week, the topic of choice was High School, but this week, its the prison system, and Russell masterfully adds fresh perspective.  As the Wonder Twins are touring the prison and seeing the prisoners be put to work for no little to no pay, Jayna challenges the tour guide by asking her smart, intelligent questions; questions that we should be asking ourselves.  This, of course, gets her kicked out as challenging institutionalized practices often does.

These challenging viewpoints are then contrasted with the viewpoints of another young hero: Beast Boy.  He has largely given into the status quo, which can be seen as he is depicted commercializing his hero status by shooting an advertisement for the product Fruity Pies.  The commercial, while largely for comedic effect, is still fully fleshed out with a hilarious villain Jack O’Bin (shout out to any French Revolution fans) and includes bright, bold, and dynamic coloring and lettering from Byrne and Sharpe.  The best part about that scene is that its not too far off from the Snickers ads that have been running in most DC comics.  People might buy that as a real advertisement if they don’t realize Fruity Pies aren’t actually a thing, which shows that Russell, Byrne, and Sharpe are truly bringing these characters to life.  Often comics suck the reader into their world, allowing them to get lost in the fantasy and spectacle.  Russell does the unthinkable and brings his characters into our world.

Despite this being a 24-page comic, Russell does a thorough job of at least mentioning the problems with today’s prison system such as the subhuman treatment of prisoners, the underpaid workers, the cycle that many prisoners get sucked into despite their best efforts to do good, and more.  His primary message, however, is that villains are people too, and nobody exemplifies that more than Baron Nightblood and the League of Annoyance.  Pitched as a farm system for the Legion of Doom, the League of Annoyance serves to do just that: annoy.  We see a team meeting where the League is pitching ideas in an abandoned office about how to annoy the Justice League, and one can’t help but laugh.  But then we meet Baron Nightblood, a villain that wants something more for himself and is set upon breaking our hearts.

He only wants to stay sober, after all, but the cronies he is forced to associate with because of societal pressures need his abilities for villainy.  The Baron is pressured into biting people once again as Zan and Jayna have an important conversation about the prison system that becomes all-too-real after they put their first villain away.  Throughout the whole fight, Baron Nightblood is trying to explain how he wants to be better, but no one will let him.  Its a plight many prisoners are trying to make but society is refusing to hear.  The truth is the Baron Nightblood was defeated before he even thought about committing a crime, and Zan and Jayna are just starting to see that.  With no place to put him, Zan and Jayna bring the Baron to the same Lexicon holding center they visited earlier, and neither of them feel good about it.  The Baron is held in a cold, barren cell until he’s “ready” for his arraignment.  When the Wonder Twins return the next day and find that Baron Nightblood was put in the drunk tank and surrounded by all of his vices due to overcrowding, they’re wrought with guilt, and the reader is left wondering what could have been done.

After all, this is how prisons have always been.  There’s no point in making things look and appear nice for criminals.  If the reader takes a moment to look back and reflect, however, they may find that almost every panel the Scrambler or Baron Nightblood are in have those same, drab prison colors.  Whether it be the table and cabinets in the League of Annoyance H.Q, the empty gray parking lot in front of the rustic brown steakhouse where Baron Nightblood is about to bite someone, or the cold, red brick wall the Baron sees right before he ends up back in jail, the prison is everywhere for these individuals.  Society is the prison, and sure it may sound preachy, but that doesn’t make it less true.  It’s easy to refer to the Scrambler and Baron Nightblood as villains, criminals, and wrongdoers, but no one ever refers to them as people.  Maybe its time that we start.

Mark Russell told a great story in Wonder Twins #2 that highlights some of the injustice in our society.  The issue accomplished everything it set out to do and say, with a remarkable attention to detail and to the subject matter.  This does beg the question, however, is this a Wonder Twins story?  This comic says a number of things that need to be said, but in saying them, do Zan and Jayna have room to grow as characters, or are they just there for the fresh perspective?  At the moment, the answer is unclear, but its something to watch out for.

In Wonder Twins #2, Mark Russell, Stephen Byrne and Dave Sharpe use Zan and Jayna’s fresh perspective to make important and insightful commentary on the prison institution.  It’s the comedy, wit, and political commentary of Last Week Tonight nicely packaged in a superhero comic in order to inform as well as entertain.