FLASH-FORWARD – In 2040, Mia and William infiltrate The Glades to find Felicity and uncover more information about the conspiracy to destroy Star City; Mia’s childhood is revealed in flashbacks and what led her to take residence in Star City.

All I can say for starters is…wow. The revelations uncovered in this episode are shocking in some regards but thankful in others. A lot to cover, so I’ll try to be as concise as I can. 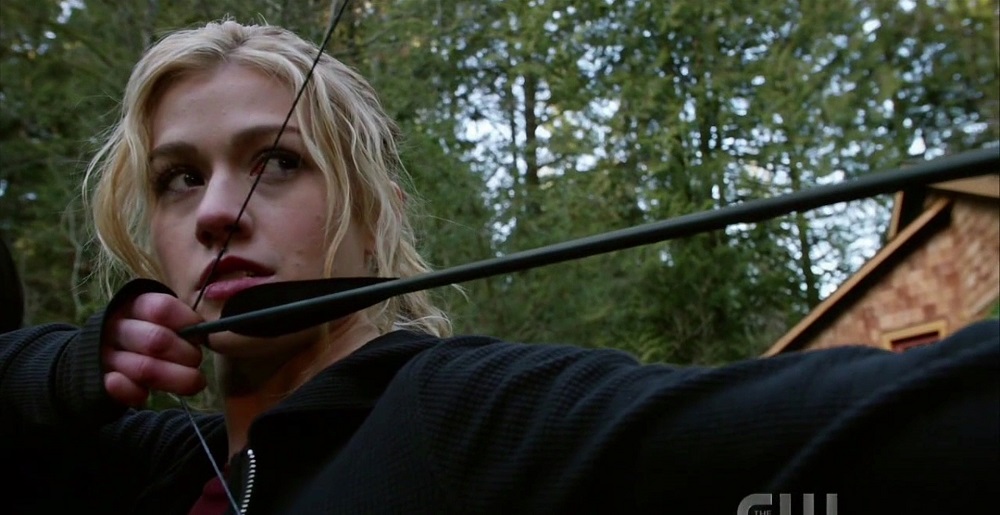 As to the mysterious progeny of Oliver Queen and Felicity Smoak, Mia is definitely her father’s daughter (though she detests the notion of being someone’s assistant as much as Felicity did in season two). The flashback was needed to establish Mia’s validity and Oliver’s noticeable absence from her upbringing. Kudos to the writers in bringing back Nyssa Al Ghul, played by the lovely Katrina Hall; it was the perfect and only explanation as to how Mia can fight so much like her father, and as perfect as when she receives her bow. The Lazarus Pit obviously agrees with her. Felicity recruiting her to train her daughter comes across as both necessary and generational; after all, The League of Assassins’s own Talia – Nyssa’s sister – trained Yao Fei, who, in turn, trained Shado, who would ultimately train Oliver on the island. Kat has amazing fight choreography, and her chemistry with Emily is spot on both in good times and bad. It was necessary also to get across how her mother was secretly still playing vigilante which contradicts her forbidding Mia from jeopardizing their safety by leaving the town they were residing in.

Further, it was important to show how her perceptions of vigilantism in general were being twisted by propaganda in spite of her knowing about Team Arrow. Having her hatred of vigilantes tied in to her disgust at her mother’s hypocrisy was brilliant. It explains a lot of her bitterness and distrust towards everyone, and extends to Connor after his secret alliance was revealed. Even when her mother is found, that bitterness is still there and Kat convincingly shows a hint of jealousy at Felicity’s interactions with older stepbrother, William. This is a young woman who feels betrayed by the one parent she had in her life, and that greatly affects her views on the world and her father’s legacy. For the duration of the episode, Mia only allied herself with Team Arrow out of necessity, and it was necessary for realism’s sake that her viewpoints weren’t completely turned around until the long-overdue heart-to-heart. 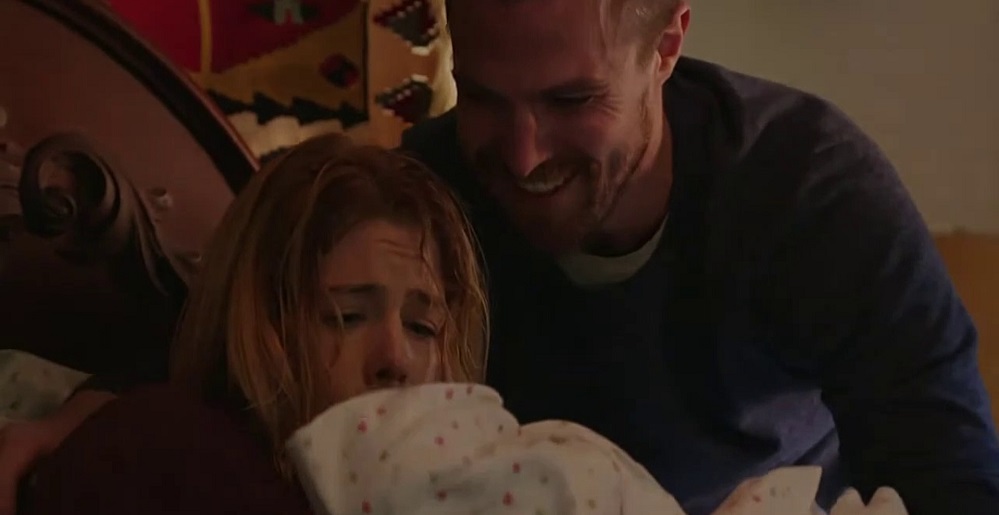 Now on to future Felicity: Emily does a great job in eliminating present-Felicity’s hyperactive nature and her rapid-fire delivery. She’s now a woman in her forties (?) and grounded. I find that she channeled a little of Susanna Thompson’s portrayal of Oliver’s mother, Moira, in her slow-and-steady monologues. In many ways, that’s what she has ultimately become: A mother with secrets which she feels were necessary to protect her family. She even made her daughter’s very existence a secret, even from her extended family in Team Arrow. There are hints of the old Felicity, though, especially when she’s trying to brainstorm William’s “type” while wading through the crowd at that launch party. But it was the final resolution with her daughter that these two shine. The lack of a hug implies there is still much rebuilding of trust needed between Mia and Felicity, which feels real. With Felicity reunited with Mia comes more questions: What happened to Oliver? And why is that on her, as she claims? 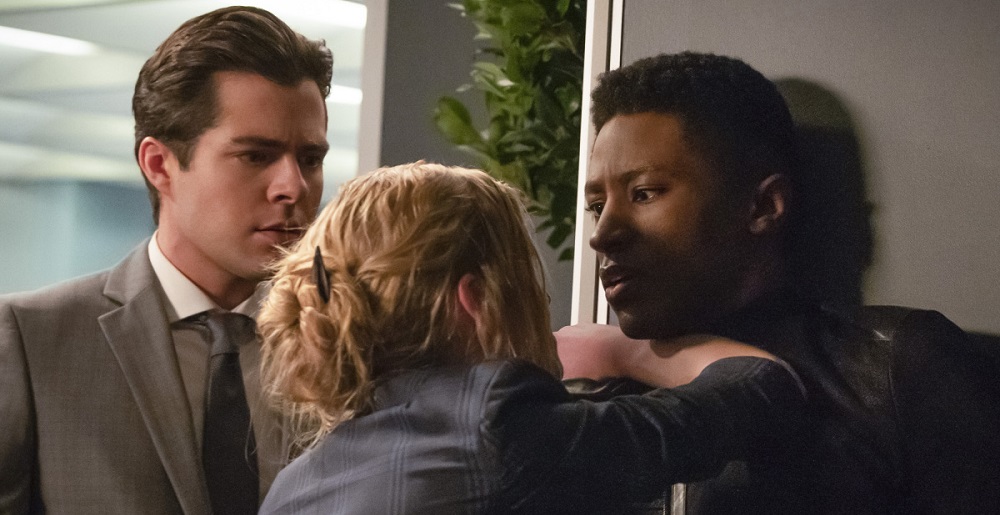 The interaction of Mia, William, and Connor also engages the audience. The brother-sister dynamic of William and Mia can be likened to that of Kim Possible and Ron Stoppable (if they were siblings, of course). What has made this flash-forward approach this season work is playing against type; Adult William was expected by audiences in the premiere episode and episode two to undergo the same odyssey his dad went on and become a skilled archer under Roy’s training. And yet, here we have the elder brother letting his younger sister, the actual skilled archer and fighter, take the lead. In many ways they make up both halves of Ollie (the playboy and the warrior), while William takes two-thirds more from Felicity re tech smarts. It’s in the office sequences we learn more about William’s current life as a CEO himself living under a different name. This gender role reversal is pushed further in that sequence with William playing up the sass with big bad Kevin Dale while Mia obtains the DNA swab for Connor’s tech. As for Connor himself, more surprises with his big reveal as an undercover agent. The chemistry between he and Mia suggests there was an infatuation that took place in their dynamic. Clearly he took Diggle’s path in life and abandoned his biological father’s path.

Nice Marvel namedrop btw, again pushing forth the notion that the MCU exists in DC as characters of fiction. While this is nine years off from his actual appearance as the new Green Arrow in DC Legends of Tomorrow, the fact that he’s in a relationship (?) with the daughter of Oliver Queen brings possibilities to mind. Does something happen to Mia that pushes Connor in that direction? The fact that everyone believes Oliver is dead until he appears (ahem) dis-armed but alive in that episode would Connor more personal reasons to distrust this so-called hero. 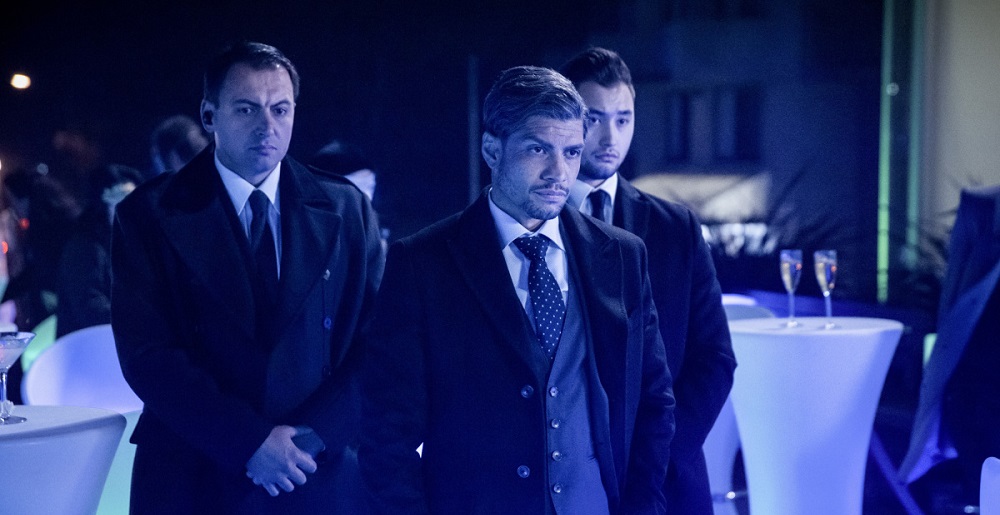 What works in this episode is the handling of both now-mayor Rene Ramirez and The Glades. All the way back to season one, Star(ling) City was the pinnacle of the elite and wealthy, while The Glades were its ugly shadow. A breeding ground of crime, poverty, and desolation. Oliver’s Sherwood Forest outside of King John’s castle. Forty years later, the dynamic has undergone a seismic 180, with the decadence of Star City now in decay while The Glades stand as a fortified metropolis. It explains why there is so much reluctance on Team Arrow’s part to enter what was once their stomping grounds. That visual image of those high walls convey a height of paranoia and segregation. The city itself becomes a character; after decades of suffering at the hands of corrupt officials, seemingly-ignorant vigilantes, and psychotic maniacs, The Glades have had enough and established itself as its own district. It basically left Star City to rot, turning the tables on what its citizens thought were their oppressors. The kind of people who Oliver once described as those “that see nothing wrong with raising themselves up by stepping on other people’s throats.”

It’s evolution speaks to Rene’s soul; he wanted better for both his daughter and the community, and he made that happen. The only problem is, as his former teammates tell him in their intervention, he compromised himself. He doesn’t see himself as the one having his foot on Star City’s throat only through both self-deception and the deception of his partner-in-crime Kevin Dale. He doesn’t realize how much he’s betraying Oliver’s memory, nor how he turned his back on his former teammates, especially Dinah. The chemistry between them indicates that a relationship had taken place prior to these events, and it would be interesting to see that in future episodes. The conversation between Rene and Zoe is key, and the writers were smart in waiting this long in the season for them to lay their cards on the table.

Rick and Andrea work well together as father and daughter, and I see parallels between their relationship and that of Quentin and his girls regarding their career choices. It’s only his daughter’s admiration of the man he once was that wakes Rene up to the real bigger picture. The notion of “one battle doesn’t win a war” best describes the resolution, for although Rene assists Team Arrow, he’s still forced to uphold the law and put bounties on their heads to maintain his cover. This is an interesting take on when Oliver, in the comics, became mayor, and put a reward for the capture of Green Arrow to avoid exposure (though the goatee was very telling, Ollie, TBH). The notion also carries over to Dale’s Plan B, designed to eliminate vigilantes permanently somehow. Having Rene continuously walk the line works; he’s swapped his hockey mask for The Mayor’s Office as cover. Still, the writing for his conversation with Dale leaves open the possibility that he may still turn on the team, his dialogue conveyed by Rick with that hint of duality in his delivery. The fact that he doesn’t use his authority to have Dale arrested for lying about evacuation plans leaves one to question just how deep in he is. 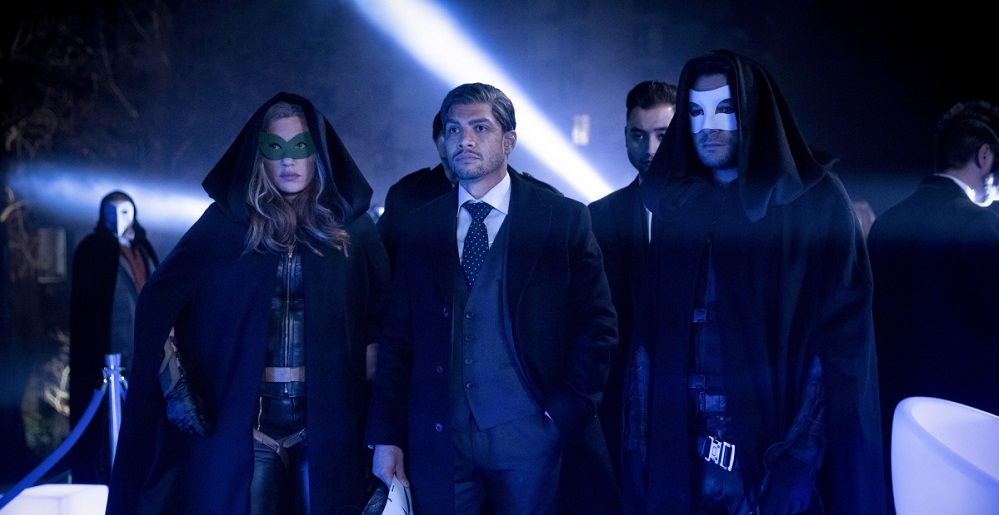 I’m having problems finding any negatives this week aside from the unexplained choice of costumes at this rooftop party. Why the masks and hooded capes?

I give this a solid 5 out of 5. It’s cool seeing Beth Schwartz as co-writer in light of her recent negotiations with Warner Bros. post-Arrow. Mia got a strong storyline boost and amazing fight sequence reminiscent of one of Stephen’s classic office brawls. The chemistry between Kat and Emily is spot on, and a glimmer of hope for redemption of Mayor Ramirez. I’m anxious to see what role the Archer program had in the death of Oliver Queen. Looking good everyone. See you next week!

Super Sons and Daughters of the DC Universe