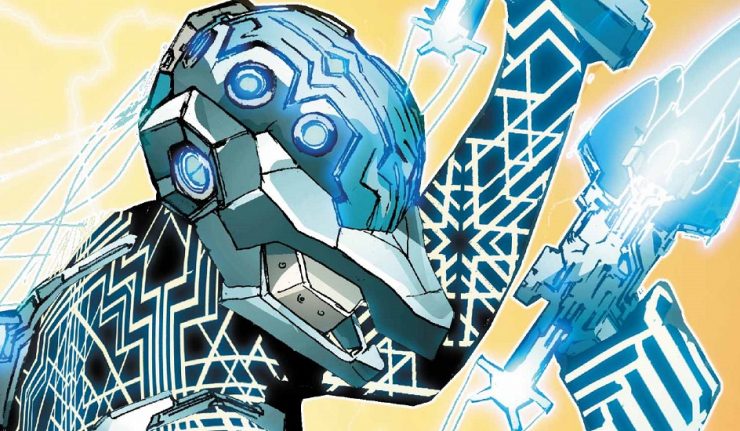 After the Inceptor’s death, the Electric Warriors decide the time to act is now.  The people need to know the lies that lay the foundation of this intergalactic compromise, but Firestorm isn’t going to sit idly by while some naive fools undermine the system he’s spent decades creating.  Witness the ultimate confrontation in Electric Warriors #5!

Who gets to decide for the greater good?

Electric Warriors sits at a unique place within the DC mythos.  Taking place after the events of Jack Kirby’s O.M.A.C and Kamandi, but before the events of Legion of Superheroes, Electric Warriors attempts to partially fill the very large gap between the two with a new and dynamic universe.  There are both subtle and overt nods to the past and future, but this is very much its own era meant to entertain, educate, and add to the DC timeline.  The result is a miniseries experienced readers of the DC universe will recognize as a scaffold of connective tissue, bridging the past and future while building its own present.  New readers will see a familiar dystopian future ruled by the laws of interplanetary gladiator-like combat with some unique twists.

Carefully crafted by Steve Orlando, Javi Fernandez, Travel Foreman and Richard Friend, Hi-Fi, and Travis Lanham, Electric Warriors #5 sets up the final confrontation that could change the shape of the universe.  By killing the Inceptor, Firestorm has forced the Electric Warriors’ hand.  Its time for a new generation of unlikely heroes to stand up to the injustice the current rules of governance perpetuate.

The issue with phenomenal work from Javi Fernandez who seamlessly blends his art style with the rest of the book, while still making these first two pages stand out.  There are a lot of digital, energy-based, and holographic effects in the first two pages, and Fernandez add texture to those pages in a way few artists can.  We can almost hear the buzzing of the holograms, feel the energy coursing through Firestorm’s veins and witness the Gilded flicker out of existence before our very eyes.  Whatever the reason was for including a different artist to begin the book, these first two pages should not be taken for granted.  They set up Firestorms anger and imminent loss of control, and Fernandez’s art goes a long way towards showing that.

The idea of control, in fact, is a primary motivation in this issue.  Whether it be who has it, who doesn’t have it, fighting for it, regaining it, or the fear of losing it, control drives most characters’ actions.  We’re given Firestorm’s perspective as he feels the authority he’s possessed for centuries slipping through his fingers, as well as the Electric Warriors’ perspectives as hungry young heroes willing to risk their lives for the truth and justice fought for by idolized figures from the past.  Each warrior is still acquiring their own set of principles, but they’ve come a long way since they were chosen.  Nevertheless, the crowd yearns for blood as two more warriors step up to battle, this time for a shape-shifting vaccine template.

War cry leads the charge in exposing the truth.  He is unashamed to admit his shortcomings, but pushes on anyways for what he believes is right.  War cry is living up to potential as a leader and a hero, and the other Electric Warriors come into their own as well.  War Cry’s comrades will stand by him until the end.  They step onto the field as one, using their powers to captivate the audience and give themselves a platform on which to speak.  Everybody has a lot to take in. The truth is jarring and the state of existence they’re use to has not always been suffering.  Is the uncertainty of something new worth the potential cost?  Can we trust half the truth?  These are large questions this miniseries proposes.  Truth subtly lays out bits and pieces of truths through its pages and measures their impact on the universe.

Even Firestorm, the big bad, the mastermind this entire abhorrent system of government, is riddled with half-truths and quasi-noble intentions as the Firestorm Amalgamation is revealed.  It’s a twist no one saw coming that will blow you away while revealing that even the most powerful can be silenced, and that the quest for order can drown out a sense of morality.  Orlando has really fleshed out the power dynamics of the universe over the past 5 issues.  Once mighty warrior races are now depleted of resources while new planets have emerged to the forefront of civilization.  Foreman and Friend work in tandem to make Covenant look bright and vibrant to those watching while portraying a grim reality in the eyes of the warriors who have come to face it.  An excellent collaboration by a duo that makes the epic Firestorm reveal stand out.

We owe Hi-Fi, however, for the books flare, pop, and style.  The color-work allowed by this book is braving new territories with Deep Dweller’s dazzling gradient word balloons and the brilliant lime-green energy radiating from Firestorm and Dominator.  That being said, Hi-Fi does a great job knowing when to dim the shining light of battle.  The muted, blue-gray tones of the Electric Warriors facing their truths are equally stunning.  Its a magnificent art team that is bring a breathtaking aesthetic to a shamefully underread miniseries.

The final issue awaits as do some answers to DC’s past and present.  It’s not too late to hop aboard an exciting hidden gem before it reaches its last issue.  Whether you’re familiar with the mythos surrounding the era or just want some good ol’fashioned sci-fi fun, Electric Warriors has something to enjoy.

At certain points in the issue, things start to get a little sluggish as the situation becomes overcrowded with jargon and explanation.  At points I felt like the book lost sight of the very characters that keep it moving forward.  War Cry has two character-defining moments in this issue, but while both speeches were great, neither really contained a remarkable emotional beat.  This series on its own is a lot to take in because of how new everything is, and some of the more dense pages didn’t necessarily do it any favors.