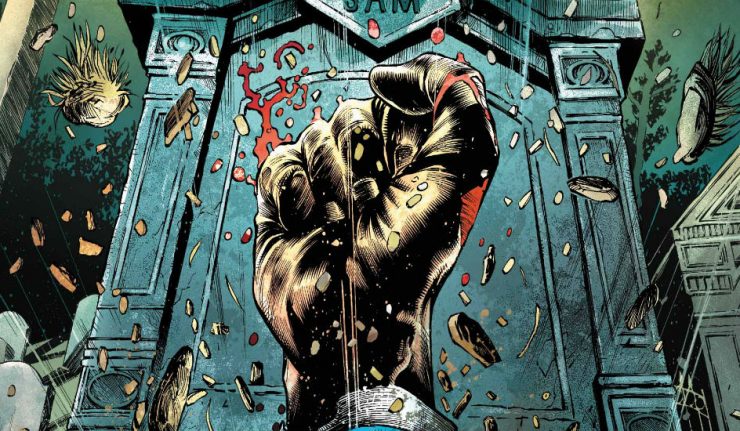 One of the unintended consequences about a series like this is that it makes one consider the differences between terrorism and fighting for one’s freedom.  The opening salvo by the Freedom Fighters, while clearly depicted as a good versus evil perspective, it doesn’t take much to imagine our own world and the actions of those who see our country as evil.  Perhaps, it simply boils down to innocent lives….

On Nazi graduation day, the Freedom Fighters blow up Mount Razimore just as Adolf, Jr. is giving the commencement speech.  He survives, but the FF makes a real statement.  Afterwards, we get a little bit of a look at the FF as they decompress from this mission.

In the Heartland the Extra-dimensional Realm of Ideas, Uncle Sam finally breaks free from his earthbound confines to walk free again in the world.  On the way he encounters the graves of Johnny Canuck, Hispania, Britannia and other defeated National Spirits.  He finally makes his way to our world and saves a young man from Nazi oppression.

Meanwhile, Adolph, Jr. rages at his son for being ineffectual, and Addie responds with his own observations of his father’s incompetence.

When Uncle Sam mentions the “spirits” of other countries, it brings up the notion of Nationalism and how it can be used as a positive influence in the world and not simply misguided hubris.  Sam speaks of Johnny Canuck and Hispania as lost friends- and Britannia!  A foe, then a friend- there’s something deep brewing here that is greater than a simple super-hero story.  Citizens of every country have a spirit, a feeling of belonging, a feeling of history that creates a connection to one another.  Uncle Sam embodies the notion of freedom as well.  Freedom of speech, etc…just check your Bill of Rights.

A bit of Doll Woman’s past is revealed as she remembers the death of Doll Man while speaking with the Human Bomb.  Doll Man in this scenario is a man named John.  While it’s clear that these are new iterations of classic characters, this issue seems to indicate that there could be a generation in between the Quality Comics versions and the current ones if the original classic versions exist at all on this world.  Bomb is able to express his fears as well, it can’t be easy blowing up everything one touches.

The terrorist (!) attack by the FF at the beginning is a bit of a slow start, but once the issue gets to Doll Woman and Human Bomb’s interaction it really takes off.  The opening sequence conjures up a lot of questions in the modern mind.

This book is unintentionally raising lots of questions about the nature of Freedom and Nationalism and how it relates to terrorism.  It effectively proposes a place for constructive Nationalism and its relationship to the aforementioned Freedom.  Along with some intriguing world building and characterization, ti’s pretty darn good as a super-hero comic too!  Or maybe it’s intentional….