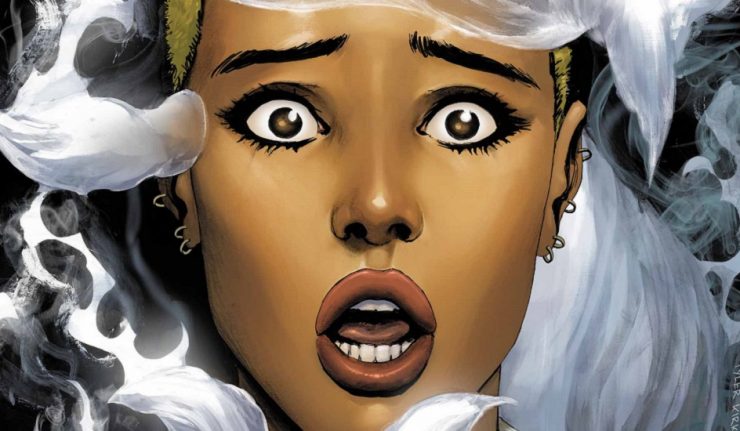 “Sisters Share Honor!  But I don’t feel like sharing.  I’ll take what’s yours and make it mine! – Smoke…..Honor and Talia’s newest sister.
Talia Al Ghul gives her Leviathan assassins the word “go!” and in the silence, all purgatory breaks loose as The Silencer and her “brother” Raze (the one who was raised to be unseen) go into a water stronghold to wipe out any genetic specimens from Ras Al Ghul’s experimentation in Dr. Splicer’s lab.  Knowing this execution is about to be a very big “family affair” Honor has some serious choices to make.  Meanwhile in Charleston, SC, Honor’s husband Blake is tearing up the yard trying to get to the bottom of the security net that surrounds their home.  And he is visited by possible agents of the Leviathan that advise Blake to just things go!  However, back at the lab, Honor meets another Sister (Smoke) who can phase through solid objects (in this case Raze’s armor and his heart).  Given that the majority of her time was spent confined in this lab, Smoke is about to assimilate into Honor’s life.  This is one dysfunctional family!

Honor, despite her hiding that she really knows who she is and is simply biding time to get back to her family, is in the middle of a “mess”.  Fighting to get back to her family, she finds she is genetically part of the Al Ghul clan, as she and Talia are sisters.  Her “brother” Raze is a fierce killing machine who has no heart (and really doesn’t now in this issue), and her new sister Smoke is about to take her family as she declares that Honor didn’t fight for it like she should have and let it slip away.  Marion and Abnett didn’t make it easy on Honor and despite being an assassin, what do you do when you face a sister with “smoke” powers.  While Honor can’t get a hold of things, it is fortunate for readers like ourselves that we can get a hold of this issue!  I love the complications and to have three Al Ghul “sisters”.  This has got to hit Batman in the face at some point!  Sandy Floreau draws a beautiful Talia and the effort is there for Smoke as well!  This cover art is perfect!

No negatives this issue as the switch from battle to family life and back to battle is perfect.  The rhythm of the story is spot on and the only negative is that the issue runs out!

No wonder Talia wants everyone gone!  Geesh – these new sisters are something to behold.  Cue the Brady Bunch Theme and an utterance of “Marcia, Marcia, Marcia”!  I think we have not heard the last of these three sisters!  And who are these people talking to Blake….warning him to back off!  Batman is going to have to come into this at some point to figure it all out!