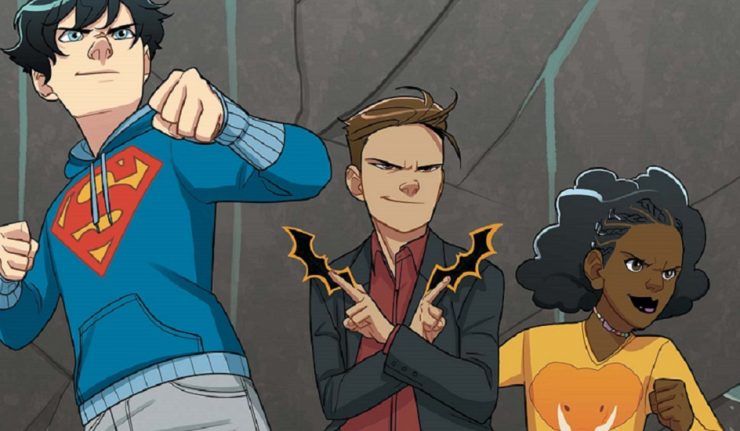 Jon Kent and Damian Wayne are opposite in every way except one—they are the sons of the World’s Greatest Heroes! To uncover a global conspiracy, this unlikely dynamic duo will need to learn to trust each other and work together to save the Earth. But who is the mysterious Candace? And what secrets does she hold that could be the key to everything?

The polar ice caps have nearly melted away, causing devastation to coastal cities. Erratic, deadly weather forces everyone inland, tearing families apart. Earth is facing its greatest crisis—and Superman and Batman are nowhere to be found.

From New York Times bestselling author Ridley Pearson (Kingdom Keepers) and artist Ile Gonzalez comes the first original graphic novel in an epic three-part series that follows the Super Sons of Superman and Batman as they struggle to find their place in a rapidly changing world!

When I first picked up this book, I wasn’t sure what exactly to expect, as it the very first title of DC’s imprint for kids from ages 8-12, DC Zoom. I am a big fan of Peter J. Tomasi’s Super Sons, and Jon and Damian on the cover looked decidedly different from how they appear in those books. So, I was apprehensive that however good this story might be, it would pale in comparison to those books.

So, I was a bit relieved to see a quote from Tomasi on the very first page praising the book. So, I moved on and read the story. After finishing it, I decided that I actually quite enjoyed it. If forced to compare the two, I would have to admit that I prefer Tomasi’s version, but they are two vastly different things and comparing them does a disservice to both.

The world of this story is very much different from the main DCU. Yes, this world has some characters and places we recognize, but it is very different in a lot of ways. For one thing, it seems to be set a few years in the future, relative to the real world. Global warming has caused major flooding that has devastated many cities around the world. The United States is known as Coleumbria in this world, and most of the story takes place in a city called Wyndemere, which seems to be unique to this world.

And the most significant changes to the world are the differences in some of the characters. For example, the boys are nearly the same age instead of three years apart. However, the most dramatic changes are to the character of Damian.

In this version, Damian has a much different physical appearance than in the DCU. He is taller, has different facial features, and brown hair. Furthermore, while it appears that he has had some training in how to fight, it doesn’t appear that he has been trained as an assassin. Also, he has not taken. And for some reason, prefers to go by “Ian” rather than Damian. In fact, given the differences between Ian and the DCU’s Damian, I have to wonder if his mother was someone other than Talia Al Ghul on this Earth.

However, it is best not to dwell on these differences, but to view this story as its own thing. And as such, it actually holds up pretty well. In fact, it being separate from the DCU does benefit the story in some ways.

For example, Lois Lane is hospitalized with an illness during the story. If this happened in the main DCU, you could safely assume that her life wasn’t in peril. But this story is totally unconnected to any other DC continuity, so we have no guarantees she will survive.

Despite the title being Super Sons, the core group of the book is a quartet rather than a duo. However, Candace and Tilly are neither sons, nor related to any DC hero… as far as we know. Tilly is the team’s computer and mechanical wizard, while Candace is something of a mystery, who appears to be foreign royalty and has some sort of precognitive abilities.

In fact Candace seems to be at least as much of a central character, if not more so than the two titular boys. However, I think her and Tilly are fine additions to the team. And they give young girls characters that they might identify with more easily, widening the story’s appeal to a broader audience.

The ways in which this book differs from the main DCU may be a major put off for anyone hoping for more of the Super Sons they are used to. Especially if you are a big fan of Damian Wayne and don’t want to see him interpreted differently. If so, then I’m afraid this book isn’t for you. However, if you can appreciate an alternate take on the characters and the mythos, then it is makes for a quite enjoyable story.

Some of the minor characters’ names are based on puns that might have you rolling your eyes: G. Reed, Para Sol, Dr. Cray Ving, and Sir Reale. However, given that the target audience for the book is children in Grades 3 to 7, this is a forgivable offence.

Super Sons: The Polarshield Project is a book that children will enjoy whether or not they are familiar with DC’s superheroes already. In fact, it could serve as a good introduction to superhero comics for kids. Even as an adult, I found it a fun read and a great start to the DC Zoom line.