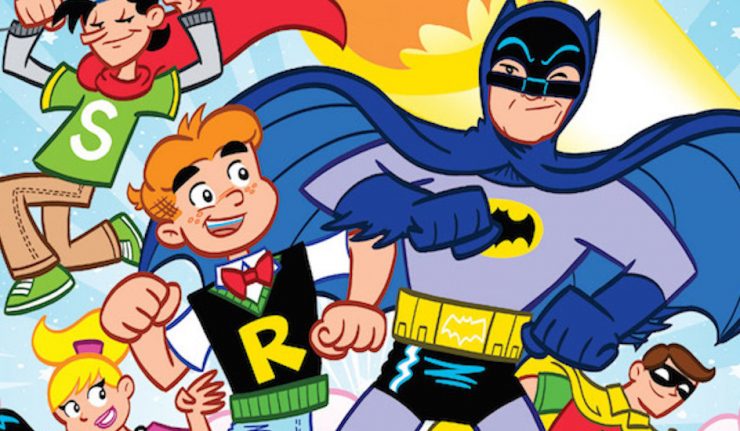 When Gotham’s most diabolical decide to set up their shop in Riverdale, Batman responds to a desperate call for help from Veronica via Dilton by sending Dick Grayson and Barbara Gordon undercover. But, can Batgirl and the Boy Wonder stop the combined might of the Bat-family’s greatest enemies with the help of Archie and his friends? It’s going to take every hero willing to answer the call if there’s any hope.

The story opens with Poison Ivy attacking the 1966 Fair and Batman and Robin are on the scene to shut her down fast. But, why are Book Worm and Foot Note bragging that they let her out so they can steal the book of the future? And, how will all of this lead to Batman’s rogues targeting Riverdale?

The positives reveal themselves in a series of sequential events. We start with the dynamic duo, and soon Archie and the gang are mixed up in hijinks.

Robin’s self-consciousness is clearly conspicuous. When a flirty line from Batman works too well on Ivy she suggests feeding Robin to one of her plants so that she and Batman can run off together. Batman’s response is to tell Robin to fire the Bat-Beam, which he does while saying, “Why do they always want to kill me?”

And why are they in Riverdale? The reader already knows that Joker, Penguin, Siren, Catwoman, and the Riddler are annoyed that radio reports referred to them as colorful, maniacs who are no different than Ivy. This careless snub inspires them to attack a sleepy little town with no superheroes to defend it.

The opening scenes of Riverdale’s citizens are textbook, Archie. The jalopy on racks, but it needs to be fixed in time for the upcoming festival. Jughead will fail a test if he doesn’t study and Veronica wants to wear an inappropriate dress that Daddy-kins is sure to disapprove of, but this time Daddy is distracted. His mood shifts from angry, and then to anxious, and then rushed. Everyone is too busy to notice or listen, and the chief of police is acting just like her dad.

It’s a refreshing development to watch Veronica manipulate AV club star Dilton to help her solve what the reader knows is a crime. And this, this is what brings in the shortwave radio that reaches Batman in the Bat Cave.

When Dick Grayson and Barbara Gordon go undercover at Riverdale High, the over-the-top reactions from Archie and Veronica when the new kids walk into Mrs. Grundy’s class are priceless. But, they’re not the only ones. Joker, Riddler, Circe, and Penguin can see it all because they are watching through the two-way blackboard in Mrs. Grundy’s room. Penguin claims that he hated school and dreamed up the blueprints for the blackboard when he was nine.

Things in town are getting bad. Riddler has recruited the only criminal potential in town. Circe’s song doesn’t work on teens the same as men, but thankfully young Reggie Mantle’s greed is the perfect motivation for the Riddler’s plans.

It gets worse when Pop puts up a sign that says he is promoting Joker Burgers, he opens the door for Mr. Weatherbee and the silhouettes of Joker and Penguin can be seen. Watching Jughead try to keep his feet after discovering villains are running Pop’s is a comedy of errors.

The eventual arrival of Batman is tempered by his immediate capture. When the villains appear to have gained the upper hand for good, Robin and Batgirl dress Archie and the gang in superhero costumes. The overpowering numbers prove to be simply too much for the assembled bad guys. And Dilton the most unlikely hero turns the tables for good when he finds and disables the device controlling the minds of the parents.

My only complaint is that the story seemed to stretch from issue #4 to issue #6. But

Choosing negatives in a collection like this is like looking for the bad special effects in a Sci-Fi or horror movie. The key to enjoying a great team-up between two iconic casts known for camp and irreverent humor is to suspend your disbelief completely and imagine a world where the greatest challenge to be overcome is getting to eat a hamburger, score a date, or match literary wits with a well-read criminal.

Are there plot holes? Yes.

Do they affect the story? Maybe.

But, the benefit of enjoying lighthearted laughs is that they remove the internal editor from the equation and allow the oldest comedic gags to work some magic.

A large cast of characters familiar and obscure create a story that is a pleasure to read. The style and timing are so familiar that the old jokes mixed with new material meld into a familiar romp with some of my favorite nostalgic notables.

The fun is infectious, the characters are classic, and the whole story ends with a great big dance scene. And as the ending message suggests, “Who knows what will spring from this mighty alliance of Riverdale and Gotham?”