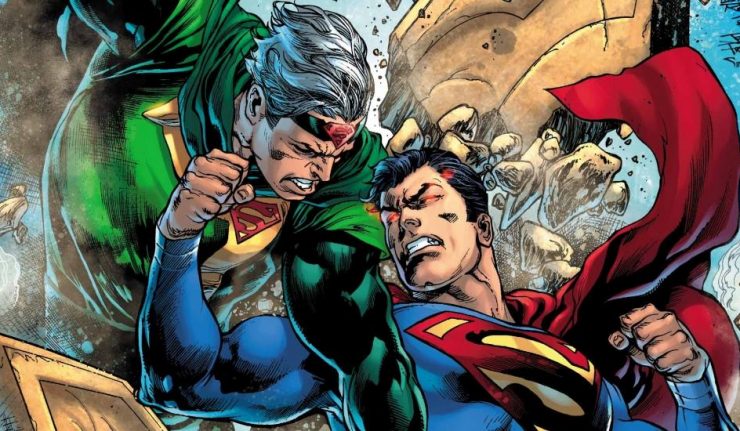 Superman and Superboy venture forth into the cosmos to stop Jor-El before he tips the galaxy into utter chaos. Also, Superman would like to have a word with his father about what happened to his son. All this and the fate of General Zod. “The Unity Saga” continues in the pages of SUPERMAN, named one of the best superhero comics of 2018 by Paste magazine!

Superboy finishes recounting his story of his lost years, explaining how he went away for three weeks, but returned home several years older. Jor-El finally manages to bring him back to the present.

There is definitely something going on with Jor-El. He has undoubtedly been through a lot, but he has seemed somewhat unstable since he was revealed to have survived Krypton’s destruction… and he seems to be getting worse. He’s also a fair bit older since we saw him last. Even though Jon has aged about six years or so while on Earth-3, his grandfather has spent more than that number years searching through time and space for him.

He seems quite agitated with Jon. Although he knows Jon was caught in a wormhole and Jor-El had to rescue him from Earth-3, he accuses Jon of running away from him. Jon reminds him, “I wanted to go home! If was going to bail on you, Grandpa, I’d have gone home! Seriously!”

“Seriously!” is exactly right. Seriously, this is not the Jor-El we know from any version of Superman’s origin story. And add to this that Superwoman, Earth-3’s Lois Lane, apparently recognizes him. Could this Jor-El in fact be Ultraman’s father from Earth-3? I have to admit, Bendis has posed us a mystery that I find intriguing.

I also like that Jon takes a moment to state that he wants to touch base with Damian, but realizes that it will have to wait until he and his father return from space, as Jon’s age would take more than a five-minute phone call to explain. It’s nice to see that although from Jon’s viewpoint, he hasn’t spoken to Damian in years, that to Damian, it’s just been a few weeks, and Jon is still concerned about his friend.

Although I mostly enjoyed the issue, I still have some issues with it. First off, last issue promised us an epic confrontation between Jon and Superwoman, his mother’s evil doppelgänger. This fight was pretty much a non-starter, as Jor-El arrives as a deus ex machina to take Jon home. This feels like a bit of a copout, and I wish we could have seen more of this teased fight.

Also, considering that Rogal Zaar supposedly hates Krypton and all things Kryptonian, he seems to have little trouble allying himself with Krypton’s criminal element. First, Jax-Ur, and not we see him attacking Jor-El’s ship alongside General Zod? And weren’t Zaar and Zod at each other’s throats last time we saw them?

I don’t know that I like a lot of the decisions Bendis is making about the direction of the Superman’s titles, especially in making Superboy older than he should be. However, Bendis is providing an entertaining tale that is fun to read, so I won’t be upset if after he is done playing in DC’s toybox, if he makes sure to leave things in the same state he found them. But for now, I am content to sit back and watch where this story is leading. 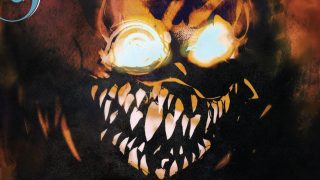