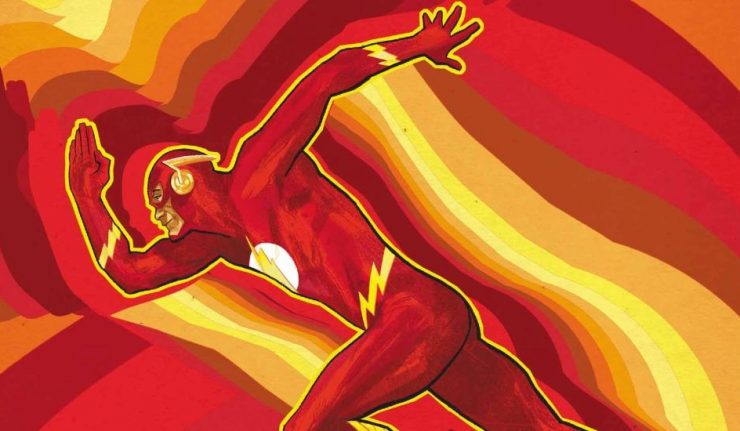 The Flash has arrived back in his home of Central City to discover something…off. The people are all acting strangely, including his friends and colleagues—but before Barry can figure out why, the entire Central City PD attacks! At last the great trick is revealed: the Trickster now rules supreme! With Iron Heights as his fun-house base of operations, Trickster plunges the entire city into madness—and the Flash is powerless to save them!

This issue starts answering a lot of the lingering questions raised in the previous issue. Primarily, we find out what the original Trickster’s overall plan is: revenge. More than anything, it seems that James Jesse is angry at Central City for forgetting his existence entirely. So, he intends to play the worst trick possible on the city possible by giving them happiness and then ripping it away from them.

The Trickster has somehow weaponized the Sage Force into forcing the people of Central City into a state of happiness, which Trickster intends on taking away from them. Luckily for the Flash, he the Speed Force makes him immune from this himself. Unfortunately, the Trickster does something just as bad – or even worse.

I have to admit, I was shocked by the ending to the issue. I didn’t think that even the worst villains in Barry’s Rogues Gallery would do something like this. Attempt to remove his powers through science or magic, maybe. Try to kill him, many have tried. But to negate his powers by dismembering his legs?

Of course, there’s numerous ways this can be undone: magic, futuristic science, or most likely it’s an illusion – yet another trick from the Trickster. Therefore, it’s doubtful Barry has permanently lost his legs…. but man, what a jolt that reveal was.

I suspect that this development is a callback to Flashpoint. No, not that Flashpoint. I mean the 1999 Elseworlds miniseries where Barry had been forced into retirement after becoming confined to a wheelchair after taking a bullet to the spine. I doubt that this is where this story is headed, but it’s a nice nod to this earlier story.

We also find out what future knowledge James Jesse wants from Commander Cold, and I thought it made perfect sense. After having been so thoroughly erased from Central City’s memory, the Trickster is now obsessed with being remembered. So, he seeks to have Cold confirm that in the 25th Century, his name is still remembered.

As always, Scott Kolins’ art is on form. I especially like the costume he has given the Trickster. It manages to convey the fact that this is a much deadlier version of the character, but still not deviate too far away from the delightful silliness of the classic costume.

Plus, I notice that Kolins has put the wings back on the Flash’s boots. This is a nice touch that has been missing from the Flash’s uniform for a while now. I know this may not seem like an important detail, but the Silver Age Flash outfit is one of the all-time great costume designs, and I think the New 52 redesign strayed a bit too far from the original concept.

There is a part of the story where Barry is marched into the Trickster’s Sage Force device and has to pretend to be happy. Barry even thinks, “Too bad it’s all a trick.” He means that the happiness itself is a trick, but there is a deeper meaning. It’s also too bad that Barry has to trick others into believing he’s happy, when he’s had so little happiness in his life in the past few years. And what little happiness he has found is either undone or overshadowed by worse problems. It would be for Barry’s life finally start getting a bit brighter overall for a change.

After an ending like that, there’s no way I’d miss catching the rest of the story. The Flash has survived through numerous extreme physical transformations throughout DC history, but I don’t think he’s ever had his legs cut off before. I can’t wait how Barry gets himself out of this situation.