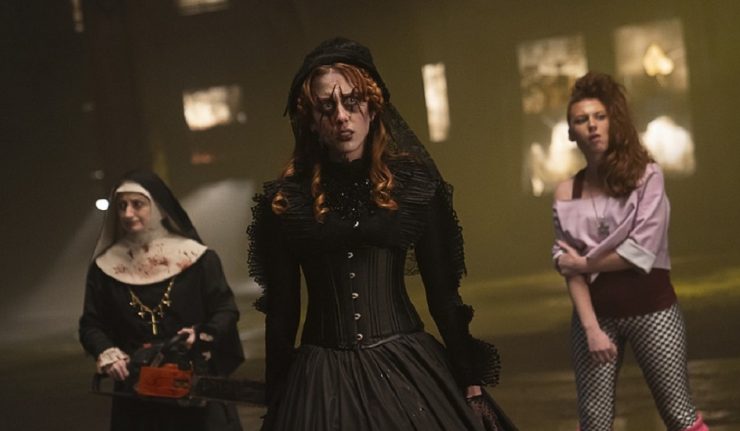 Welcome to the underground, the home for all 64 of Jane’s personalities and an expansive manifestation of her mind.  Jane is the primary and, after Karen’s removal from the surface, she is asked to return to the surface.  But Jane is tired of all of the pressures that come with being in the spotlight and wants answers from the underground instead.  Who will step into the spotlight?  Who will help Jane get the answers she’s looking for?  Will it be Robotman?  Probably not, but that won’t stop him from trying.

“All of us don’t want to go back up sometimes.”

Doom Patrol continues its streak of talking about important topics through well-crafted, intelligent, and compelling narratives, this time addressing trauma.  It’s a very sensitive topic that can be jarring and unpleasant for many, so how do you reach as many people as possible while still addressing this issue seriously and appropriately?  There is no right answer, but “Jane Patrol”accomplishes the task extremely well by knowing when to be overt and when to be subtle.  It uses visions, flashbacks, imagery, light, and sound to bring the audience up against the line without crossing it.

This issue is also a great homage to how powerful comics can be.  Grant Morrison’s Doom Patrol run gave us a taste of Jane’s underground when it goes into her complete origin. We saw some of the expansive world that inhabits Jane’s mind within the comic panels, but it was up to us to fill in most of the world for ourselves with our imagination.  “Jane Patrol” cleverly inverts this notion and does the opposite.  The episode brings the underground to life in ways many of us can’t even imagine with exquisite detail that could only could only come from someone’s mind.  It fills in the gaps for us, but leaves us to complete the picture of Jane’s past, only showing us bits and pieces of Jane’s traumatic childhood.  It isn’t difficult to figure out what happened, but we still have to put the pieces together ourselves which makes the narrative more powerful.  It’s all highlighted with unique and eye-catching comic book lettering for each personality.  It’s an element included in many of Doom Patrol’s episodes that adds a lot of flair and personality to the show.

A lot of TV shows have tried to provide insight, manifest, or comment on trauma and mental illness in the past, but “Jane Patrol” does so exceptionally well by manifesting Jane’s mind as an entire world and dropping Cliff into it.  Cliff has his own insecurities and struggles with his mental health, but Doom Patrol allows us to see Cliff reacting what he sees in Jane’s mind, things we could never see or experience.  It’s unclear how much research the writers did into depression, dissociative identity disorder, or other mental illnesses before shooting this episode, but it appears they were very thorough to a viewer who couldn’t possibly gauge how accurate things are to someone with the actual disease.  The pain and disharmony amongst the personalities is particularly striking.  Each one s truly a separate entity, a separate person with their own appearance, traits, personality, etc.  There is no room for someone to argue that these other personalities aren’t real, or are all in Jane’s head because there is not limited to the human brain.  Jane’s mind may be the place they inhabit, but they are very real, separate people, and Harry Jierjian and Marcus Dalzine help that message come through loud and clear.

Life is hard.  “Jane Patrol” owns that message loud and clear in ways that many of us could never understand.  It doesn’t sugarcoat anything, but instead shows how anyone can find a reason to keep going and keep on living, even during the hardest times.   The episode continues to embrace the impossible and allows Cliff to help Jane find that motivation.  Brendan Fraser gives an amazing performance where he gets to emote and physically perform as himself and not as Robotman, and it is a very important experience for the character.  The moment where Cliff rips his face off and owns who he is in order to get to Jane is incredibly powerful and metaphorical.  There are a tone of metaphors in this episode and it’s impossible to catch them all upon first viewing.  Whether it be the idea of having answers Jane doesn’t know about inside her own head, Cliff breaking through a wall in Jane’s mind to get to those answers, or the idea of The Well and the darker truths that await the deeper you go into one’s own mind, “Jane Patrol” uses some horrific and significant imagery to convey a lot of truth to the audience.  Black Annis, The Well, Miranda’s station, and other horror elements work so well here because there is nothing scarier than one’s own mind sometimes.  It’s a brilliant concept full of important lines that are going to resonate with the audience.

The most important part of the episode is that Jane doesn’t get better.  She isn’t magically fixed when she comes to the surface, things aren’t all peachy with Cliff, Jane doesn’t have all the answers, and she still isn’t appreciative of the hope Cliff gives her.  That’s not how people work, and that’s not how mental illness works.  Instead, Jane’s status has gotten better and she’s found a reason to continue living in the real world.  The struggle is still there and the battle continue because mental illness isn’t a blitzkrieg, it’s a war of attrition.  Jane hasn’t won, she’s only found the strength to continue fighting, and there’s something we can all learn from that.

The only negative is that there should be some sort of warning that prefaces the episode.  It addresses some heavy and powerful topics very directly and that can cause a lot of pain for some viewers.  A brief warning to inform the audience before hand would be very respectful to the viewers and is appropriate for an episode like this.

“Jane Patrol” is a scary and heavy episode filled with important and powerful messages that more people need to see and hear.  It may not be the absurdist roller coaster ride we are all used to, but that doesn’t mean you’ll be any less affected by the episode, quite the opposite actually.  “Jane Patrol” is another look at trauma and mental health in ways that few other shows are willing to do and, once again, Doom Patrol should be applauded for the courage and care it takes to address these topics meaningfully.