Everyone needs a place to call home and that includes Sycorax. Lucifer’s decision to resurrect her is seen by the heavenly host as blasphemous. So, it will allow her to remain alive for only 3 days and then she will die and spend eternity in hell. But, Lucifer finally got her back and now he believes he has a plan. How can he pull off a blasphemous miracle with the host watching his every move? The answer begins with a sliver of moonlight. 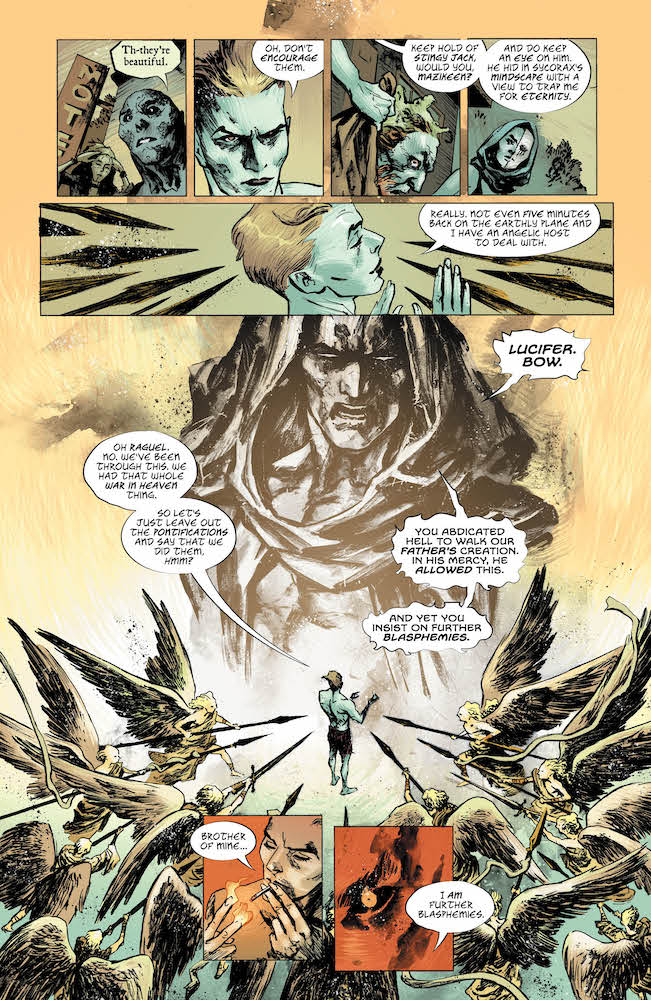 The Morning Star is in rare form when he is greeted on the street by the heavenly host. When his unclaimed son Caliban declares that the angels are beautiful, Lucifer quiets him with a warning that his praises only encourage them.

We get to see how the envious side of the First Fallen is a mask for a good deed when he tasks Mazikeen with keeping Sycorax safe. Which reintroduces the moonlight blade and its ability to cut through space and time and allow Mazikeen and Sycorax to go wherever they want.

This is another great storyline because Lucifer cannot be trusted to keep his word, the host is watching him for the next 72 hours. It’s a great layer of tension that forces Lucifer to work behind the scenes while appearing to perform his normal routine of hell-related duties. 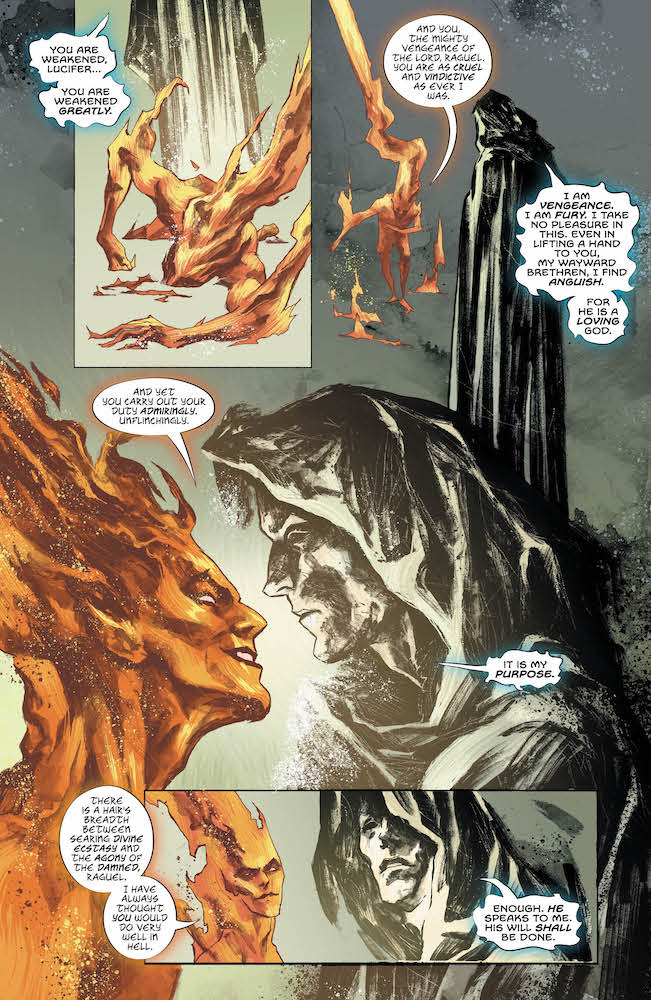 The caretakers who have been given dominion over hell in place of Lucifer are a comedic duo with a dry wit worthy of their position. Remiel the angel who talks and Duman the angel who doesn’t are a comedic nod to Penn and Teller, the Marx Bros., and so many others.

Sycorax is an unrepentant believer, just not a believer in the god of Lucifer or any need to be drawn into his familial squabbles. It’s something she says directly to the host, to Lucifer, and later she tells this to Mazikeen. It’s an attempt to warn her that Father of Lies will only discard someone once he no longer needs them.

Lucifer appears before the home of Anubis — the Egyptian god of the dead — with an offering. Of course, there are quite a few sayings about what happens when you make a deal with the devil. Even Anubis might have second thoughts before answering the door.

But two heads on a stick can be tempting in the land of the dead.

Raguel is just the worst kind of archangel. He is pious and stubborn. Raguel defines anything outside his narrow interpretation of what is allowed as blasphemous. His response to Lucifer makes it easier to root for the “bad guy” who in comparisons makes the “good guy” look vindictive in spite of repeated claims to be motivated out of love.

Lucifer is clearly fighting to keep Sycorax alive for his own reasons, despite claiming otherwise. The time alive allows her to make amends with her son Caliban and it is a tender moment that leaves the reader rooting for Lucifer to find a way to let them spend more time together. But, something about the closed doors to the enclave of Anubis feels uninviting.