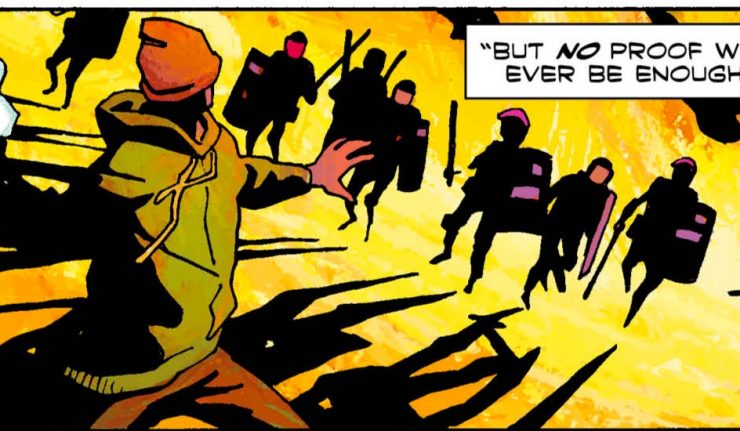 Richard is trapped. What began as a routine undercover mission for his next paycheck has devolved into a nightmare of mortal consequences. Having disrupted Wynn’s inner network and catapulted well past the point of no return, Richard fears he must sever himself from Sheila’s original assignment in order to survive—but before he can implement their final plan, a revelation from Jennifer forces him to accept his ultimate function within Wynn’s white nationalist empire.

Ben Oliver’s cover is cool. The card motif is solid and works well with the events of the issue. It looks great.

I enjoyed Wynn’s spiel about being an independent. It’s such a load of crap and it feels like a solid bit of satire. Coming after his super racist speech, it is very funny and effective.

Wynn’s racist monologue is a little much. He is very obviously the villain and the book is framing him as that. But a solid chunk of the book is dedicated to this dialogue. It’s uncomfortable which is the intention but it’s not saying anything. I already know this dude is racist and evil; it’s issue six. The only real plot point occurs at the very end. The issue feels padded and this sequence goes on forever.

I continue to dislike this art. When it uses silhouettes, it is slightly more effective. But anytime I’m looking at a face is the opposite of fun. There is one sequence with Wynn where I had no idea it was him until the other character said his name.

I do not care for this issue. There are a couple of scenes that are okay but it’s mostly dull and unpleasant. The art only makes it worse.