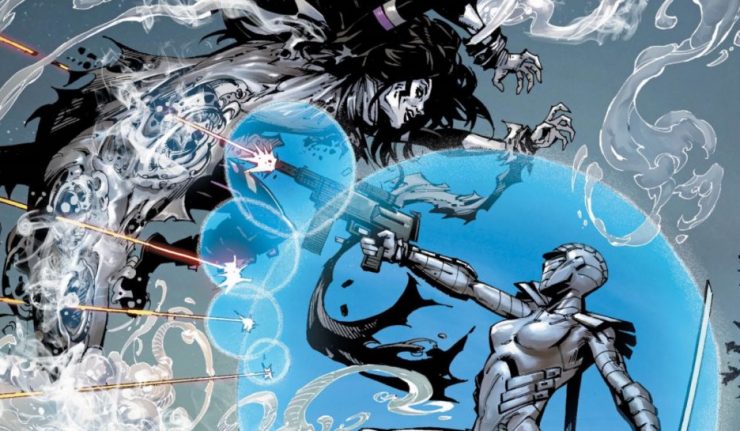 “I can take what I like….live a little.  My whole life.  I’ve been a specimen.  Property of Talia Al Ghul” – Smoke…..Honor and Talia’s newest sister.
Talia Al Ghul’s new sister is not playing.  She has been kept in a cell her entire life, and now she is free and ready to explore.  She’s not too happy with Honor/The Silencer as well as these three sisters are not playing in the same sandbox very well.  After an escape from her prison, Smoke is making her way to Honor’s home as she wants to live a little.  And all Smoke needs right now is a rental car…. As Talia and Jonah Nine watch via satellite, they immediately recognize that Smoke is not going to be an easy one to take down as her powers are way too unconventional.  Honor wishes to talk to her sister, and Smoke has had enough.  Through their conversation, Talia realizes that the mind wipe she thought had occurred in Honor didn’t happen via the Lazarus Pit.  An all out battle ensues where Honor “silences” Smoke forcing her body to be solid.  However, Smoke has other skills and over powers the Silencer. Smoke escapes and via her powers learns of a weapons supplier who can aid her in her “mission”.  Honor talks to Quietus as she patches herself up and asks for twenty-four hours to make all of this right.  As Smoke forces the arms dealers operating out of a chop shop to provide her weapons, Blake Guest gets a phone call warning him to get himself and his son out of the house.  As he is on the phone, a window opens and in walks….his wife….the Silencer.  Momma’s Home!

This issue’s emphasis on Smoke is wonderful.  The big three, Talia, Honor and Smoke all in one issue and it delivers.  Talia needs to engage in battle as watching from afar may not be how to clean up this mess.  However, it is revealed that Honor is not as brainwashed from the Pit as she thought.  It’s an ultimate game of paper, rock, scissors as we are getting a glimpse of the three sisters and what war is coming.  Smoke is shaping up to be a pretty solid villain and Florea draws the three sisters with a special touch!  These three strong female protagonists are drawn perfectly and V Ken Marion and Dan Abnett are telling a story that will shape up future Leviathan issues that will shape the DC landscape.  I love the rhythm of the story telling, so this is a great time to buy into the Silencer.  DC did a great job propping up this new character with the Batman family and placing her in the Al Ghul side.  She’s a keeper!  And so is Smoke!

None here!  The art is wonderful and the end line….Momma’s Home!  That is spot on!  And makes the reader want to immediately camp out at the nearest comic store!

These three sisters are awesome!  In a world that could only have one Talia, we now get Honor and Smoke!  Can it get any better?  I sure hope so!  Mom’s Home and she’s expecting guests!  It’s going to be quite a family reunion!