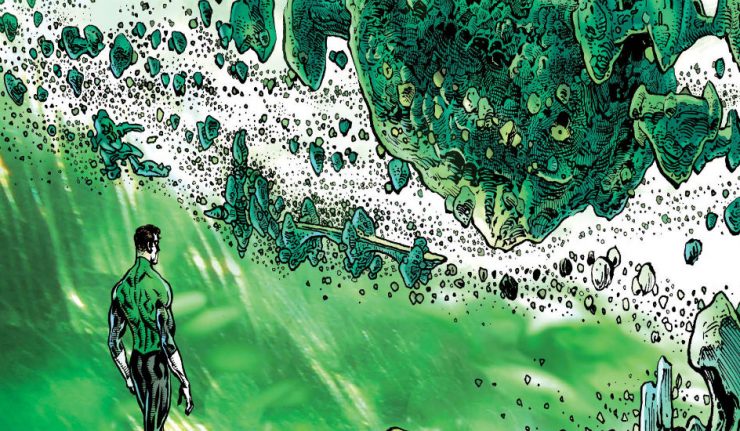 An impish fellow slants a rhyme as the wizard Myrwhydden sleeps, but heavens child, “Don’t wake him!”  In the Green Sands Resort, home for those of his kind, the wizard believes he relaxes peacefully.  But, Pengowirr carefully makes her way through the land, avoiding Myrwhydden’s patrols as she does every night.  Tonight is different, a stranger appears, lost and confused.  With a bit of investigation, the stranger comes to.  “I know where I am, and my mission!” he exclaims.

Hal Jordan realizes he’s in his ring, that his ring has miniaturized him in order to save him.  He also recalls that a wizard, Myrwhydden, had been imprisoned inside the ring by the Guardians of the Universe and was left to believe he was on permanent vacation at the resort of his choosing.  Who then is the green maiden, Pengowirr?  Hal figures it out just in time as he has to convince her to trust him.  And, his voice becomes familiar.  Pengowirr is the sentience in the ring.  And together they find a way home to Oa before the ring runs out of charge and everything in the ring dies!

Morrison takes a different approach to this story as he tells the majority in prose with no dialogue till the last quarter.  It certainly begins uniquely as it seems to begin as a Celtic fable, or myth.  Even Myrwhydden appears to be a Welsh name with the “dd.”  This non-standard approach really grabs the readers attention and signifies that this will also be an unusual story.

Even though Pengowirr is not a real person, Hal feels a connection to her as if she were a living breathing entity.  He holds her warmly, and encourages her as he would anyone else.  Pengowirr’s reaction is just as intriguing as she reacts to the sound of Hal’s voice, or rather the power of his will as it guides her.  Additionally, she remembers Abin Sur, the previous wearer of the ring.  This gives Pengowirr an identity beyond Hal, though she knows she is linked to him as she calls him her symbiote.

As Hal successfully charges the ring in time, he no longer thinks of the ring as just a piece of technology or advanced magic, but he identifies with Pengowirr, and considers her death as unacceptable as any other creature in the universe.  This fundamentally changes how Green Lanterns interact with their rings.  No longer is the ring a faceless, emotionless machine, but now, Hal has an image of a beautiful green maiden, just as fearless as himself that he relies on for assistance.  It’s the complete anthropomorphic transition of an iPhone’s Siri.

Especially notable this issue are Sharp’s colors, there isn’t a boring green in his palate despite being inside the ring.  It’s an exceptional job of finding many different greens to make it believable that the story takes place in the ring while at the same time not feeling obliterated by a green haze.

The issue sets the reader in an unfamiliar place, in an awkward attitude with the style.  However, as Morrison leans hard into Hal and Pengowirr’s emotions near the end, it is all worth it.

The only true negative is one of continuity…as I asked back with issue #1, “what happened to the ring Hal created with his own will?”  That was not the ring Abin Sur wore, and yet Hal again wears his ring again in this issue.

This is one of those issues that is better on the second reading.  All of Morrison and Sharp’s indications of the truth are clearer with the knowledge that Pengowirr is the sentience of Hal’s ring.  This opens up a completely new manner of depicting Green Lanterns and their rings.  It fundamentally changes the way Lanterns interact with their rings, and goes a long way in explaining how Hal is able to constantly put his life with the Corps ahead of his relationships on Earth.  Is Hal more committed to Pengowirr than anyone else?  Does this explain his actions?  Or, is it all how Hal imagines his ring as he faced a near death experience….?