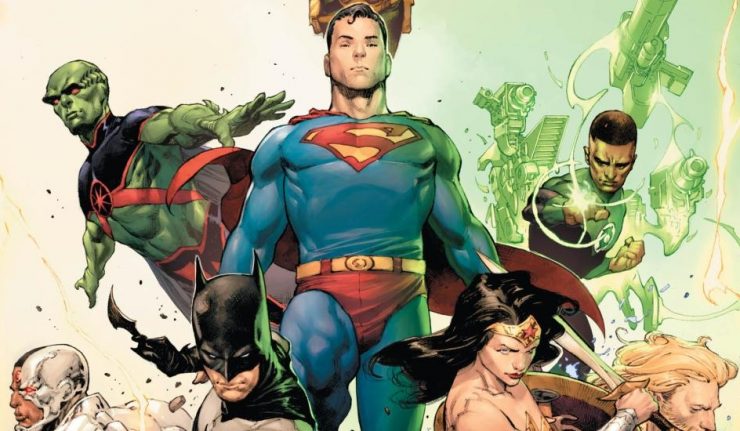 Justice League #23: “The Sixth Dimension” chapter four! Our heroes have been banished to the prison planet of villains by the World Forger. Stuck with no way of escape, the team hatches a plan to defeat the World Forger and get back to their dimension with the help of a new ally, but where is Superman?!

Snyder’s back to pen Justice League #23, but in this issue, he’s concentrating on driving the plot forward rather than adding complexity to the underlying cosmology underpinning the story, so I didn’t find that the story suffered any issues that might hamper reader comprehension.

Most of the Justice League find themselves on the Apokolips of the Sixth Dimensional version of the DCU. In this version of the universe, the Justice League has imprisoned all their villains, with no chance for redemption or remorse. The World Forger, in the guise of Superman, has led the League to treat the villains unjustly. Which is done for to bring about a universe aligned with Justice instead of Doom.

Thus, we see the ultimate choice for the fate of the Multiverse is one of whether the ends justifies the means. And the person that ends up representing the Justice League in making that choice is Batman. Furthermore, it appears that Batman is inclined to do as the World Forger wishes.

Also, I find it interesting that in a universe where the Justice League has acted unjustly, that there appears to be a resistance force represented by members of the Injustice League and DC’s primary villain Darkseid. It’s interesting that the League moving away from Injustice seems to have pushed some of their worst enemies towards it.

Also, it allows for a delicious play on the Mister Miracle series’ tag line when the Flash asks who’s piloting the Legion of Doom’s ship and the pilot answers, “…Darkseid is.”

Plus, I loved that we got to briefly see Superman’s son Jon once more at his proper age, if only in a flashback. While Brian Michael Bendis is providing a good story in the Superman book’s, I really do not like the new status quo he has given Superboy.

I have severe doubts that the World Forger is truly creating a universe aligned with Justice and not Doom. I don’t see how getting the Justice League to perform injustice against their enemies can produce a Just world, even if it presents itself as a paradise.

Even more so, I can’t believe that a just universe could arise from the act of Batman betraying Superman. But even more unbelievable is the idea that Batman would actually do so.

The story stresses that Superman as a man who would never compromise his ideals to accomplish an end, no matter how necessary or noble that end is. Also, it portrays Batman as a pragmatist that will make that compromise if the end was worth it.

However, I think that ultimately, Batman is even more uncompromising that Superman. I can’t believe that Batman would betray Superman. Nor would he countenance the imperfect world he knows being destroyed, even if it was being replaced with a perfected Utopian version of itself.

If we are to take Snyder’s story at face value, this is a gross perversion of the character, and I would have to conclude that Snyder does not understand Batman at all. However, I suspect that Batman has something up his sleeve and isn’t really betraying Superman, the League, or the DCU.

I have faith that Snyder’s a better writer than that. I can’t really picture Batman as the League’s moral weakest link.

The League’s outing to the Sixth Dimension wasn’t what I was expecting. However, it’s proven to be an interesting story that has added a lot of depth to the cosmic goings-on in the DC books over the past few years. With each chapter, it becomes clearer that the DCU is headed for a major occurrence that somehow dwarfs any event preceding it. Whatever it is, it seems the Justice League is in the thick of it, so keeping up with this title is essential. Luckily, it’s also a tremendously exciting story too.