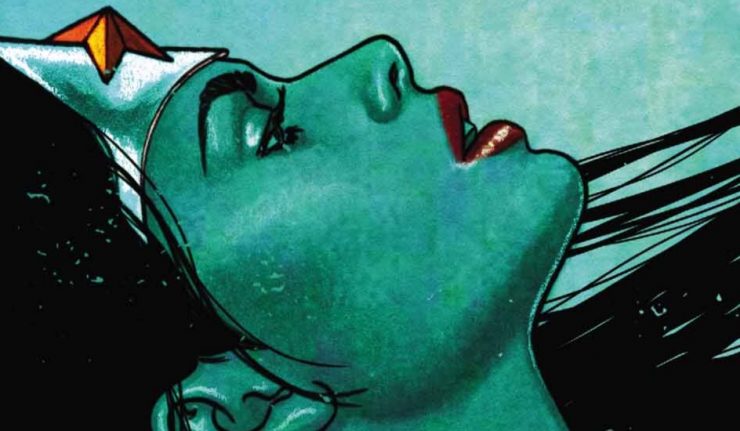 Wonder Woman and the goddess of love, Aphrodite, are pretty sure they’ve found Aphrodite’s missing son in this unremarkable suburban town—the fact that everyone here is compulsively driven to act on their secret desires is an awfully big clue! But if they actually want to talk to him, they’ll have to get through a flying army of…attack cherubs?!

The issue tackles an interesting problem with Diana’s relationship with Steve Trevor. He is going to age like a normal human and eventually die; she will not. She will have to watch Steve fade away. This would be more interesting if that story could ever be told but the potential for it is still interesting. And I like that it’s a major fear Diana has.

The conflict between Wonder Woman and Atlantiades is fun. The former’s ability to resist the latter’s temptations frustrates Atlantiades. This idea keeps cropping up in G. Willow Wilson’s Wonder Woman stories. Giganta had similar conversations with Diana dealing with Wonder Woman putting everyone’s desires and needs over her own. I like that there is a consistent theme running through the various stories.

The cover is well drawn and looks good but it’s a little weird. Diana faces Atlantiades and has a look of surprise. The text throws me off; she seems to recognize Atlantiades implying that there’s some kind of reveal. There’s nothing in the book that relates to that. Steve Trevor shows up a little later so maybe it has to do with that but it comes across awkward. Maybe this is a situation in which the cover was drawn far in advance and the story changed in the meantime.

I’m not in love with the art. Stylistically, it does nothing for me. The colors are nice but there is a lack of detail that I find unappealing. Additionally, there are sections of dialogue in which the panels focus on something besides the face. It’s weird to look at Diana’s skirt while she’s talking.

This is a solid issue. I like the themes Wilson is dealing with and they form Diana’s arc. It helps these stories feel more connected. It becomes more clear with each issue that Wilson has a defined take on Diana that she is willing to challenge and explore. I don’t love the art but the issue is still enjoyable. 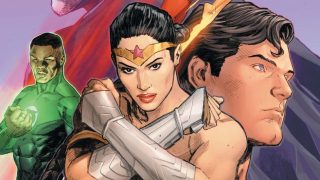