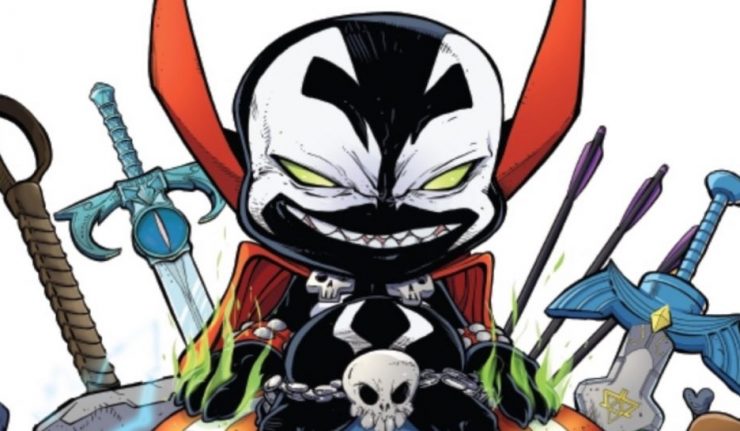 Artist: JJ Kirby and Will Robinson

“I’m back and I am killing it!” – Spawn Kills Everyone

Todd McFarlane takes a break from the seriousness of Spawn and provides a retrospect of pop culture that pokes fun at everything we currently value on the movie, television, and comic convention front.  This

Immediately upon looking at all the characters that appear in this book, it took me back to Spawn issue #10 where Spawn is in the seventh level of Hell and he is in a prison for licensed superhero characters and the creators that gave them up.  It’s an enduring image of the serious Spawn books, but arguably history has come to fruition.  Spawn Kills Everyone is arguably a Deadpool homage where Deadpool killed everyone in the Marvel universe.  However, here, Spawn Kills Everyone takes on Indiana Jones, the President of the United States, The Walking Dead (Spawn plus Lucille equals a pretty gruesome and bloody sight) and the list of heroes and villains goes on and on.

Nothing is sacred as Spawn and his “turd babies” drive the kill count up and up!  It’s hard to make Spawn a lovable character, but McFarlane does it as he paints a “mini Spawn” living in a real world and subsequently gives him a Disney character makeover – Stitch anyone?  It’s hard to not look at this version of Spawn and not conjure up a homage to Stitch from Lilo and Stich.

“Somebody call me a doctor!” – Van Halen.  No….Van Halen is not in this issue, however, Dr. Doom, Doctor Strange, Dr. Fate and Doctor Octopus…all in one visit.  Pure comic genius and cameo gold!

From movie sets to comic conventions to personal visits to heroes’ homes.  Captain America’s assassination is quite the commentary on our neighbors to the north (But McFarlane is Canadian).

And Spawn Kills Everyone homage to his “turd babies” are something akin to Mr. Potato Heads who simply wish to please Spawn.  And given the Infinity Gauntlet’s recent popularity in the cinema, who knew the Violator/Clown could wear the glove with such ease.

This is satire and art at its finest!

This is clearly an industry tongue in cheek story that is akin to Bugs Bunny poking fun at what is going on in pop culture.  Spawn’s out to be number one in any way possible and while we have all thought about how to “off” the Teenage Mutant Ninja Turtles, Spawn actually cooks them up in Turtle soup.

If you can buy into the story line, you simply see it is a wonderful tapestry of comics and a creator that doesn’t take pop culture as serious as some others do.

As a collector, it is fun to see this type of comic.  Don’t take it too serious and you’ll be entertained! You get to see McFarlane art and tongue in cheek references.  This is not a serious issue, but it gives you some really cool “What If….” moments and the art of McFarlane’s portrait of the Clown as Thanos is more than worth the price of the trade paperback.  And if you are into toilet humor, then it’s your cup of bran as well!